The Walking Dead has been entertaining us for 9 long years and according to reports, another 3 seasons and a movie featuring the return of Rick Grimes are still expected. That leaves a lot of room for fans’ imaginations to run wild. Both the TV show and comics don’t seem to be ending anytime soon and overtime, viewers have come up with possible scenarios of how The Walking Dead will end.

Some of these prophesies are rational, while others are probably never going to happen. But don’t rule them out just yet, have a read and see if any of these Walking Dead theories make sense to you…

Theory 1: Rick Realizes It Was All a Dream 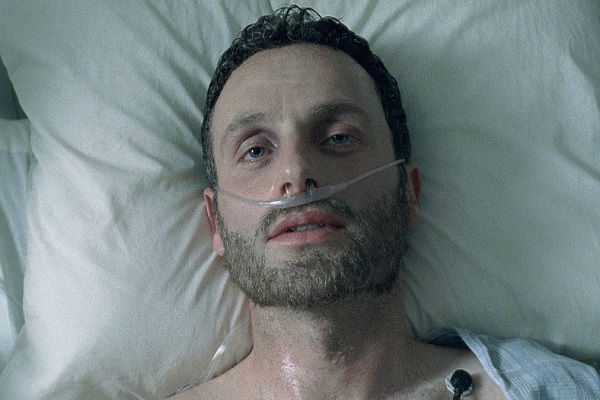 Could The Walking Dead pull a Wizard of Oz? Is Rick Grimes your modern-day Dorothy? Think about it, what’s the worst dream you could possibly have? Finding yourself in the midst of a zombie apocalypse is exactly what nightmares are made of! Perhaps Rick stayed in a coma and dreamed the whole thing.

Imagine; the end of the upcoming movie would show Rick waking up from a horrible, drawn-out dream in a hospital bed with his wife, Lori and son, Carl looking over him. Perhaps Hershel Greene was his doctor, and Maggie, Carol, Michonne and the rest of the crew were hospital staff! Now that’s a fan theory that would trigger a riot among fans!

Theory 2: Rick Turns Out Crazy, He Imagined It All

Rest assured. The creator of The Walking Dead comic-books shot the first theory down in flames. In 2014, Robert Kirkman confirmed via Twitter that Rick definitely isn’t in a coma.

Going on record to answer this: http://t.co/3lhUI6A3bW Rick is NOT still in a coma. The events of TWD are definitely happening.

But then he dropped this bomb minutes later, throwing all fans off balance.

But Carl and everyone else are all imagined. He actually NEVER found his family. He’s been crazy since he killed his first zombie. #joking?

So, Rick is just a walking, lonely lunatic, making up crazy events and people in his mind? He even imagined his own ‘death’ that we saw in season 9? That’s a little far-fetched. We’re pretty sure he would have been ambushed by walkers by now, right? That leads us to the next theory…

Theory 3: Rick Turns Into a Walker

There is indeed a Walking Dead movie in the works and as mentioned earlier, it centres around Rick Grimes. What if he becomes the enemy? What if the leader of the pack actually turns? I mean, it’s shocking enough that he’s made it this far after countless near-death experiences. Maybe Rick’s time to die will finally come during his movie.

Perhaps he will sacrifice himself for Judith and R.J. Grimes, leaving one of his gang-members no choice but to shoot their Walker-leader in the head. Parentless Judith and R.J, a gang without their front-runner and a movie without its main character. That would definitely call for the end of a TV show.

Theory 4: Everyone Gets Bitten By Walkers

If you thought Rick turning was a bleak ending for The Walking Dead, wait until you hear this grim ending theory. Can you imagine watching a show for 12 seasons only to see everyone get wiped out? Those Walkers may just get the upper hand at the end of all this and feast on every single character.

Tara, Carol, Daryl and every other main character could meet a diabolical end before the popular television series comes to a close. Everyone ultimately becomes the walking dead, meaning that their fight for survival throughout this show has been pointless.

Theory 5: They Find a Cure

On a more positive note, maybe a cure isn’t far from reach. Edwin Jenner from the Centre for Disease Control couldn’t find it back in season 1 but who’s to say there aren’t more mad scientists out there cooking up something that could save humanity? We’ve still got 3 more seasons to go until the curtain closes which leaves a lot of room for our fave gang to make the breakthrough. This theory suggests a happy ending and a pretty predictable one too.

Theory 6: Walkers Will Evolve and Take Over

Is there a possibility that Walkers could evolve? They might be soft in the head (literally) at the moment but what if these zombies learned to use their brains one day? They might start putting those mushy brains to use and begin forming organized hunting parties. Humans will have to put a lot more effort into killing them, that’s for sure and the end of days will certainly be nigh!

Theory 7: There Will Be a Civil War

Walkers aren’t the only threat the Walking Dead gang have to face. Up until now, we’ve learnt that humans are also the enemy. We’ve seen the Governor, the butchers at Terminus, the Wolves, the Saviors and the Whisperers try to take everyone out. It could be that The Walking Dead is leading up to a civil war between humans. It is a case of survival of the fittest, after all.

Theory 8: The Walker Population Dies Out

For the past 9 years, we’ve been watching the living trying to kill herds of the dead. God knows how much of the Walker population has actually been wiped out. It must all end somewhere, right? There has to be a limit at some point.

Maybe the gang will finally exterminate and lower the population of these zombies once and for all. It would undoubtedly take years and years (probably another 10 seasons) but it’s possible. It’s just a matter of surviving, which by the looks of it, the group are pretty capable of. Once the Walkers are gone, the rebuilding process can begin. Is this how The Walking Dead will end?

Theory 9: The Group Settle on a Remote Island

A safer and easier option for the group would be to fly across the ocean to live a new life. There’s the possibility of finding a remote island across the country where the group could flee to and build a new life. This ending theory claims that a new society could be built (Walker-free) and re-population could begin.

This ending sounds a little too good to be true and rather boring, too. We don’t want to see America get completely abandoned and overhauled by Walkers. We want to see battle and bloodshed. An escape may be the easy way out for these characters but we want more action! That would be a disappointing way to wrap things up.

After several battles and walker fights, it’s only a matter of time before our favorite TWD characters start dropping like flies. Imagine if Judith, R.J. Grimes, and baby Hershel were the only ones left on the show. With their parents gone, they would have the responsibility to restore the world and make it a better place. The last 5 minutes of the final episode might show the younger generation – in 10 years time.

Some of these ending theories were off-the-wall while others sounded rather promising. Nevertheless, we’re sure they call for a fun debate. Do you agree with Tell Tales’ Walking Dead theories? Have your say below and fill us in with your interesting ideas of how the show will end…

Watch 10 Best Walking Dead Theories – How Will It All End?