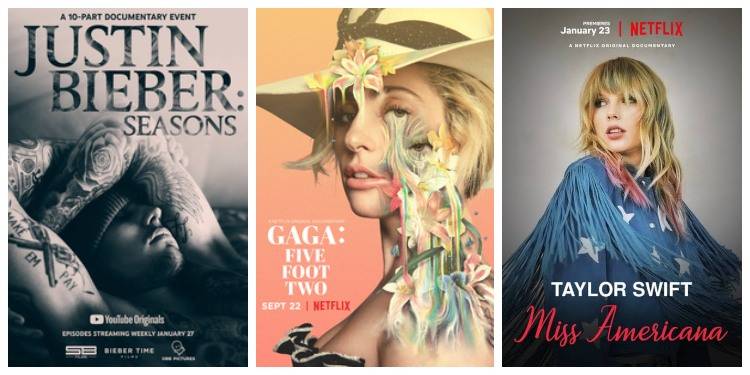 With Instagram and gossip sites, we might assume that we have a good insight into the lives of the rich and famous – but they literally just brush the surface!

If you really want to see how your favorite celebs grew up and what their day-to-day lives really look like, these must-see documentaries give you just that.

From Beyonce’s breathtaking comeback Coachella performance to Chris Brown’s confessional documentary, you’ll have a front seat for the very best celebrity entertainment – all from the comfort of your couch!

So, let’s dive right in and uncover the 12 best celebrity documentaries around.

1. Homecoming: A Film by Beyonce

Beyonce is one of the few celebs that has managed to keep her private life out of the limelight and rarely shares snippets of what happens behind cameras. That said, this Netflix documentary series shows us how Queen Bey prepared for her comeback after giving birth to her twins, Rumi and Sir with her epic Coachella performance.

This jaw-dropping documentary shows Beyonce’s incredible work ethic and her commitment to leaving a legacy as the first black woman to perform on the main stage at the world’s most iconic music festival.

This 90-minute documentary takes us on a personal journey, showing how Taylor Swift has struggled with keeping up her ‘good girl’ persona, battled with eating disorders and spent years beating herself up over bad press.

Miss Americana shows the making of Taylor’s album Lover, her release of insecurities and her decision to take a stand in politics and actually express her thoughts and feelings. Ultimately, this documentary shows how Swifty stopped being a young girl and blossomed into a strong and powerful woman.

This emotional celeb documentary shows Lady Gaga in her most vulnerable state. We see the performer working on her most personal album yet – Joanne, and her blossoming relationship with producer, Mark Ronson.

We also get an insight into Gaga’s daily battle with a chronic illness; the star is open and honest about how she’s struggling with fibromyalgia and the daily treatments that she has to try and overcome the pain. A definite must-watch even if you’re not a huge fan of Lady Gaga.

We all know how Demi Lovato struggled with alcohol and drug addiction from her numerous visits to rehab, but we’ve never had a real insight into what drove her to such a low point. Within this YouTube documentary, we see how Demi struggled with childhood stardom, her experience with bullying and addiction and her painful heartbreak.

The brutally honest documentary shows us unseen interviews and recordings of Demi that will make you a fan of the star, if you’re not one already…

5. One Direction: This Is Us

If you didn’t watch the boys rise to fame on the UK’s X-Factor, then don’t worry! The documentary series ‘This Is Us’ shows how One Direction rose to fame, became a global sensation and stayed true to their roots at such a young age.

Although this doesn’t show struggles, heartbreak and intimate details like some of the other documentaries on the list, it does let us reminisce on One Direction’s music as the short-film follows 1D on their 2012-2013 tour.

Amid her breakup with her ex-husband, Russel Brand, we get a unique insight into Katy’s personal life. She shares her strict upbringing, her struggles to fame and shows how she pushes her limits to deliver her lifelong dream of performing to her fans.

This music documentary follows the singer on her yearlong California Dreams tour, so if you’re a superfan, you get to relive some special moments of Katy Perry’s extravagant concert.

This family documentary shows how The Jonas Brothers grew their relationship from being just siblings to bandmates and how their brotherly bond was tested as they rose to fame. It gives an insight into the band’s breakup and what truly happened that led the brothers to press pause on their band.

We also get to watch their reunion and how the Jonas Brothers pull together to rise once more!

Amy Winehouse was a true musical talent that lived a troubled life. This British documentary gives us a real insight into Amy’s struggles and battle with drugs and alcohol. Showing us never-seen-before home videos and voicemails, we get a small glimpse of how the celebrity was living, how she spiralled and messed up gigs – leading to her death at the young age of 27.

You might know Travis Scott as Kylie’s baby daddy, but his documentary “Look Mom I Can Fly” shows Travis’s craftsmanship and dedication to his music.

With never-seen-before home videos, Travis takes us through a journey of his childhood and upbringing in Houston. We see how a small-town rapper made it big, won Grammys and collaborated with his favorite artists while staying humble. We also get to view touching moments of Travis with his daughter Stormi – proving that his greatest achievement in life (beyond his music) is his beautiful daughter.

10. Michael Jackson’s This is It

This creative music documentary walks us through the months working up to Michael’s comeback ‘This is It’ tour. Sadly, the King of Pop died just a few months before he was supposed to set the stage – but lucky for us- his choreographer directed this insightful documentary, showing us how Michael was preparing for his tour of a lifetime and gives a glimpse of who he really was – despite all the controversy he’s been placed under.

11. Chris Brown: Welcome to My Life

Chris Brown is a talented musician whose reputation was tainted at a young age because of his altercation with his ex-girlfriend, Rihanna. This intimate documentary doesn’t excuse his abusive behavior, but does give us an insight into his troubled relationship, his regrets and the love that he still has for RiRi.

Besides his personal life, we also get to see how Chris rose to fame and how he continues to develop his craft, push boundaries and make legendary music for all of his fans.

If you’re not a Belieber already, this 10-part documentary series is bound to make you one! A vulnerable Justin shows an in-depth insight into his life whilst talking openly about his mental health, his music-making and his relationship with his beloved wife, Hailey.

The short episodes will have you laughing, dancing and crying as you get to see Hailey and Justin tie the knot and sadly watch Justin Bieber uncover his struggle with a chronic disease and drug addiction.

So, there you have it! The very best celebrity documentaries that have been released to date! There are enough on this list for you to binge-watch during self-isolation and quarantine!

Let us know which one is your favorite by dropping a comment in the section below!