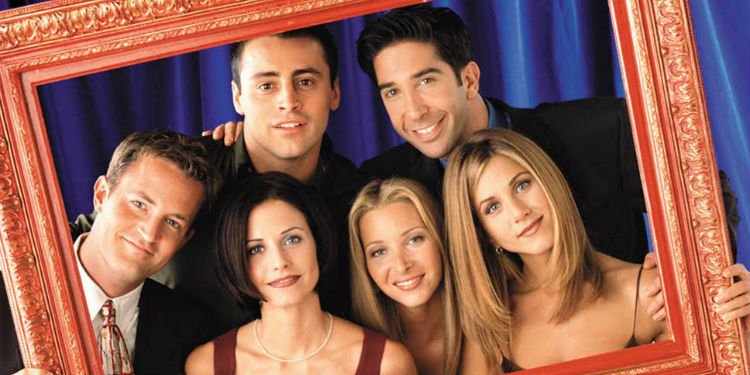 When it hasn’t been your day, your week, your month, or even your year, Friends is always there for us…

It’s been over 20 years since top TV show, Friends hit the small screen. Our lives got a whole lot funnier once Ross, Rachel, Monica, Phoebe, Chandler and Joey came into our lives. From Phoebe’s Smelly Cat song to Ross’ fake tan, the cherished characters have had us crying tears of laughter. The fabulous ensemble still grace our television screens and cheer us up to this very day…

We’re about to take a fun trip down memory lane and pick out the very BEST Friends moments. Here are Chandler, Rachel, Monica, Joey, Phoebe and Ross’ funniest scenes…

Ross and Rachel’s breakup is probably the biggest controversy in sitcom history. Rachel is mad at Ross for hooking up with another woman, but he insists they were on a break when that happened. Were they? Weren’t they? I guess there will never be a definitive answer to this famous line. But the multiple times we heard Ross yell, “we were on a break”, especially in this particular scene, were altogether hilarious, but somewhat heartbreaking, too.

2. Ross has a Leather Little Problem

Ross sits next to a date in his fancy leather pants while we laugh along to his inner monologue about how uncomfortable they are. Ah, we’ve all been there, right? Nothing more hilarious than seeing our easily panicked Ross as he uses the toilet and struggles to take off those complicated trousers. First the lotion, then the powder – watching Ross wrestle these leather pants was TV GOLD!

3. One Spray Tan too Many

Ross is determined to get a tan – unfortunately, he counts a little bit too far and gets a color that is more orange than planned. A cautionary tale against using the “mississippi” counting technique while trying to get a golden skin tone. But at least it’s great comedy material! And he ended up getting the greatest spray tan in history, too.

You know you’re a Friends fan if you can’t eat at a Japanese restaurant without thinking of Ross and Unagi. When Rachel and Phoebe tell Ross they’re taking martial art classes to defend themselves against potential threats, Ross tells them that the best technique is called “Unagi”, a name Rachel and Phoebe are convinced belongs to a type of sushi. This premise leads to a handful of gags we won’t forget before a while.

5. Ross and his Keyboard

Thought Pheobe’s singing was terrible? Wait until you hear Ross’ musical skills. Putting Ross and a keyboard together can only result in something legendary. He’s adamant he can play professionally… until the weirdest sounds come out of the instrument. But hey, all art is subjective. This goes down as one of the best Friends scenes, especially if we’re counting Ross’ hilarious expressions throughout.

Is there actually anything better than fat dancing Monica? Monica’s dance moves when she was younger were nothing short of hilarious, and we can’t help but love that flashback when she gives it her all at a college party. Confidence is the best dance move a girl can own!

Thanksgiving might make some people happy, but not Chandler because his parents got divorced on that day – a memory that still haunts him in adulthood. Cue Monica to cheer up her boyfriend by putting a cold turkey on her head – which somehow leads Chandler to confess his love to her! We love Friends best when declarations of love are made in the weirdest of circumstances. A scene that is so ludicrously uncomfortable, but priceless!

3. Sick but Still Got It

Sicker and snottier than ever, Monica insists on Chandler following her to bed and attempts to seduce him even with a runny nose. She tries everything to drag him into bed but Chandler doesn’t exactly feel like catching the same cold as her. An iconic scene if we’ve ever seen one, especially as Monica starts undressing herself but can’t stop coughing.

Every Friends fan has learnt the choreography. This wonderful dance number from Monica and Ross is probably the best dancing moment from the show. What is more epic than the best TV siblings busting a move like no one is watching? Nothing, that’s what.

Monica is known to be the most motherly character of the group, but maybe the moment when she starts vacuuming the vacuum cleaner is taking the hygiene obsession a bit too far. Being a perfectionist is great until you start cleaning the cleaning utensils…

Every Friends fan ever has one day used the line “Joey doesn’t share food!” A non-sharing policy that no one masters better than the fun guy of the gang. For Joey, food is like toothbrushes: it belongs to only one person and it will only go into that person’s mouth. Fair enough! He made greediness acceptable.

This is by far the most quoted three words from the show and we understand why. Joey’s terrible, yet perfect pickup line is legendary, but it really depends on who he is using it on. From downright rejection to a woman replying with a frightening “I’m okay”, results really vary. If you’ve been brave enough to try it in 2020, share your experience in the comments.

Dr. Drake Ramoray, Joey’s soap opera-ish television alter ego, is not exactly Oscar-worthy, but who can forget the hilarious scene where Joey explains to his friends, as they’re about to watch an episode of his show, how he mastered the thoughtful glance which he calls ‘fart acting’.

4. Could Joey BE Wearing Anymore Clothes?

After Chandler hid his underwear, Joey decides to raid his own wardrobe to get revenge. Nothing funnier than bitter Joey showing up in Monica’s apartment wearing twelve different outfits on top of the other to make a point. At least he’ll be able to spare some money on the heating. “Hi I’m Chandler, could I BE wearing any more clothes?” EPIC!

Trying to decide which matters most, food or sex, Joey is at a dead-end. Deciding that he wants both, joey delivers yet another quotable line, “I want girls on bread!” That sounds like a logical decision when you really can’t choose, but we’re hoping he didn’t eventually try it…

A list of Rachel’s best moments isn’t complete without that labor headbutt scene we all cry-laughed at. Rachel is in intense pain during that scene and Ross’ determination to help his beloved seems like he might as well be giving birth himself. One of the greatest Ross and Rachel scenes, if you ask us!

2. Eating off the Floor

When you drop your precious cheesecake, pull a Friends move and eat it off the floor! As Joey said, food is life! We can’t forget the glorious image of Rachel and Chandler eating a most delicious cheesecake from the floor after it fell because they were fighting to have it. Friendship, you all!

Rachel isn’t always the wildest one in the group, but when she does put on a show, there’s nothing quite like it! Who can forget that episode in Vegas when Rachel gets maddeningly drunk, draws a moustache on her face, and starts using Joey’s famous pickup line, “How you doin’?”like she owns it? Rachel is sure at her funniest when she’s been drinking…

Rachel’s incredible spending mistake on an overly expensive cat that doesn’t have fur turns out to be the fuel for one of the most hilarious episodes on the show. First of all, the friends insist that Mrs. Whiskerson is more alien than cat, second, Rachel rapidly realizes that the cat is actually evil and determined to make her life a living hell.

5. When she Got off the Plane

Chandler isn’t a character super in touch with his femininity at first sight, and yet! The king of sarcasm is found in a bathtub after Monica teaches him how to prepare the best one… and it’s glorious. Nothing but respect for a man who’s confident enough to take care of himself without fearing judgement!

Knowing how good he is at one-liners, we expected Chandler to know his way around a slogan. And yet, when comes the moment to give the best ones for a potential job in the business, poor Chandler has nothing better to say than mediocre, cheesy ideas that leave Monica perplexed… one thing is sure, it’s iconic!

In this scene, Chandler explains to Rachel that he prefers not to dance at weddings. When Rachel asks why, Chandler shows her how truly, utterly bad his moves are… then Ross walks into the apartment and has to see a very awkward dance from his friend with no context. When it all goes to plan, do the Chandler dance!

When Chandler and Joey tell Rachel and Monica that they definitely know more about them than the other way around, the girls accept the challenge. But when the boys bet they’ll win the quiz and suggest taking over Monica’s apartment if they do, the girls are quick to lose and the boys enter their place triumphantly on the iconic dog statue. A more iconic moment there is not. And as sad as they are, at least Monica and Rachel can be certain they have the right friends!

This may count as one of Ross’ best moments, but Chandler pretty much ended up owning this scene by the end of it. He’s sick of trying to carry that sofa up the staircase and he’s well and truly tired of hearing Ross yell “PIVOTT” over and over again. What does Chandler do? Shout “shut up shuttupp shutaaap”. His expression is the epitome of FUNNY!

You can’t run through New York like that unless you’re Phoebe Buffay. What better scene than the one where Phoebe and Rachel go out for a run and the latter finds out her friend jogs like she’s escaping Godzilla? “Phoebe runs weird”, Rachel confesses to the other friends – like heck she does! But hey, it’s a run no one can ever shake off their minds.

If there is one thing Phoebe Buffay wasn’t exactly good at, it’s writing songs, but any Friends fan will tell you that they’ve ended up adding Smelly Cat to their playlists. The really, deliciously awful song Phoebe sings in Central Perk is probably one of the worst songs (with terrible vocals) our ears have ever heard, but it’s one that’ll go down in history. *Sings Smelly Cat, Smelly Cat, what are they feeding you?*

We still don’t know how the gang afforded living in amazing flats right in the heart of New York in their twenties, but the one perk it had was those huge windows from which they could see everything… like that moment when Rachel realizes that Monica and Chandler are starting to undress each other from the apartment across the street. Phoebe’s shocked reaction tops it all off, as she shouts “my eyes, my eyes!”

We’ve already established that Phoebe isn’t a musical mastermind or the greatest runner. We also know that she’s terrible at flirting and dancing. Remember when she fake flirted with Chandler after discovering he was dating Monica? Yeah, that dance move will really win the boys over, Pheebs!

Whether Phoebe is trying to be Dr. Regina Phalange, or Regina Phalange with a strong French accent, there’s no denying that the character’s best moments are when she constantly gives out this same fake name for no apparent reason. But hey, we wouldn’t like Phoebe if she wasn’t the embodiment of randomness!

It’s always fun reliving the best Friends moments. Let’s all raise a glass to the funniest TV show of all time!

Want more from the show? Have a look at our list of the best Easter Eggs in Friends that even die-hard fans probably didn’t notice…