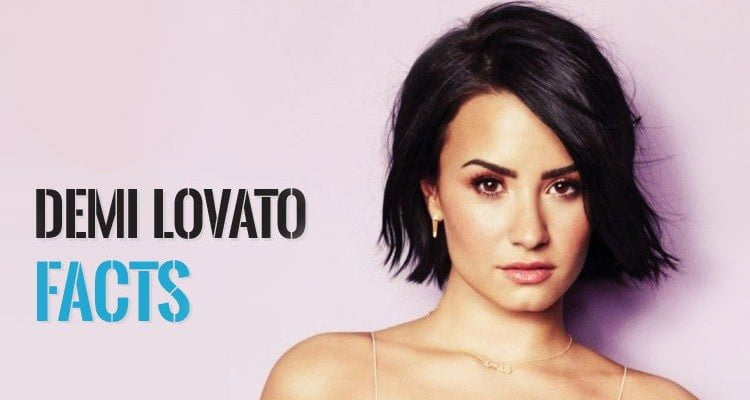 For some, she’s just another popstar but for Lovatics, she’s their personal hero. Demi Lovato is much more than just a singer. She’s an actress, a previous Miss Texas winner and one of the many faces for the Americans for Marriage Equality campaign.

If you’re new to the Lovatic fandom or if you simply want to know more about your favorite star, check out these 23 Demi Lovato facts that every fan should know…

1. Demi Starred in ‘Barney and Friends’ with Selena Gomez

Believe it or not, the Disney Channel isn’t the first place where Demi kicked-off her career. The Tell Me You Love Me singer began acting at the age of 7 when she starred in Barney and Friends and lived every little girl’s dream alongside longtime friend, Selena Gomez.

Demi and Selena continued their friendship after starring together in Barney and Friends and even went on to create their own YouTube show called The Demi and Selena Show. Ever since then, the popstars together go by the name of Delena!

Here’s a fun fact about Demi’s childhood! Her pretty face won her the title of Mini Miss Texas in 2000 – 2001! Apparently it was this big win that encouraged her to get more serious with acting and singing! You were born for the stage, Demi!

4. She Starred in Plenty of Disney Programs

Demi Lovato rose to stardom in 2008 when she was cast in Camp Rock. After releasing her debut album, Don’t Forget, the starlet received her own Disney Channel television series, Sonny With a Chance. Demi also starred in As the Bell Rings on Disney Channel, too!

If it weren’t for Miley Cyrus, it would have been Demi Lovato who was cast as the Disney darling, Hannah Montana. The popular star apparently auditioned for the role when she was 14 but failed to get the part. “I wound up not getting it but that’s how Disney learned about me”, Demi has said.

That’s right, Lovatics! Demi dated Miley Cyrus’ brother, Trace back in 2009. When they broke up, Trace said, “We gave it a shot and that’s all you can do”. People reported that it was age and distance that tore their relationship apart.

Demi Lovato sure loves ink! She has over 10 tattoos on her body including the words “Stay Strong” engraved on her wrist after suffering from emotional and physical issues. Demi also has a cross tattoo on the side of her hand and the words “You Make Me Beautiful” on her rib-cage which she got at the age of 16. Other tattoos include a feather, a string of birds and the words “Faith” and “Peace”. Most recently, Demi got the word “me” on her finger as a reminder that she loves herself…

8. Demi was Bullied at School

Demi shared a sad secret about her life back in 2012. She revealed to the world that she was bullied in middle school. Apparently she had asked her mom to be homeschooled after the seventh grade because she couldn’t take it anymore. We’re proud of her for coming out on top!

9. Her Sister was in Desperate Housewives

Demi is one of 4 sisters in the Lovato household! Her three sisters go by the names of Dallas Lovato, Amber Lovato and Madison De LaGarza who just so happened to star in Desperate Housewives as Juanita Solis. Do we have another rising star on our hands?

This piece of trivia is no secret! Demi is made up of many talents! Not only is she a fantastic singer and actress, Demi also plays the piano and guitar. Let’s not forget that she’s a songwriter too! She’s written almost all of her tracks!

11. Demi Went to Rehab for an Eating Disorder

Other than the bullying Demi experienced at school, her strict management was another triggering factor for her anorexia and bulimia as a teen. Demi admitted to Ellen DeGeneres that her former manager, Phil McIntyre, tried to control what she ate to the point where he would check her Starbucks orders on her bank statements. Her emotional and physical problems were so strong whilst touring with the Jonas Brothers, that she had to pull out and seek help in 2010 by entering a treatment facility.

12. She Admits to Self-Harming

During her rise to stardom, Demi was having such a tough time to the point where she self-harmed. In an interview with Self magazine, the singer revealed, “There were times I felt so anxious, almost like I was crawling out of my skin — that if I didn’t do something physical to match the way I felt inside, I would explode. I cut myself to take my mind off that. I just didn’t care what happened. I had no fear.” After leaving rehab in 2011 however, Demi was in a much happier place.

13. She was Diagnosed with Bipolar Disorder

Along with anorexia and bulimia, Demi also had to deal with another disorder. Telling People about her rehab stint in 2010, Demi admitted that she “basically had a nervous breakdown” and was eventually diagnosed with Bipolar at the facility. She told Women’s Health Mag that “for years, people said I was depressed, and I actually didn’t know myself why I was so upset and why I would have these episodes of mania—what I now know is mania.”

14. She Had a Drug Overdose

Demi has been open about her drug use in the past, admitting to “self-medicating” with cocaine and alcohol “like a lot of teens do to numb their pain”. However, after several bouts of rehab, Demi suffered the worst of her addiction in 2018 when she had an overdose after staying sober for six years. Emergency services were called to the star’s home due to an opioid overdose and she ended up spending two weeks in hospital then some time in an in-patient rehab facility. Two years later, and Demi is doing just fine…

15. She’s the Co-Owner of Her Treatment Center

This is why we love Demi – she uses her celebrity status to advocate for mental health. In 2011, the singer sought treatment for help with depression, bulimia and substance abuse at the CAST Centers. She’s now the co-owner of the CAST Centers in West Hollywood, California. Congrats, girl!

We can’t say this is a fun fact about Demi, but it’s certainly interesting – and awkward! In 2012, Demi admitted that she almost ran over Paul McCartney from The Beatles whilst parking her car. The singer took to Twitter to tell the funny story.

So…. today I was pulling into a parking space that some guys were standing in the middle of, and almost hit them….. When one of the guys

17. Demi is an Ambassador for Secret’s “Mean Stinks” Campaign

After experiencing bullying firsthand, Demi took a stand and decided to help others who were going through the same thing. In 2012, she became the new ambassador for Secret’s “Mean Stinks” campaign. This campaign encourages girls to “gang up for good” to end bullying in schools.

18. She was the Face of Americans for Marriage Equality Campaign

In 2014, Demi became the face of the human rights campaign’s re-launch of Americans for Marriage Equality. In her PSA, Demi declared, “Whether you’re LGBT or straight, your love is valid, beautiful and an incredible gift,” When speaking at Logo TV’s inaugural “Trailblazers” special, Demi revealed that her grandad had been gay and that “a lot of [her] spirit” comes from him. We applaud you for supporting the LGBT community, Demi!

The Heart Attack singer was in an on-and-off relationship with actor, Wilmer Valderrama since 2010 until 2016. Demi revealed to Cosmopolitan that she had broken up with That ’70s Show star when she had been relapsing. They got back together, but she announced in June 2016 that she had split up with Wilmer and today they remain “best friends”

20. Demi is Open About her Bisexuality

That’s right. On Chatty Man in 2015, Demi (sorta) admitted that she was bisexual. The lyrics for her single Cool for the Summer even suggested the singer was “experimenting” and in 2017, it was rumored Demi was dating DJ Lauren Abedini. Eventually, Demi came out to her parents explaining that she saw herself “ending up possibly with a woman.”

After suffering tough struggles herself, Demi has taken a stand be to a strong advocate for mental health issues. In 2017, she was proudly named a Global Citizen Ambassador. She champions for the mental health of thousands of children in Iraq and other vulnerable communities in war and conflict.

In a tell-all interview with Ashley Graham, Demi revealed that she never wears jeans! That’s right! Every since going on a journey of “body acceptance”, the singer said that she stopped wearing denim jeans simply because they don’t make her feel good – “I haven’t worn a pair of jeans in forever because I don’t like jeans. They don’t make me feel great right now. And I don’t have to fu****g wear jeans if I don’t want to”. YES GIRL!

Thought Demi was only good at singing and acting? You thought wrong. Apparently, she’s a big fan of Brazilian jiu-jitsu, which she started training for in 2016. Believe it or not, Demi also earned herself a blue belt in 2019!

Whether it’s her support for anti-bullying campaigns or her battle through personal struggles, we’re sure we’ve taught you a thing or two about the Sorry Not Sorry singer. If these facts about Demi Lovato haven’t turned you into a Lovatic yet, we don’t know what will!