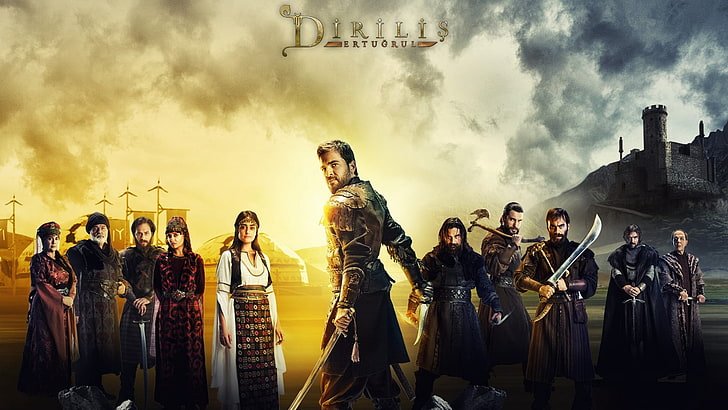 Historical tv series are on demand. “Diriliş: Ertuğrul (Resurrection: Ertugrul)” is not a new tv series, its third season is on air now. But the thing with this series is it already proved its quality and popularity.

When it is compared to “Magnificent Century”, we may say that the main difference is Magnificent Century was based on a love story, the mighty Sultan Suleiman and the political side  of Ottoman Empire was on the second plan. Whereas Diriliş: Ertuğrul is based on the historical foundation of Ottoman Empire and focused on more action scenes. This makes the series more attractive for who enjoys fighting scenes.

The third season of the series is broadcasting now. The producers say making a historical tv series and trying to keep away it from the fiction is very hard. They continiously do research and take advice from histiorians. Besides, Diriliş Ertuğrul is not a boring documentary, it is full of action. Kayı Tribe, the roots of the Ottoman Dynasty is a nomad and warrior tribe, and 13th century’s Anatolia was a battlezone.

Kayı Tribe is on of the Turkic tribes who fleed from central Asia after the Mongol Hordes began its dreadful march. Kayı Tribe’s journey through Anatolia was really hard, all the troubles of the migration plus famines and confilcts. Süleyman Şah the aged leader of the tribe has two sons as heir, Gündoğdu and Ertuğrul. But it wont be easy for Ertuğrul to be the heir, he should earn it and must be accepted by the lords of the clan.

When Kayı’s arrived to Anatolia, The Great Seljuk Empire has already collapsed and seperated to smaller Seljuk States, Mongol invasion was still ongoing, Byzantium Empire and Crusader remnats exists and also Knights of the Templar’s secret existance was a threat too.

Ertuğrul is a young man and he knew that he should lead the tribe to survive. He managed it and take this small clan to become the roots of the Ottoman Emipre. In history, he managed it, move the Kayi Clan to Bursa and his son Osman Bey declared Ottoman Beylik  which was transformed into a transcontinental empire. We can call Ertuğrul as the grandfather of the Ottomans.

Ottoman Empire was a Turkish İslamic empire, established after the collapse of Anatolian Seljuk State. Seljuk Empire reached from Central Asia to Anatolia, Ottoman’s took the step further to the gates of Vienna on west, Morocco in Africa, Egypt, Arabic peninsula and Ukraine. The success of the Ottoman Empire was the principles of their grandfather Ertuğrul and his teacher and adviser Skeikh Edebali who’s famous word is “Let live the people that the state could live” which is followed by all sultans for 600 years.

The second child of Süleiman Shah. He has the soul of a leader since his childhood. Ertuğrul is a brave and wise person, also he is a great warrior. Ertuğrul is in a pursuit of catching his dreams, and he can fight for his ideas he can face with death anytime regardless of having fear, he is also  judicious man so his followers believes to him and they can sacrifice their lifes for their young leader, Ertuğrul.

Beautiful Halime, daughter of a runaway Turkmen Prince, raised in Seljuk’s Palace. Halime is a smart, elf-sacrificing, understanding, and dignified person. She can easily solve any problems that can be faced. Future wife of Ertuğrul

Here is a gallery of Diriliş Ertuğrul (Resurrection Ertuğrul)

Diriliş Ertuğrul (Resurrection: Ertuğrul) 64th episode was aired as of today and the series in its 3rd season . According to the historical orders, we think that there will be more than 10 seasons of the series until the establishment of Ottoman Beylik which will transform to Ottoman Empire.The original series is aired on Wednesdays at 20:00 in İstanbul time on TRT 1.