Star Wars: Episode V – The Empire Strikes Back
Next Video 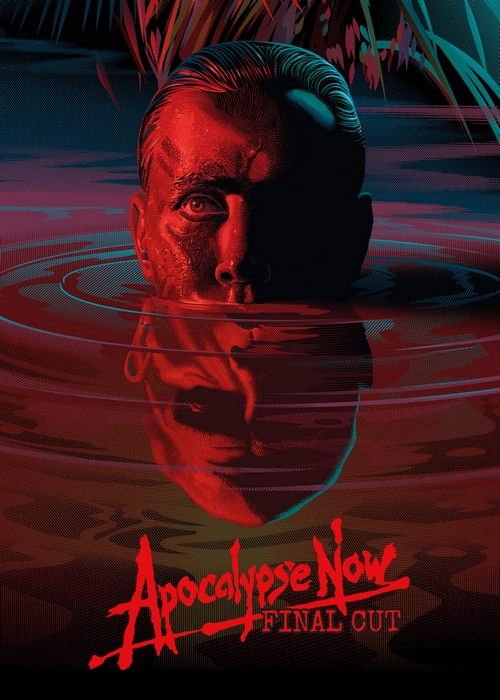 Taglines: I love the smell of napalm in the morning.

“Apocalypse Now” is the classic opus of Francis Coppola, which is rightfully considered one of the most important anti-war films of the 20th century. It tells about the times of the Vietnam War, when American soldiers arrived in Saigon, and then went to the places of military operations. And not all people managed to survive all the horror that is happening in the war. The plot focuses on special agent Benjamin L. Willard, who managed to survive several military operations at once, which seriously affected his psychological state. And in order to somehow overcome the post-traumatic syndrome and depression, he is forced to drink from morning to evening. But one day he is entrusted with a new important task.

It consists in going downstream through the jungle and finding and eliminating the colonel who once fought on the side of America, after which he flew off the coils and organized his own kingdom of violence, proclaiming himself the spiritual leader of the local population. During his journey, Benjamin will meet a variety of people and will repeatedly risk his life, trying to complete such an important task.

A U.S. Army officer serving in Vietnam is tasked with assassinating a renegade Special Forces Colonel who sees himself as a god.


This summary excludes events only seen in the Redux.

During the Vietnam War, U.S. Army 5th Special Forces soldier Colonel Walter E. Kurtz has apparently gone insane and is waging a brutal guerrilla war against terrified NVA and PLAF forces without permission, directions or resupply from his commanders. At an outpost in Cambodia, he commands American and Montagnard troops who see him as a demigod. Captain Benjamin L. Willard is summoned to I Field Force headquarters in Nha Trang, briefed on the situation by two Army commanders and a CIA officer, and ordered to “terminate Kurtz’s command… with extreme prejudice”. Willard, initially ambivalent, joins a U.S. Navy river patrol boat (PBR) commanded by Chief Petty Officer “Chief” Phillips, with crewmen Lance, “Chef”, and “Mr. Clean” to quietly navigate up the Nùng River to Kurtz’s outpost. Before reaching the coastal mouth of the Nùng, they rendezvous with the 1st Squadron, 9th Cavalry Regiment, a helicopter-borne air assault unit commanded by Lieutenant Colonel Bill Kilgore, to discuss safe passage. Kilgore is initially uncooperative as he has not received word about their mission through normal channels, but he becomes more engaged after discovering that Lance is a well-known surfer. The commander is an avid surfer himself and agrees to escort them through the Nùng’s Viet Cong-held coastal mouth. The helicopter squadron, playing “Ride of the Valkyries” on loudspeakers, raids at dawn, with Kilgore ordering a napalm strike on the Viet Cong. Before Kilgore can lure Lance out to surf on the newly conquered beach, Willard gathers the sailors to the PBR to continue their mission.

Tension arises as Willard believes himself in command of the PBR while Chief prioritizes routine patrol objectives over Willard’s. Slowly making their way upriver, Willard partially reveals his mission to the Chief to assuage his concerns about why his mission should proceed. As Willard studies Kurtz’s dossier, he is struck by the mid-career sacrifice he made by leaving a prestigious Pentagon assignment to join the Special Forces, which afforded no prospect of advancing in rank past Colonel. The third-generation West Point graduate could have pursued more conventional command assignments to eventually rise to four-star general.

Weeks later, the PBR reaches the remote U.S. Army outpost by the Do Lung Bridge. Willard and Lance enter the outpost after nightfall, seeking information on what is upriver and receive a dispatch bag containing official and personal mail. Unable to find any commanding officer at Do Lung, Willard orders the Chief to continue as an unseen enemy assaults the bridge. Willard learns via the dispatch that another MACV-SOG operative, Special Forces Captain Richard Colby, was sent on an earlier mission identical to Willard’s and has since joined Kurtz.[a]

As the crew read letters from home, Lance activates a smoke grenade while under the influence of LSD, attracting the attention of an unseen enemy, and Mr. Clean is killed. Further upriver, Chief is impaled by a spear thrown by Montagnards and attempts to kill Willard by impaling him on the spear point protruding from his own chest. Willard suffocates Chief and Lance buries him in the river. Willard reveals his mission to Chef, who is now in charge of the PBR. Chef is angered by the mission, but he insists that they complete it together.

The PBR arrives at Kurtz’s outpost, located on the site of a long abandoned Angkor Empire temple compound, teeming with Montagnards and strewn with corpses and severed heads. Willard, Chef and Lance are greeted by an American freelance photojournalist, who manically praises Kurtz’s genius. As they wander through, they come across a near-catatonic Colby, along with other US servicemen now in Kurtz’s renegade army. Willard returns to the moored PBR to leave Chef with the boat, ordering him to call in a pre-arranged airstrike on the outpost if Willard and Lance do not return.

In the camp, Willard is subdued, bound and brought before Kurtz in a darkened temple. Willard is detained for several days, during which time Kurtz kills Chef, preventing the airstrike from occurring. Willard is soon released and allowed to roam the compound. Kurtz lectures him on his theories of war, the human condition and civilization, while praising the ruthlessness and dedication of his adversaries, the Viet Cong. Kurtz discusses his family and asks that Willard tell his son about him after his death.

That night, as the Montagnards ceremonially slaughter a water buffalo, Willard stealthily enters Kurtz’s chamber as he is making a voice recording and attacks him with a machete. Mortally wounded, Kurtz utters “… The horror … the horror …” and dies. All in the compound see Willard departing, carrying a collection of Kurtz’s writings, and bow down to him. Willard then leads Lance to the boat and they sail away.

Ayla: The Daughter of War