War with Grandpa
Next Video 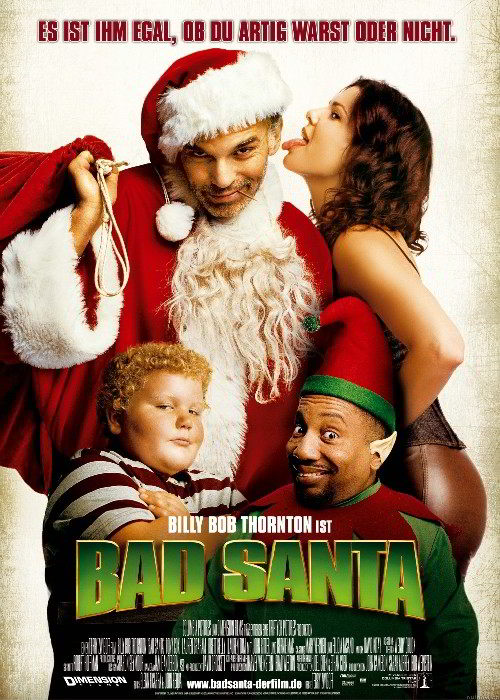 Everyone is used to the fact that Santa Claus is a good-natured old man who gives children joy and happiness. However, the main character of this film, Willie, is a rare exception to the rule. Unlike other people who dress up in Santa costume before Christmas, he leads a completely antisocial lifestyle that can shock ordinary people. The fact is that Willie is an experienced thief who, year after year, carries out the same scheme, which he implements with the help of his partner. They dress up in Christmas outfits and then go to work at the local department store. And with the onset of the holiday night, they encircle this department store, thanks to which they get the opportunity to live a carefree life for the next year.

Despite the fact that Willie is already over forty, he has not acquired any purpose in his life. All days he gets drunk to unconsciousness, spends his free time in the company of prostitutes and is rude to the people around him. And this behavior seems quite normal to the protagonist. But this time Willie will have to face events that will force him to reconsider his life.

A miserable conman and his partner pose as Santa and his Little Helper to rob department stores on Christmas Eve. But they run into problems when the conman befriends a troubled kid.


Willie T. Soke (Billy Bob Thornton) and his dwarf assistant Marcus Skidmore (Tony Cox) are professional thieves. Every year, Willie gets a job as a department store Santa Claus and Marcus as an elf to rob shopping malls at night, with Marcus’ wife Lois (Lauren Tom) as their getaway driver. Marcus takes his elf duties seriously, but Willie, a sex-addicted alcoholic, is gradually unable to perform with children, also affecting his safe-cracking abilities, much to Marcus’s displeasure. When they are hired at the Saguaro Square Mall in Phoenix, Willie’s vulgarity shocks the prudish mall manager Bob Chipeska (John Ritter), who brings them to the attention of security chief Gin Slagel (Bernie Mac).

At the mall, Willie is visited by Thurman Merman (Brett Kelly), a friendly but exceedingly gullible, dimwitted overweight young boy who assumes Willie is really Santa, and is constantly bullied by a teenage gang of skateboarders. At a bar, Willie meets Sue (Lauren Graham), a woman with a Santa Claus fetish, and they begin a sexual relationship. After some casual sex with Sue in Willie’s beaten-up Impala SS, Willie is harassed and attacked by a Hindustani hoodlum, but Thurman intervenes. Willie gives Thurman a ride home, where he lives with his senile grandmother (Cloris Leachman). Thurman reveals that his mother died and his father, Roger, is “exploring mountains”—actually in jail for embezzlement. Willie tricks Thurman into letting him rob the house safe and steal Roger’s BMW 740iL (E38).

Bob informs Gin that he overheard Willie having sex in a dressing room and Gin starts to investigate. Willie sees his motel room being raided, and moves in to Thurman’s house, much to Thurman’s delight. Marcus is angry at Willie for taking advantage of Thurman, and states his disapproval of Willie’s sex addiction when Willie makes a rude remark about Thurman’s grandmother.

Gin visits Roger, who indirectly reveals that Willie is staying with Thurman illegally. Gin confronts Willie and Marcus at the mall, and takes them to a bar. There, he reveals that he has figured out their plan, and blackmails them for half the score to keep silent. Willie and Marcus’ partnership begins to falter, further exacerbated when Willie shows up to work drunk and destroys the Santa attraction, to Marcus’ and Gin’s shock.

Willie attempts suicide by inhaling vehicle exhaust fumes. He gives Thurman a letter to give to the police, confessing his misdeeds and the heist planned for Christmas Eve. Willie notices Thurman’s black eye, and abandons the suicide attempt to confront the skateboarders; he assaults their leader, intimidating them into leaving Thurman alone.

Furious at Gin’s blackmail, Marcus and Lois set a trap for him. Feigning the need to jump start their vehicle, Lois hits Gin with the car, and Marcus kills him via electrocution. Willie and Thurman prepare for the approaching holiday with help from Sue. On Christmas Eve, Willie, Marcus, and Lois burglarize the mall. Although some technical difficulties arise, Willie is successfully able to crack the safe. Meanwhile, he also gets a pink stuffed elephant that Thurman had wanted for Christmas. However, Marcus reveals to Willie that he intends to kill him, fed up with his increasing carelessness. As Marcus is about to execute Willie, the police unexpectedly swarm in, tipped off by the letter Willie gave Thurman. A fire fight ensues between Marcus and the cops while Willie flees. Determined to give Thurman his present, he leads the police on a chase to Thurman’s house, ignoring their orders to freeze. He is shot repeatedly on Thurman’s porch, but survives.

The epilogue is told through a letter from Willie, recovering in the hospital. He expresses his gratitude to Thurman, and reveals that he was cleared of the robbery—the shooting of an unarmed Santa embarrassed the police—and will be working for the police as a sensitivity counselor. Sue is granted guardianship over Thurman and his house until his father’s release. Marcus and Lois are in prison; Willie ends the letter by hoping that Roger will avoid them and telling Thurman that he should be out of the hospital soon and to be ready for his return. When the lead skateboard bully harasses Thurman again, Thurman finally stands up to him by kicking him hard in the crotch and riding away on his bike giving the finger to the downed bully.