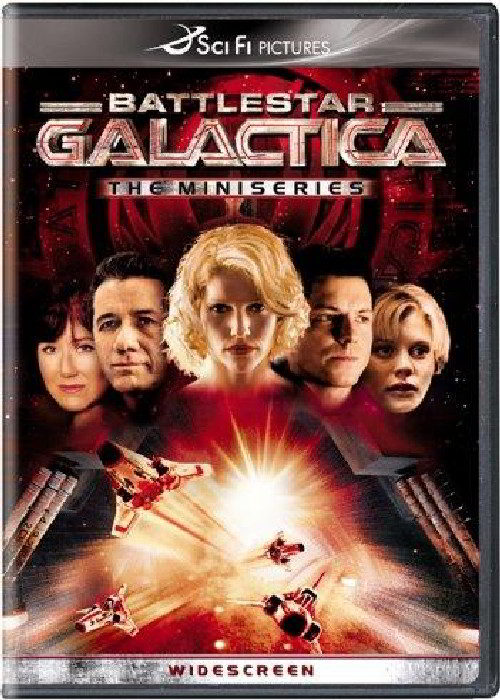 The Galactica has gone to an armory to re-equip the ship and encounter one of the new types of Cylons, human-like and very powerful. They have been joined by Laura Roslin, the former Secretary of Education who has been sworn in as President of the 12 Colonies. She too has much on her mind besides the attack having learned that day that she has cancer. She tells Commander Adama and his senior officers that the war has been lost and their job now is one of survival. Gaius Baltar meanwhile can communicate with Number 6, the human-like Cylon, who is in his mind. She tells him that she cannot be killed as her consciousness will simply be transferred to another body, identical to the one she has now. She also tells him that there are twelve others like her, human in almost all respects. She also tells him that there are sleeper agents on the Galactica who may not even know they are Cylons. With paranoia and fear setting in, Adama tells the crew that they will set off for the fable 13th Colony – Earth. There is a high price to pay for getting away however.


The Cylons locate the human civilian fleet, and Roslin is forced to make the decision to order all of the ships capable of faster-than-light (FTL) travel to jump immediately to escape. Unfortunately this means abandoning many of the survivors who are aboard ships without FTL technology, and as Roslin and the FTL ships jump away, the Cylons launch an attack on the remaining ships.

At the Ragnar Anchorage space station, Adama is attacked by a supposed arms dealer who claims to be simply bootlegging supplies, but who is clearly being affected by the radiation cloud surrounding Ragnar, which humans are immune to. Adama deduces that he is facing a new type of Cylon that looks, sounds, and acts human.

As the civilian fleet joins the Galactica at Ragnar, President Roslin appoints Dr. Baltar, who has not disclosed his suborning by the Cylons, as one of her scientific advisers to combat the Cylons. Number Six reveals herself to Baltar in hallucinatory form while attempting to direct his behavior. She suggests that she may have planted a microchip inside Baltar’s brain while he slept, allowing her to transmit her image into his conscious mind. Responding to one of her suggestions, he is compelled to identify Aaron Doral, a public relations specialist, as a Cylon agent masquerading as a human. Despite his protests and the lack of any evidence to support the accusation, Doral is left at Ragnar when the Galactica departs.

As the Cylons blockade Ragnar, the Galactica and its fleet of Vipers engage the Cylon fleet in order to allow the civilian fleet to escape by “jumping” to a distant, unexplored area outside of their star system. The Galactica and the colonial fleet make good their escape. Adama then attempts to lift the morale of the surviving humans by announcing plans to reach a legendary thirteenth colony called “Earth”, whose existence and location have been closely guarded military secrets. Roslin is skeptical and later confronts Adama and makes him admit that Earth is simply an ancient myth.

Returning to his quarters, Adama finds an anonymous note has been left for him stating “There are only 12 Cylon models.” On Ragnar, Doral clearly appears to be suffering from radiation poisoning that has been shown to affect only Cylons. His identity as a Cylon is confirmed when a group of Cylons, including the metallic Cylon Centurions and several humanoid Cylons consisting of multiple copies of the Number Six, Doral, and Ragnar arms-dealer models, come to retrieve Doral. In a twist ending, one of the group appears to be Boomer, indicating that her counterpart on the Galactica is a Cylon as well.