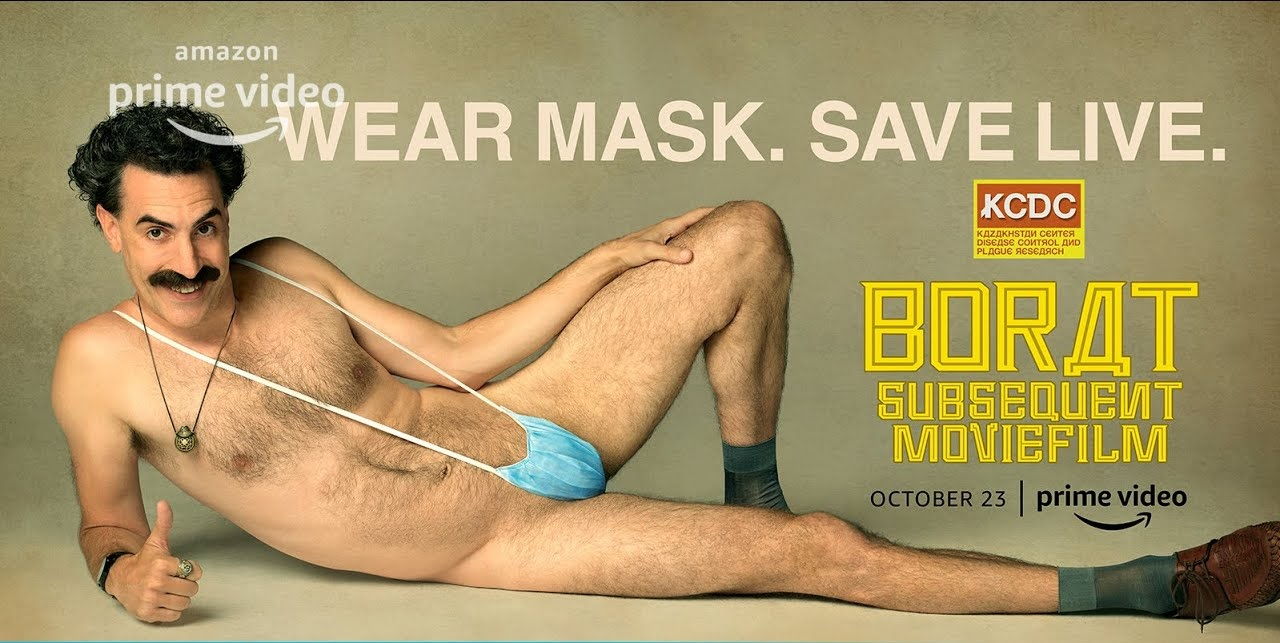 Based on Borat Sagdiyev by Sacha Baron Cohen..

Follow-up film to the 2006 comedy centering on the real-life adventures of a fictional Kazakh television journalist named Borat.

14 years after making a film about his journey across the USA, Borat risks life and limb when he returns to the United States with his young daughter, and reveals more about the culture, the COVID-19 pandemic, and the political elections.


Borat humiliates Kazakhstan, causing journalist Borat Sagdiyev to be imprisoned in a gulag for life. Fourteen years later, the country’s Premier Nursultan Nazarbayev releases him, with a mission to deliver Kazakh Minister of Culture Johnny the Monkey to President Donald Trump in an attempt to redeem the nation. Unable to get close to Trump after defecating in the landscaping of Trump International Hotel and Tower in the previous film, Borat opts to give the monkey to Vice President Mike Pence. Before he leaves, he discovers his arch nemesis neighbor has stolen his family and home, and that he has a fifteen-year-old daughter, Tutar, who lives in his barn.

Borat is transported across the world in a circuitous route by cargo ship and arrives in Texas, where he finds he is a celebrity. Wanting to maintain a low profile, Borat purchases multiple disguises. He buys a cell phone and goes to welcome Johnny, but finds that Tutar is in Johnny’s shipping crate and has eaten him. Horrified, Borat faxes Nazarbayev, who tells him to find a way to satisfy Pence or he will be executed. Borat decides to give Tutar to Pence.

Tutar receives a makeover and Borat introduces her at a debutante ball. At the ball, her menstrual blood is prominently displayed during a father and daughter dance. Discovering that Pence is nearby at CPAC, Borat disguises himself as Trump and attempts to give Tutar to him there, but is ejected by security. Nazarbayev tells him to return to Kazakhstan for execution. Realizing that he can still give Tutar to someone close to Trump, Tutar suggests to give her to Rudy Giuliani.

Shaken, Borat decides to commit suicide by going to the nearest synagogue while dressing like his version of a stereotypical Jew, but is shocked to find Holocaust survivors there who treat him with kindness, and to his anti-Semitic delight, reassure him that the Holocaust happened. Overjoyed, Borat goes looking for Tutar, but finds the streets deserted due to the COVID-19 pandemic. He quarantines with two men in the wilderness and starts to search for his daughter online. Horrified, Borat sees that Tutar has become a successful reporter, and will be covering a March for Our Rights rally in Olympia, Washington.

At the rally, he finds Tutar and tells her he will be killed if he does not give her to Giuliani. She accepts and arranges an interview to seduce Giuliani, but without her father’s participation. Borat talks with her babysitter and has a change of heart, realizing that he loves Tutar. After the interview, Giuliani and Tutar proceed to a bedroom before Borat intervenes and tries to personally offer sexual favors to Giuliani. Borat decides to face execution in Kazakhstan and Tutar promises to go with him.

Borat is shocked to find he will not be executed as he had instead been used as retaliation by Nazarbayev for making Kazakhstan a laughingstock. Before departing for the United States, Kazakhstan officials infected Borat with SARS-CoV-2 via an injection of “gypsy tears”, making him patient zero of the COVID-19 pandemic. As he was sent around the world, he continued to spread the virus. Borat records Nazarbayev’s admission and sends it to the man who sold him his phone.

Borat and Tutar blackmail Nazarbayev into giving him his job back and changing Kazakhstan’s misogynistic laws. Three months later, Tutar and Borat are a reporting team and Kazakhstan has a new tradition to replace the nation’s antisemitic ones: the Running of the American. It features exaggerated versions of Trump supporters pretending to spread COVID-19 and kill an effigy of Anthony Fauci.