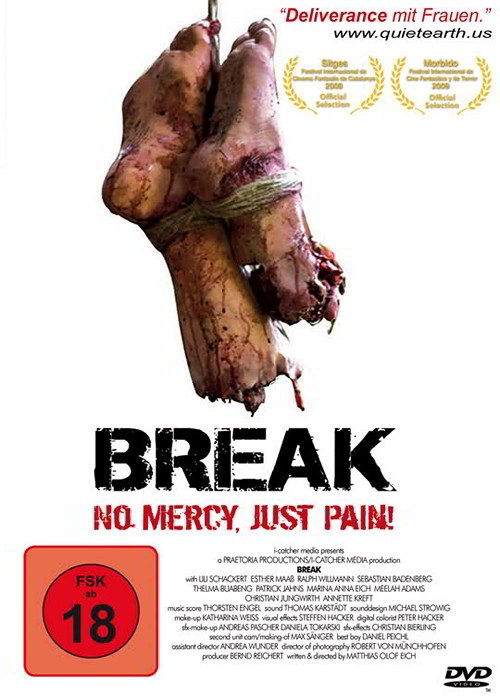 The sudden break in the relationship with her boyfriend leaves Sarah Carter devastated. So her 3 friends Rose, Clare and Anna decide to cheer her up by taking her on a trip in the Canadian woods. While on their way to the secluded lake where the four want to spend the weekend, they meet charming hiker Eric, who nearly immediately falls for Clare’s sparkling personality. Still, it’s a girl-only weekend and the young women can’t wait to go skinny dipping. The beautiful lake, warm summer weather and some cool beer soon have the group forgetting about their big city problems – until Anna trips over a pile of intestines. And right beside it the terrified girls find a pair of hacked-off human feet dangling from a tree. The moment they realize that humans have become the preferred prey in this area, the two rednecks responsible for those gruesome killings start to hunt them down with bow and arrows. When Clare suffers a nearly fatal shot in the head, and Anna and Rose get captured by the sadistic duo, it is Sarah, who must find a way to get help. But the inbreed Phillip is hard on her heels. And he knows the territory very well.