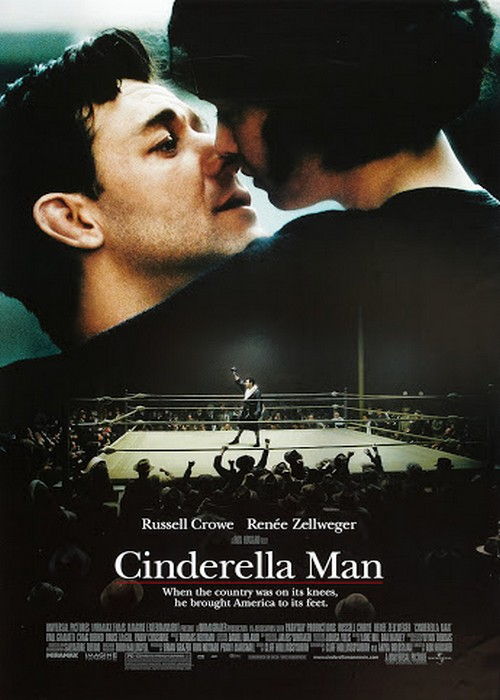 Taglines: When America was on its knees, he brought us to our feet.

The story of James J. Braddock, a supposedly washed-up boxer who came back to become a champion and an inspiration in the 1930s.

The sports drama “Cinderella Man” tells the story of a promising athlete who tried his best to become a champion. He had all the makings in order to achieve the desired. But the offensive series of failures put a fat cross on his career. And now the main character of the film is left without constant earnings, despite the fact that he has a wife and young children who need food. The boxer is trying hard to find at least some work. But all attempts result in failure in view of that. that the country began a great depression. People were starving, living in poverty and could not find work. And every month the situation became more and more tense.

Gradually, the state of the protagonist became increasingly deplorable. And if it were not for a fluke, he would hardly have been able to get out of this situation. He is again given a chance to enter the ring, as the main fighter was injured. Despite the fact that the battle was to be one-time, the success of the protagonist was so shocking that many began to think about his full return. But for this, the man will again have to go through a series of troubles.


James J. Braddock is an Irish-American boxer from New Jersey, formerly a light heavyweight contender, who is forced to give up boxing after breaking his hand in the ring. This is both a relief and a burden to his wife, Mae. She cannot bring herself to watch the violence of his chosen profession, yet she knows they will not have enough income without his boxing.

As the United States enters the Great Depression, Braddock does manual labor as a longshoreman to support his family, even with his injured hand. Unfortunately, he cannot get work every day. Thanks to a last-minute cancellation by another boxer, Braddock’s longtime manager and friend, Joe Gould, offers him a chance to fill in for just one night and earn cash. The fight is against the number-two contender in the world, Corn Griffin.

Braddock stuns the boxing experts and fans with a third-round knockout of his formidable opponent. He believes that while his right hand was broken, he became more proficient with his left hand, improving his in-ring ability. Despite Mae’s objections, Braddock takes up Gould’s offer to return to the ring. Mae resents this attempt by Gould to profit from her husband’s dangerous livelihood, until she discovers that Gould and his wife also have been devastated by hard times.

With a shot at the heavyweight championship held by Max Baer a possibility, Braddock continues to win. Out of a sense of pride, he uses a portion of his prize money to pay back money to the government given to him while unemployed. When his rags to riches story gets out, the sportswriter Damon Runyon dubs him “The Cinderella Man”, and before long Braddock comes to represent the hopes and aspirations of the American public struggling with the Depression.

After wins against John Henry Lewis and Art Lasky, a title fight against Baer comes his way. Braddock is a 10-to-1 underdog. Mae is terrified because Baer, the champ, is (as portrayed in this highly fictionalized characterization) a vicious man who reportedly has killed at least two men in the ring. He is so destructive that the fight’s promoter, James Johnston, forces both Braddock and Gould to watch a film of Baer in action, just so he can maintain later that he warned them what Braddock was up against.

Braddock demonstrates no fear. The arrogant Baer attempts to intimidate him, even taunting Mae in public that her man might not survive. When he says this, she becomes so angry that she throws a drink at him. She is unable to attend the fight at the Madison Square Garden Bowl or even to listen to it on the radio.

On June 13, 1935, in one of the greatest upsets in boxing history, Braddock defeats the seemingly invincible Baer to become the heavyweight champion of the world.

An epilogue reveals that Braddock would lose his title to Joe Louis and later worked on the building of the Verrazano Bridge, owning and operating heavy machinery on the docks where he worked during the Depression, and that he and Mae used his boxing income to buy a house, where they spent the rest of their lives.