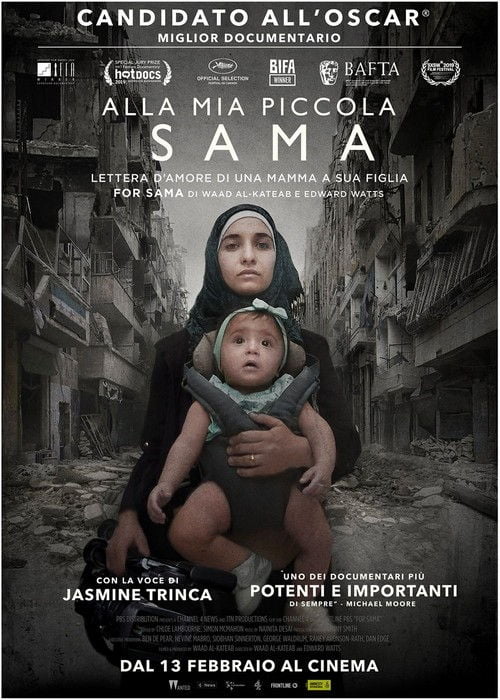 FOR SAMA is both an intimate and epic journey into the female experience of war.

This is a documentary that shows the life of a woman named Waad Al-Kateab. This film shows its viewers at the same time an intimate as well as a slightly epic journey that took place with women during the war. Here we are talking about one letter that the mother wrote with all her love to her daughter. The letter refers to the life of our main character, she lived in Syria in the city of Aleppo, it describes five years of the uprising that took place in this city.

It describes the story of how she falls in love with a man, eventually she marries him, and she gives birth to a little daughter, whom she called herself, and all this time, when a catastrophic strong conflict occurs, around the main character. And now, in her letter, the woman describes the most incredible and at the same time gloomy stories from her life, about various losses, as well as about laughter, and how she survived in this city. It was very difficult for her, and a lot of different problems fell on her shoulders, which are very difficult to solve. And now the woman faces a difficult choice of what to do next to escape from the city, or to stay here. What is the fate of the main character?

FOR SAMA is both an intimate and epic journey into the female experience of war. A love letter from a young mother to her daughter, the film tells the story of Waad al-Kateab’s life through five years of the uprising in Aleppo, Syria as she falls in love, gets married and gives birth to Sama, all while cataclysmic conflict rises around her. Her camera captures incredible stories of loss, laughter and survival as Waad wrestles with an impossible choice – whether or not to flee the city to protect her daughter’s life, when leaving means abandoning the struggle for freedom for which she has already sacrificed so much. The film is the first feature documentary by Emmy award-winning filmmakers Waad al-Kateab and Edward Watts.