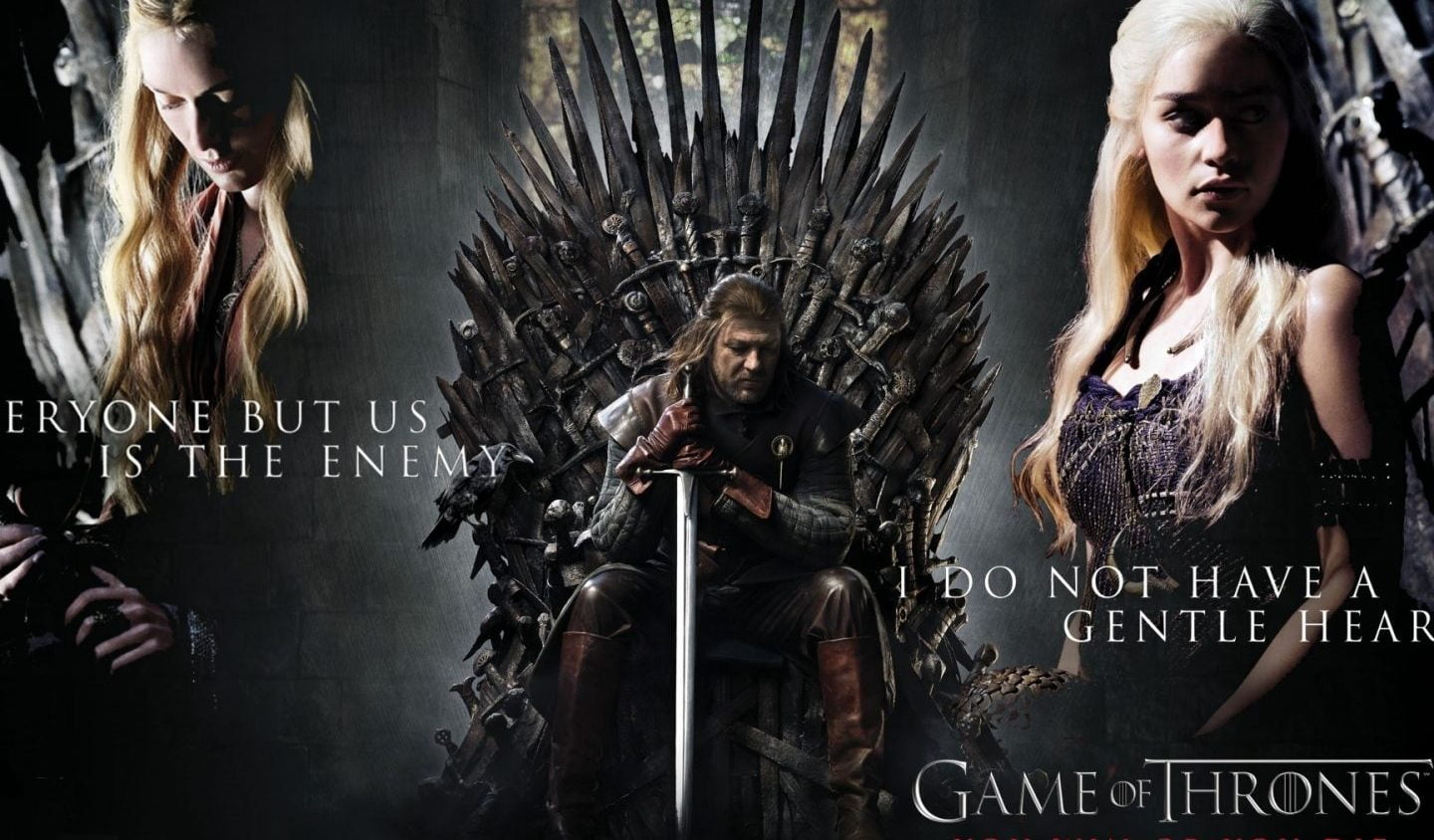 Series Premiere. Eddard Stark is torn between his family and an old friend when asked to serve at the side of King Robert Baratheon; Viserys plans to wed his sister to a nomadic warlord in exchange for an army. Lord Ned Stark is troubled by disturbing reports from a Night’s Watch deserter. King Robert and the Lannisters arrive at Winterfel. The exiled Viserys Targaryen forges a powerful new allegiance.

At the castle Winterfell, Lord Ned Stark begins to believe that something is amiss. A deserter from the Night Watch, the guardians of the giant ice wall at the northern boundary of their territory, says he’s seen the white walkers. Later, Ned and his sons find animals slain in the woods, including a she-wolf whose six pups they keep, one for each of Ned’s children. They also welcome the arrival of Ned’s good friend King Robert who was once betrothed to Ned’s sister. She was killed before they could marry and he wed Cersei Lannister who has given him a son, Joffrey. Along with them are Cersei’s two brothers, the handsome Jaime and Tyrion, a dwarf with very large appetites. The King wants Ned to return with him to his capital, King’s Landing, and become the King’s Hand. Ned accepts but his young son Bran accidentally sees something he should not have and suffers a serious fall as a result. Meanwhile, in the land across the narrow sea, Viserys Targaryen needs an army to attack King’s …


Three men of the Night’s Watch ride out beyond the Wall after receiving reports that lawless tribes of wildings have been sighted near the border. Will, a slight ranger, verifies this information when he finds the dismembered corpses of the group’s men, women and children scattered in a frozen glade. He carries the news back to his comrades, Gared and Ser Waymar Royce, but before they can investigate further, the bodies disappear. As Will searches the area, the forest fills with Royce’s screams and the gallop of the group’s bolting horses. Will races through the trees and comes face to face with Gared – moments before a shadowy creature with glowing blue eyes severs his friend’s head and tosses it at Will’s feet.

In the courtyard of Winterfell, young Bran Stark struggles with archery practice as his family looks on. His tomboy sister, Arya Stark, abandons her training in needlework to fire a shot over Bran’s shoulder with her own bow, skewering the target’s center and sending the Starks into laughter. Their mirth is cut short, however, by news from Ser Rodrick Cassel, the house’s Master at Arms: “The guards rode in from the hills. They’ve captured a deserter from Night’s Watch.” Lord Ned Stark knows immediately what he must do, and orders his boys to saddle their horses.

On a hillside outside the castle walls, the ranger Will stands before Ned, understanding that his sentence is death but swearing that he saw White Walkers. Ned draws his family’s ancient blade, called Ice, and metes out the punishment as his sons – even young Bran – look on. Afterward, he tells his the boy: “Our way is the old way. The man who passes the sentence should swing the sword.” When Bran asks his father if the deserter really saw the White Walkers, Ned assures him that they’ve been gone for thousands of years.

On their return to Winterfell, the party comes across a dead direwolf – a monstrous creature rarely seen south of the Wall. The wolf birthed a litter of pups before her death, and Jon Snow, bastard son to Ned, convinces his father that it’s an omen: The direwolf is the sigil of House Stark, and Ned’s five true-born children are meant to have the pups. As they walk away, Jon spies an albino runt cast to the side and takes it for himself.

In the throne room at King’s Landing, Ser Jaime Lannister and his twin sister Queen Cersei Baratheon look on as the Silent Sisters perform death rights over the body of John Arryn, the Hand of the King. Cersei worries that Arryn may have shared some unmentionable secret before his death, but Jaime is not concerned and notes that King Robert will find a replacement for Arryn soon enough. Not that serving as Hand is a job anyone should want – as Jaime puts it: “Their days are too long, and their lives are too short.”

A message arrives at Winterfell saying that John Arryn is dead and King Robert is paying a visit. Ned knows this can mean only one thing – that Robert plans to ask him to serve as the new Hand. The house is thrown into preparation, and when the king arrives he greets his old friend with a bear hug and immediately asks to visit the crypts of Winterfell. By the tomb of Lyanna Stark, who was betrothed to Robert before her death, Robert poses the offer he rode so far to deliver. “You helped me win the Iron Throne,” he says. “Now help me keep the damn thing. I have a son. You have a daughter. We’ll join our houses.” Ned withholds his answer … but knows he can’t refuse.

The Stark family throws a feast in Robert’s honor, which the king thoroughly enjoys by getting raucously drunk and burying his face in the breasts of a serving wench. The Queen looks on, unamused, as she tells Lady Catelyn Stark that her daughter, Sansa Stark, will make a natural fit with the nobles in the capital.

Jon Snow, on the other hand, is seated far from the royal table so as not to insult the queen with his low birth. He steps outside to talk with his uncle, Benjen Stark, who is a ranger in the Night’s Watch. Jon begs Benjen to take him to the Wall when he returns, but his uncle knows that Jon is too young to make such a weighty decision. Benjen walks off, and Tyrion Lannister – the dwarf brother of Jaime and Cersei – steps out of the darkness and asks, “You’re Ned Stark’s bastard?” Jon takes offense, but Tyrion advises him to remember who he is and it can never be used to hurt him. “All dwarves are bastards in their fathers’ eyes,” he tells Jon.

Inside, Benjen tells Ned that he’s also heard reports of White Walkers, which must be untrue but even as a madman’s raving is unwelcome. Ned nods, discomforted by the news as well as the feast echoing through his home, responds with the family’s stoic words: “Winter is coming.” On his way through the great hall, Ned crosses paths with Jaime Lannister, who says he looks forward to Ned’s arrival in King’s Landing to serve as Hand. Perhaps if Robert throws a tournament to celebrate, they could spar against each other, Jaime suggests. “I don’t fight in tournaments,” Ned replies. “Because when I fight a man for real, I don’t want him to know what I can do.”

Far to the southeast of Winterfell, on the continent of Essos across the Narrow Sea, a young silver-haired man, Viserys Targaryen, prepares his sister Daenerys to meet a possible husband. As the last heir in his line – a storied family of kings who Robert nearly wiped out when usurping the Iron Throne – Viserys hopes to wed his sister to a Dothraki horselord named Khal Drogo as a means of securing the khal’s massive army to help reclaim rule over Westeros. Callow and mean-spirited, he keeps Daenerys in line by warning her not to “wake the dragon.”

With the help of Magister Illyrio Mopatis, a wealthy merchant who recognizes the opportunity in befriending a deposed king, the Targaryens meet Drogo, who wordlessly assesses Daenerys and then turns his horse and leaves. When Viserys asks whether the khal liked his sister, Illyrio replies: “If he didn’t like her, we’d know.”

Their wedding is performed in traditional Dothraki style, meaning that the crowd participates in wanton sex and murder. As a gift, Daenarys receives a chest of priceless dragon eggs from Illyrio, and an exiled Westerosi knight named Ser Jorah Mormont gives her books containing the history of her homeland. After the wedding, Daenerys weeps as Khal Drogo deflowers her – not gently – on a cliff above sea.

After the feast, Ned and Catelyn rest in bed when Maester Luwin arrives with a missive from Catelyn’s sister Lysa, the widow of Jon Arryn. The message says that Arryn was murdered by the Lannisters and that the king is in danger. Catelyn begs her husband not go south to King’s Landing, but he knows he has no other option. The next morning, after he accepts Roberts offer, the king thanks him and says he knows the sacrifice Ned is making – but there’s no other man he can trust.

Ned leaves for a hunt with Robert and his retinue, waving goodbye to his son, Bran. The young Stark spends the afternoon climbing the rocky walls of Winterfell, one of his favorite hobbies. At the pinnacle of an abandoned tower, he hears strange noises, and when he looks inside a window, he sees Jaime Lannister and his twin sister, Queen Cersei, having sex on the floor. Cersei notices Bran and screams. Jaime steps to the window frame and grabs the boy, holding him firmly. He looks to his sister and then to the ground before sending Bran plummeting to the rocky ground below.