Nausicaä of the Valley of the Wind
Next Video 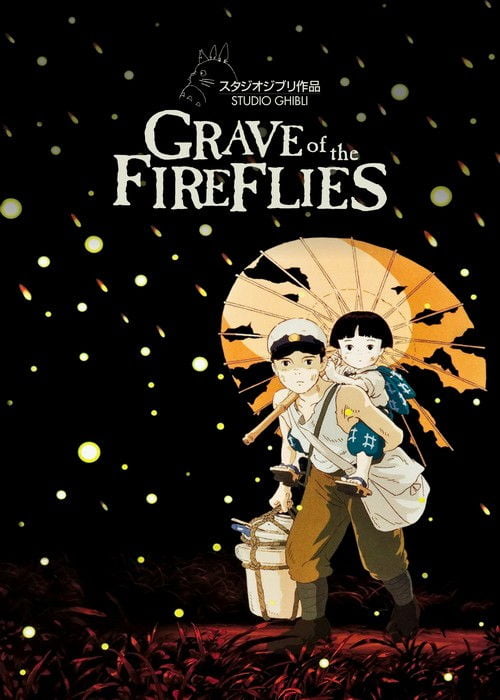 A young boy and his little sister struggle to survive in Japan during World War II.

The story of Seita and Setsuko, two young Japanese siblings, living in the declining days of World War II. When an American firebombing separates the two children from their parents, the two siblings must rely completely on one another while they struggle to fight for their survival.

Seita lives with her younger sister Setsuko and her mother in the town of Kobe in Japan. The father of the guys went to serve in the war, he is in the fleet of the emperor. During the bombing, Sait’s mother died. The father is not able to help the children, as he is at sea. The children have no choice but to ask for help from the aunt who sheltered them in her home. A woman is not happy with such a relationship, and their stay in her house is very painful for her nervous state. Seta decides to leave his relative’s house to start living separately. The guys expect that they will be able to establish their own life on their own.

Having found themselves on one of the banks of the river, brother and sister found an abandoned refuge that became their home. The elder brother took over the responsibilities of Setsuko’s custody. When the shelling began, he did not want the girl to worry, and therefore told her sister that this was only fire from fireflies. Little children learned from their own experience what war is, what hardships it brings for itself and how to act in order to stay alive. Will they be able to wait until the war is over and father will return home?

Based on Grave of the Fireflies by Akiyuki Nosaka


On 21 September 1945, shortly after the end of World War II, a teenage boy, Seita, dies of starvation in a Kobe train station. A janitor sorts through his possessions and finds a candy tin, which he throws into a field. The burnt remains of several small bones spill out, and the spirit of Seita’s younger sister, Setsuko, springs from the tin and is joined by Seita’s spirit and a cloud of fireflies. They board a train.

Months earlier, Seita and Setsuko’s house is destroyed in a firebombing along with most of Kobe. They escape unharmed, but their mother dies from severe burns. Seita and Setsuko move in with a distant aunt, who convinces Seita to sell his mother’s silk kimonos for rice. Seita retrieves supplies he buried before the bombing and gives everything to his aunt, save for a tin of Sakuma drops. As rations shrink and the number of refugees in the house grows, the aunt becomes resentful of the children, saying they do nothing to earn the food she prepares.

Seita and Setsuko leave the aunt’s home and move into an abandoned bomb shelter. They release fireflies into the shelter for light. The next day, Setsuko is horrified to find that the insects have died. She buries them in a grave, asking why they and her mother had to die. As they run out of rice, Seita steals from farmers and loots homes during air raids, for which he is beaten. When Setsuko falls ill, Seita takes her to a doctor, who explains that she is suffering from malnutrition.

Desperate, Seita withdraws all the money in their mother’s bank account. As he leaves the bank, he becomes distraught when he learns that Japan has surrendered. He also learns that his father, a captain in the Imperial Japanese Navy, is most likely dead, as most of Japan’s navy has been sunk.

Seita returns to the shelter with food, but finds Setsuko hallucinating. Seita hurries to feed her, but she dies as he finishes preparing the food. Seita cremates Setsuko’s body and her stuffed doll in a straw casket. He carries her ashes in the candy tin along with his father’s photograph.

Seita and Setsuko’s deceased spirits arrive at their destination, healthy and happy. Surrounded by fireflies, they rest on a hilltop bench overlooking present-day Kobe.