The Wizard of Oz
Next Video 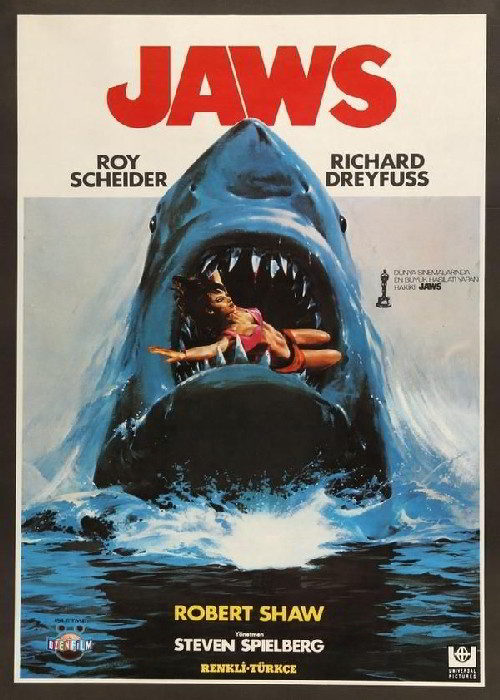 Taglines: There is a Great White Man-Eating Shark hanging around these parts.

The movie takes place over five days – on the Amity Island, where a small resort town is located. In this quiet and sunny place terrible tragic events took place, which began in the early morning, when the local police chief Martin Brody and his assistant find the remains of the girl’s body on the shore. She was the first victim of a huge white shark that appeared off the coast of Amity …
Every day the number of victims of a bloodthirsty shark continues to increase. Can a brave shark hunter, a veteran of World War II, a fisherman Quint on his ship, catch and kill a cannibal shark? Martin Brody and Matt Hooper, an expert from the National Oceanography Institute, who arrived on the island, set off on a dangerous sea expedition with him.

When a killer shark unleashes chaos on a beach community, it’s up to a local sheriff, a marine biologist, and an old seafarer to hunt the beast down.

Based on Jaws by Peter Benchley

Also Known As: Stillness in the Water

During a beach party at dusk on Amity Island, a young woman, Chrissie Watkins, goes skinny dipping in the ocean. While treading water, she is violently pulled under. The next day, her partial remains are found on shore. The medical examiner’s ruling that the death was due to a shark attack leads police chief Martin Brody to close the beaches. Mayor Larry Vaughn overrules him, fearing that the town’s summer economy will be ruined and points out that the town has never had trouble with sharks. The coroner now concurs with the mayor’s theory that Chrissie was killed in a boating accident. Brody reluctantly accepts their conclusion until the shark kills both a pet dog and a young boy, Alex Kintner, in full daylight on a crowded beach. A bounty is placed on the shark, prompting an amateur shark-hunting frenzy. Local professional shark hunter Quint offers his services for $10,000. Meanwhile, consulting oceanographer Matt Hooper examines Chrissie’s remains, and confirms her death was caused by a shark—an unusually large one.

When local fishermen catch a tiger shark, the mayor proclaims that the beach is safe. Mrs. Kintner, Alex’s mother, openly blames Brody for her son’s death; leaving him guilt-ridden. Hooper disputes that it is the same predator, confirming this after no human remains are found inside it. Hooper and Brody find a half-sunken vessel while searching the night waters in Hooper’s boat. Underwater, Hooper retrieves a sizable great white shark’s tooth embedded in the submerged hull. He drops it in fright after encountering the partial corpse of local fisherman Ben Gardner. Vaughn discounts Brody and Hooper’s statements that a huge great white shark is responsible for the deaths, and refuses to close the beaches, allowing only added safety precautions. On the Fourth of July weekend, tourists pack the beaches. Following a juvenile prank in which the presence of a shark is simulated, the real shark enters a nearby estuary, killing a boater and causing Brody’s oldest son, Michael, to go into shock. Brody then convinces Vaughn to hire Quint.

Quint, Brody, and Hooper set out on Quint’s boat, the Orca, to hunt the shark. While Brody lays down a chum line, Quint waits for an opportunity to hook the shark. Without warning, it appears behind the boat. Quint, estimating its length at 25 feet (7.6 m) and weight at 3 tonnes (3.0 long tons; 3.3 short tons), harpoons it with a line attached to a flotation barrel, but the shark pulls the barrel underwater and disappears.

At nightfall, Quint and Hooper drunkenly exchange stories about their assorted scars, and Quint reveals that he survived the USS Indianapolis. The shark returns unexpectedly, ramming the boat’s hull, and disabling the power. The men work through the night, repairing the engine. In the morning, Brody attempts to call the Coast Guard, but Quint, who has become obsessed with killing the shark without outside assistance, smashes the radio. After a long chase, Quint harpoons another barrel into the shark. The line is tied to the stern cleats, but the shark drags the boat backward, swamping the deck and flooding the engine compartment. Quint prepares to sever the line to prevent the transom from being pulled out but the cleats break off, keeping the barrels attached to the shark. Quint heads toward shore to draw the shark into shallower waters, but he pushes the damaged engine past the safety limits and the overtaxed engine fails.

With the Orca slowly sinking, the trio attempt a riskier approach. Hooper puts on scuba gear and enters the water in a shark-proof cage, intending to lethally inject the shark with strychnine, using a hypodermic spear. The shark attacks the cage, causing Hooper to drop the spear, which sinks and is lost. While the shark thrashes in the tangled remains of the cage, Hooper manages to escape to the seabed. The shark escapes and leaps onto the sinking deck of the boat, dragging Quint down and devouring him. Trapped on the sinking vessel, Brody jams a pressurized scuba tank into the shark’s mouth, and, climbing the crow’s nest, shoots the tank with Quint’s rifle. The resulting explosion obliterates the shark. Hooper surfaces, and he and Brody paddle back to Amity Island clinging to the remaining barrels.