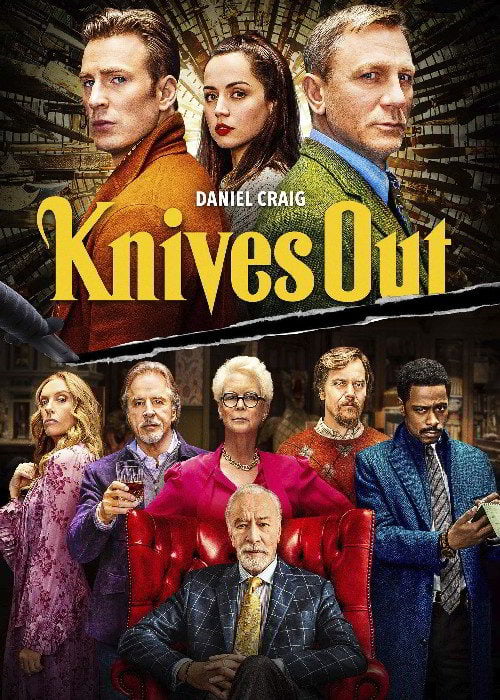 Taglines: Everyone has a motive. No one has a clue.

A detective investigates the death of a patriarch of an eccentric, combative family.

When renowned crime novelist Harlan Thrombey (Christopher Plummer) is found dead at his estate just after his 85th birthday, the inquisitive and debonair Detective Benoit Blanc (Daniel Craig) is mysteriously enlisted to investigate. From Harlan’s dysfunctional family to his devoted staff, Blanc sifts through a web of red herrings and self-serving lies to uncover the truth behind Harlan’s untimely death.


Wealthy mystery novelist Harlan Thrombey invites his family to his Massachusetts mansion for his 85th birthday party. The next morning, Harlan’s housekeeper Fran finds him dead, with his throat slit. The police believe it was suicide, but an anonymous party pays private eye Benoit Blanc to investigate.

Blanc learns that Harlan’s relationships with his family were strained: he threatened to expose his son-in-law Richard for cheating on his wife, Harlan’s daughter Linda; cut off his daughter-in-law Joni’s allowance for stealing from him; fired his son Walt from his publishing company; and had an altercation with his grandson Ransom.

Unbeknownst to Blanc, after the party, Harlan’s nurse Marta Cabrera apparently administered him an overdose of morphine by accident instead of his usual medication and could not find the antidote, leaving Harlan minutes to live. Knowing that Marta’s mother is an undocumented immigrant, Harlan prevented her from calling for help and instead gave her instructions to create a false alibi to save her family from scrutiny. Harlan then slit his own throat. Harlan’s elderly mother saw Marta carrying out Harlan’s instructions but mistook her for Ransom.

Marta cannot lie without vomiting, so she gives true but incomplete answers when Blanc questions her. After agreeing to assist in Blanc’s investigation, Marta conceals evidence of her actions as they search the property.

Harlan’s will is read: to everyone’s astonishment, he left everything to Marta. Ransom helps her escape the family’s wrath. Ransom coerces Marta into confessing to him and offers his help in exchange for a share of the inheritance. The other Thrombeys try to persuade Marta to renounce the inheritance; Walt threatens to expose her mother’s immigration status.

Marta receives an anonymous blackmail note with a partial photocopy of Harlan’s toxicology report. She and Ransom drive to the medical examiner’s office, but the building has been destroyed by arson. Marta receives an anonymous email proposing a rendezvous with the blackmailer. Blanc and the police spot Marta and Ransom, and after a brief car chase, Ransom is arrested; Blanc explains that Harlan’s mother saw Ransom climbing down from Harlan’s room the night he died.

Marta goes to the rendezvous and discovers Fran drugged. Marta hesitates, realizing that Fran can link her to the crime, but performs CPR on Fran and calls 911. Marta confesses to Blanc, but Ransom has already informed on her. At the house, Marta finds a copy of the full toxicology report hidden in Fran’s cannabis stash. Blanc reads it and interrupts Marta before she can confess to the family that her error caused Harlan’s death.

Blanc reveals his deductions: Ransom had learned that Harlan was leaving everything to Marta; he swapped the contents of Harlan’s medication vials and stole the antidote so Marta would kill Harlan with a morphine overdose, making her ineligible to claim the inheritance by the slayer rule. However, Marta actually administered the correct medication, recognizing it by its viscosity without reading the label, and therefore is innocent of Harlan’s death. After the death was reported a suicide, Ransom anonymously hired Blanc to expose Marta as a murderer. Fran later saw Ransom hiding evidence and sent him the blackmail note. Realizing that Marta had unknowingly given Harlan the correct medication but believed herself guilty, Ransom forwarded the note to Marta. He burned down the medical examiner’s office to destroy evidence of Marta’s innocence. Finally, he overdosed Fran with morphine and emailed her location to Marta, planning to frame Marta for Fran’s murder.

Marta tricks Ransom into confessing by lying that Fran has survived and will implicate him; after he confesses and vows revenge, she vomits on him, revealing that Fran has in fact died. Enraged, he attacks her with what turns out to be a retractable stage knife. Having recorded Ransom’s confession, the police arrest him.

Blanc reveals to Marta that he realized early on that she played a part in Harlan’s death, noting a small spot of blood on one of her shoes. Linda finds a note from Harlan revealing her husband’s adultery. As Ransom is taken into custody, Marta watches the Thrombeys from the balcony of what is now her mansion.