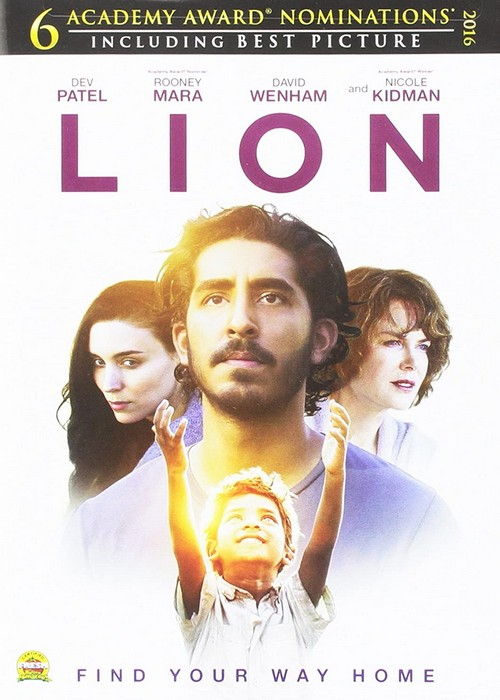 Taglines: The true story of a life lost and found

Based on A Long Way Home by Saroo Brierley

In 1986, Saroo was a five-year-old child in India of a poor but happy rural family. On a trip with his brother, Saroo soon finds himself alone and trapped in a moving decommissioned passenger train that takes him to Calcutta, 1000 miles away from home. Now totally lost in an alien urban environment and too young to identify either himself or his home to the authorities, Saroo struggles to survive as a street child until he is sent to an orphanage. Soon, Saroo is selected to be adopted by the Brierley family in Tasmania, where he grows up in a loving, prosperous home. However, for all his material good fortune, Saroo finds himself plagued by his memories of his lost family in his adulthood and tries to search for them even as his guilt drives him to hide this quest from his adoptive parents and his girlfriend. Only when he has an epiphany does he realize not only the answers he needs, but also the steadfast love that he has always had with all his loved ones in both worlds.

Saroo Brierly is a young man obsessed with thoughts of a mysterious past. He was born in Calcutta, a densely populated Indian city, into a family of poor but dearly loving parents. By negligence, at the age of five, he got on a train going in an unknown direction, and since then he has not seen relatives. Despite his young age, the boy managed to get a second chance – he was adopted by an adoptive family of Australians, who ensured a full and healthy childhood. The couple loved and pampered the child, but, despite the care, the thought of their native places did not give him rest. Scraps of childhood memories formed a bizarre picture that worries the soul.

Growing up, the hero more often recalled the abandoned house and lost relatives. He often thought about India, about mother and father, believing that, despite the elapsed amount of time, they did not lose hope of meeting their son again one day. The young man even finds a parental home on Google maps, enjoying the vaguely pop-up landscapes. He decides to go on a trip and return home to see everything left and lost with his own eyes, as well as find relatives. The homeland is restless and crowded, but he is confident that the heart will help to find the right path.

A five-year-old Indian boy is adopted by an Australian couple after getting lost hundreds of kilometers from home. 25 years later, he sets out to find his lost family.


In 1986, Saroo, a five-year-old boy, lives with his elder brother Guddu, his mother and his younger baby sister in Khandwa, India. Guddu and Saroo steal coal from freight trains to trade for milk and food. One day, Saroo follows his brother to a job and they arrive at a nearby train station, where Saroo decides to stay back and take a nap. Guddu tries to wake him up, but Saroo is too tired. When Guddu does not return, Saroo searches for him and boards a train presuming Guddu is aboard. He falls asleep again in one of the compartments, and wakes up to find the train in motion. After several days, it arrives in faraway Calcutta, where he does not understand the local Bengali language. He stands at a ticket counter and tries to obtain a ticket home, but the attendant does not recognise the name of his village, which Saroo says is “Ganestalay”.[4] He spends the night in the station with some streetchildren, but is then woken up and forced to run when a group of men try to kidnap them.

Saroo continues to wander around the city before coming across Noor, a seemingly friendly woman who takes him back to her apartment. She tells Saroo that a man named Rama will help him find his way home. Saroo runs away, sensing that Noor and Rama have sinister intentions, and escapes Noor when she chases after him. After two months of living near the Howrah Bridge, Saroo is taken to the police by a young man. Unable to trace his family, they put him in an orphanage. Three months later, Saroo is introduced to Mrs. Sood, who tells him she has placed an advertisement about him in several local newspapers, but no one has responded. She then tells him that an Australian couple is interested in adopting him. She begins to teach Saroo basic English and he moves to Hobart, Tasmania in 1987, under the care of Sue and John Brierley, where he slowly starts to settle in with them. A year later, they adopt another boy, Mantosh, who has trouble adjusting to his new home and suffers from rage and self-harm.

Twenty years later, Saroo, now a young man, moves to Melbourne to study hotel management. He starts a relationship with Lucy, an American student. During a meal with some Indian friends at their home, he comes across jalebi, a delicacy he remembers from his childhood. Saroo reveals that he is not from Calcutta and that he has been lost for more than twenty years, and his friends suggest he use Google Earth to search for his hometown in India. Saroo begins his search, but over time disconnects from Lucy, overwhelmed by the thought of emotions his family must have gone through when he was missing.

Saroo visits Sue, whose health is deteriorating, and learns that she is not infertile, but had chosen to help others in need through adoption, believing that there were already too many people on Earth. After reconciling with Lucy, Saroo spends a long time searching fruitlessly for his hometown. One evening, while scanning Google Earth, he notices the rock formations where his mother worked, and then finds the area where he lived: the Ganesh Talai neighbourhood of the Khandwa district. He finally tells his adoptive mother about his search, and she fully supports his efforts.

Saroo returns to his hometown, and with the help of a local English speaker, has an emotional reunion with his biological mother and sister. He also learns that Guddu is dead. Saroo’s mother never gave up hope and believed that one day her missing son would return, and never moved away from the village. The film ends with captions about the real Saroo’s return to India in February 2012, including the fact his brother Guddu was killed by a train the same night that they were separated as children. Photos of the real Australian family are shown, as well as footage of Saroo introducing Sue to his biological mother in India, who deeply appreciates Sue’s care for her son. Saroo later learned that he had been mispronouncing his own name, which was actually Sheru, meaning “lion”.