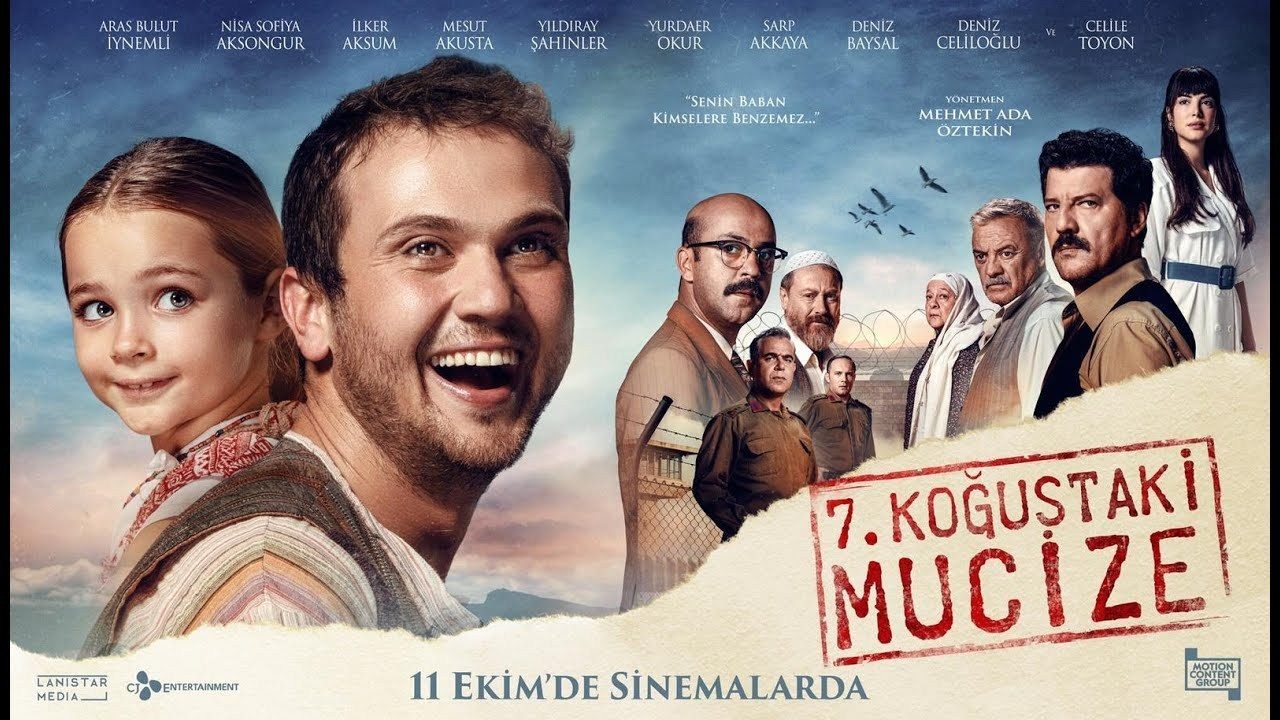 This reel gives a heartwarming story of a father and a daughter and so appropriate at this particular time that most families are ‘quarantined’ together.

It is based on an original 2013 Korean movie with the same plot. It is showing on Nextflix.

Memo, a shepherd suffering from a mental disability , lives with his little girl and her grandmother in a village on the Aegean coast of Turkey during the period of the coup . One fine day, in 1983, Memo’s life was suddenly turned upside down when the daughter of the commander, a senior official during martial lawdies. Memo is wrongly accused of murder and is sentenced to death. He ends up in prison in cell number seven. It is unlikely that he will survive there but while everyone in cell seven initially greeted him with hatred, they gradually begin to be convinced of his innocence by testifying to his big heart. Over time, all those whom Memo touches mobilize to save his life.

A man who is charged with sexual assault, kidnapping and murder goes to jail. Years after, his daughter becomes a lawyer and wants to prove her father’s innocence.

Separated from his daughter, a father with an intellectual disability must prove his innocence when he is jailed for the death of a commander’s child.

The highly-rated 2019 film that was directed by Mehmet Ada Öztekin, is based in Turkey and stars Aras Bulut who plays the role of Memo, a mentally ill man.

Memo and his daughter, Ova (Nisa Sofiya Aksongu) have a special relationship and with stand all the mockery they get from their village.

It happens that Memo witnesses the death of a young girl and is wrongfully accused and sentenced to death for the said crime.

The title is set in the prison where Memo lives with other inmates. The rest is a tale of sadness and anger and if you follow keenly, you will shed a tear if you get your emotions get so attached into the story.

Miracle in Cell No.7 goes beyond the love of a father and daughter and even speaks to the way the other inmates grow fond of Memo who is innocent.

The miracle is indeed in cell number seven and his daughter Ova is at the center of it.

The plot is thick and all the right emotions are elicited. The writer of the movie vividly painted the picture of what true love is. It is a great movie for family viewing.


The Turkish movie, Miracle in Cell No.7 is based on a 2013 South Korean drama of the same name and was released on October 10, 2019. Although both movies bear the same title, there are significant differences in their respective plots.

The drama centres around the relationship between a six-year old girl and her mentally challenged father, who was accused of murdering the daughter of a Lieutenant Colonel. Aras Bulut Iynemli, who played Memo and Nisa Sofiya Aksongur, who played Ova seemed to portray an unbreakable bond despite the dicrimination by her peers at school. Her dream of getting a red Heidi bag was crushed when Seda’s father, the Commander, purchased the bag and struck Memo, who wanted to make his daughter happy by all means. While herding his flock of sheep on the rocks, he came across little children playing and then, of course, they mocked him and it pretty much seemed like he enjoyed it (not consciously though). In a bid to get the backpack from the little girl, she tripped, hit her head on a rock and fell into the lake. Memo was greatly alarmed and restless and in a bid to wake her up from “death” with her lifeless body in his arms, he was accused of her murder. He was sentenced to death under Article 450, Paragraph 3 and 4 of the Turkish Criminal Law after so much torture commissed by Lieutenant Colonel Faruk, Seda’s father.

While in the prison yard, he saved the life of Askorozlu, the most dreaded prisoner who was attacked by a supposed prisoner of fate. Askorozlu was the only one that could make demands from the guards which would be granted and to repay Memo, he arranged to bring Ova to see her father. Not only were the other inmates convinced that Memo had a mental problem even when the hospital said he was sane, they were also convinced that he was innocent of the charges against him.

I was really moved in the scenes where he was not allowed to see his daughter, while they kept on screaming the names of each other. When they finally met, I could see that a hole was filled, he was revived again, so much tears of joy and love in the air. This movie has shown that genuine affection for a loved one cannot be broken. I was furious when the commander shot the only witness that could have saved Memo’s life; it was obvious that he was bent on killing Memo probably because of Memo’s earlier harmless confrontation with the commander. The glitch I had with this movie was the part where a certain prisoner was always looking at a tree which many would call a stain on the wall. Those scenes were unnecessary and I had to go back to get his point on many occasions. His role was realized at the end of the movie and that is where the miracle took place.

The sound of the movie was really commendable: the chirping of birds, barking dog, the voice of a nightingale, the sounds of blows and slaps thrown at Memo amongst other captivating moments. I would say that my favorite character was Ova. A brave and courageous six-year old, unashamed of the mental state of her dad. Her ability to keep calm when her grandma died was also challenging to me. All she wanted was for her dad to come home and she went the extra mile both to see him and also to ensure his release by meeting the deserter.

This is a very heart-warming movie that everyone should/must see. It is rated 16, by the way. Ensure you get a box of tissues ready because tears shall flow like living waters.

Watch Miracle in Cell No.7 Movie With English Subtitles – FULLHD