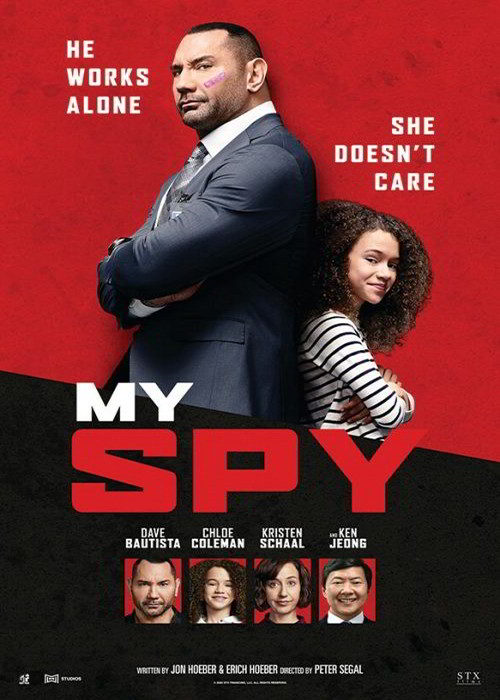 After a stupid CIA agent, after he medically failed the operation, killing in cold blood all those who were planned to be detained for valuable witness testimony, they say that he is not suitable for intelligence service, but they give him the last opportunity to rehabilitate himself – to establish secret surveillance of an ordinary city apartment.

Sophie is a sweet and charming nine-year-old girl who is not loved at school. Arrogant and spoiled classmates do not want to take her into their company and systematically offend a calm and restrained baby who cannot resist. She is so tired of enduring loneliness, constant nit-picking and humiliation that she would like to switch to home schooling, but her mother does not understand the seriousness of the situation, considering her daughter’s request a child’s whims.

This should not have happened, but one day a young schoolgirl notices hidden cameras at home, and soon she finds a hapless operative along with all the equipment. She offers a mutually beneficial deal – in return for silence, he will teach her espionage tricks. The cool special agent is forced to agree, but the little partner, as it turned out, is able to teach him something – for example, to skate, dance and enjoy life.

A hardened CIA operative finds himself at the mercy of a precocious 9-year-old girl, having been sent undercover to surveil her family.


JJ is a former US Special Forces soldier newly hired as a CIA operative. However, JJ’s lack of subtlety causes him to blow his first major mission: busting an illegal weapons-grade plutonium trade between the Russian mafia and Hassan, a Middle East terrorist. Despite this, his boss David Kim assigns him and tech operator Bobbi, who hero-worships JJ, to keep an eye on the in-law family of Victor Marquez, a French illegal arms dealer who has obtained construction plans for a miniaturized nuclear bomb which he intends to sell to Hassan. Victor lost these plans to his brother David, who hid them before he was murdered by Victor; Kim suspects that the plans may be in the possession of David’s American wife Kate and their 9-year-old daughter Sophie, who moved from France back to Wicker Park, Chicago, after David’s demise.

JJ and Bobbi move into the building where Kate and Sophie live, and set up their surveillance. However, Sophie soon finds one of their hidden cameras, backtracks its signal and stumbles upon the operation post. Confronting JJ and Bobbi, she blackmails JJ into keeping her company while she tries to fit into an American kid’s life and make some new friends at her school Oaktree Charter School. Despite JJ’s social awkwardness, the two slowly begin to bond, and JJ also becomes acquainted with Kate and her neighbors Carlos and Todd. Sophie has JJ train her in the basics of the espionage trade, and brings him and her mother closer together.

However, Kim eventually finds out about JJ’s personal involvement with his targets and takes him and Bobbi off the mission. JJ reveals his assignment to Kate, who rejects him in disgust. At the same time, Victor discovers and counteracts the CIA’s surveillance and coerces his lawyer Koll into revealing where David might have hidden the plans. After faking his own death, he travels to Chicago, confronts Kate, JJ and Sophie and retrieves the plans. Carlos and Todd burst in and intervene, revealing themselves as independent arms dealers who are also after the plans. Bobbi’s clumsy attempt to help results in Victor escaping with the plans and Sophie as his hostage.

JJ and Kate pursue Victor to an airfield in Naperville, where JJ grounds Victor’s escape plane and starts a fistfight with him. In her attempt to escape, Sophie accidentally sets the plane in motion, leaving it hanging at the edge of a cliff on some wire fencing. Victor forces Sophie, who has hidden the real plans, to surrender them. Before he can shoot them, Kate clubs him onto the fence and JJ pushes the plane off the cliff, sending Victor to his death. After being reinstated by Kim for his success, JJ has himself permanently assigned to Chicago, where he moves in with Kate and Sophie.