The Good, the Bad and the Ugly
Next Video 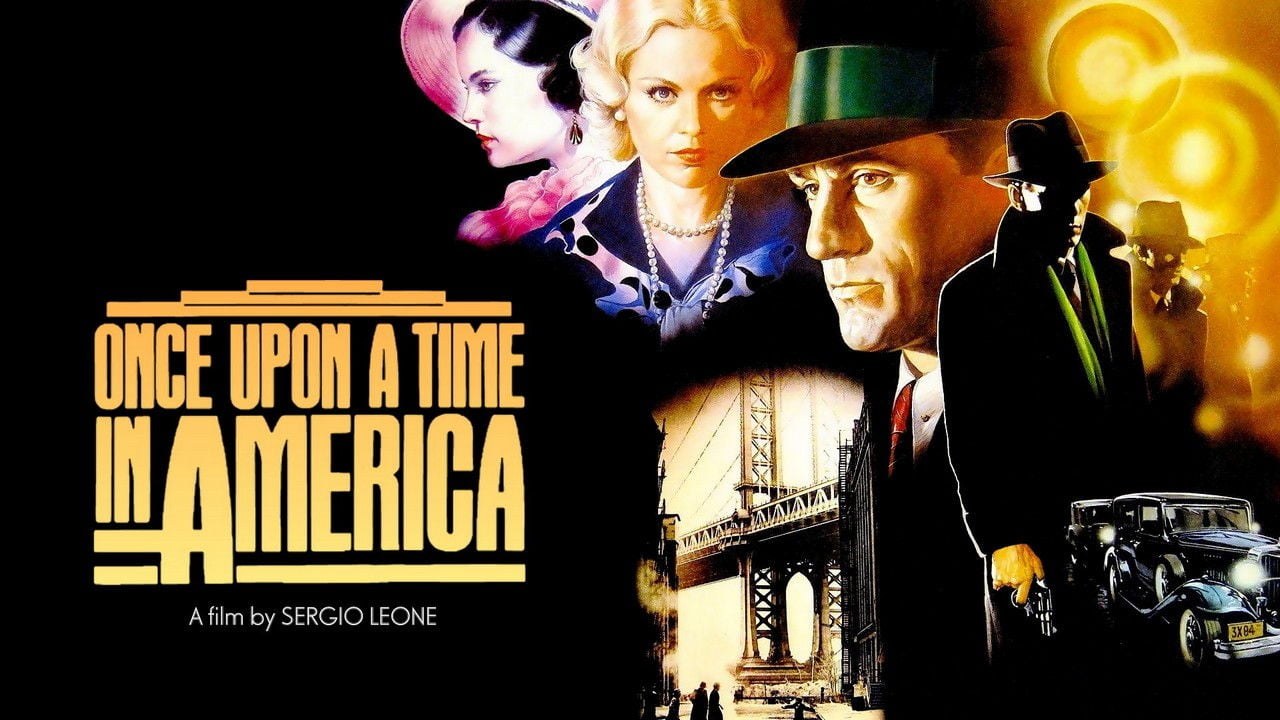 Play Now Once Upon a Time in America Full Movie

Taglines: As boys, they made a pact to share their fortunes, their loves, their lives. As men, they shared a dream to rise from poverty to power. Forging an empire built on greed, violence and betrayal, their dream would end as a mystery that refuse to die.

It was the final film directed by Leone before his death five years later, and the first feature film he had directed in 13 years. It is also the third film of Leone’s Once Upon a Time Trilogy, which includes Once Upon a Time in the West (1968) and Duck, You Sucker! (1971). The cinematography was by Tonino Delli Colli, and the film score by Ennio Morricone. Leone originally envisaged two three-hour films, then a single 269-minute (4 hours and 29 minutes) version, but was convinced by distributors to shorten it to 229 minutes (3 hours and 49 minutes). The American distributors, The Ladd Company, further shortened it to 139 minutes, and rearranged the scenes into chronological order, without Leone’s involvement. The shortened version was a critical and commercial flop in the United States, and critics who had seen both versions harshly condemned the changes that were made. The original “European cut” has remained a critical favorite and frequently appears in lists of the greatest gangster films of all time.

A former Prohibition-era Jewish gangster returns to the Lower East Side of Manhattan over thirty years later, where he once again must confront the ghosts and regrets of his old life.

The beginning of the XX century, the Jewish quarter in the East Side. Four boys grew up on the street and have been together since childhood. They are best and faithful friends. Severe living conditions brought them to the criminal path: during the heyday of Prohibition, they got rich on bootlegging. To survive, you must be able to spin and neglect the laws, if it makes a profit. The company remained harmonious, despite the presence in it of two personalities with leadership qualities. The boys did not enter into serious disputes, and their relationship strengthened every year, becoming stronger.
The group of young bandits became famous throughout the city, and even influential moneybags in high positions began to become interested in their activities and seek their support. Fifty years after their acquaintance, the Noodles returned to their native place to deal with old affairs and recall past days. He is one of the members of that bandit group, and his real name is David Aaronson. The man blames himself for the death of close friends: one mistake was prohibitively expensive. But it turns out that there were many more details in the incident. Betrayal, love and a sincere relationship between childhood comrades occur against the backdrop of sophisticated crimes.

Based on The Hoods by Harry Grey

Once Upon a Time in America (Italian: C’era una volta in America) is a 1984 epic crime drama film co-written and directed by Italian filmmaker Sergio Leone and starring Robert De Niro and James Woods. The film is an Italian–American[3] venture produced by The Ladd Company, Embassy International Pictures, PSO Enterprises, and Rafran Cinematografica, and distributed by Warner Bros. Based on Harry Grey’s novel The Hoods, it chronicles the lives of best friends David “Noodles” Aaronson and Maximilian “Max” Bercovicz as they lead a group of Jewish ghetto youths who rise to prominence as Jewish gangsters in New York City’s world of organized crime. The film explores themes of childhood friendships, love, lust, greed, betrayal, loss, broken relationships, together with the rise of mobsters in American society.

Three thugs enter a Chinese wayang theater, looking for a marked man. The proprietors slip into a hidden opium den and warn a man named “Noodles”, but he pays no attention. In a flashback, Noodles observes police removing three disfigured corpses from a street. Although he kills one of the thugs pursuing him, Noodles learns they have murdered Eve, his girlfriend, and that his money has been stolen, so he leaves the city.

David “Noodles” Aaronson struggles as a street kid in a neighborhood on Manhattan’s Lower East Side in 1918. He and his friends Patrick “Patsy” Goldberg, Philip “Cockeye” Stein and Dominic commit petty crimes under the supervision of local boss, Bugsy. Planning to rob a drunk as a truck hides them from a police officer, they’re foiled by Maximillian “Max” Bercovicz, who jumps off the truck to rob the man himself. Noodles confronts Max, but a crooked police officer steals the watch that they are fighting over. Later, Max blackmails the police officer, who is having sex with Peggy, a young girl and Noodles’ neighbor. Max, Noodles, Patsy, Dominic and Cockeye start their own gang, independent of Bugsy, who had previously enjoyed the police officer’s protection.

The boys stash half their money in a suitcase, which they hide in a locker at the railway station, giving the key to “Fat” Moe Gelly, a reliable friend who is not part of the operation. Noodles is in love with Fat Moe’s sister, Deborah, an aspiring dancer and actress. After the gang has some success, Bugsy ambushes the boys and shoots Dominic, who dies in Noodles’ arms. In a rage, Noodles stabs Bugsy and severely injures a police officer. He is arrested and sentenced to prison.

Noodles is released from jail in 1930 and is reunited with his old gang, who are now major bootleggers during Prohibition. Noodles also reunites with Deborah, seeking to rekindle their relationship. During a robbery, the gang meet Carol, who later on becomes Max’s girlfriend. The gang prospers from bootlegging, while also providing muscle for union boss Jimmy Conway O’Donnell.

Noodles tries to impress Deborah on an extravagant date, but then rapes her after she declines his marriage proposal, as she intends to pursue a career in Hollywood. Noodles goes to the train station looking for Deborah, but when she spots him from her train seat, she simply closes the blind.

The gang’s financial success ends with the 1933 repeal of Prohibition. Max suggests joining the Teamsters’ union, as muscle, but Noodles refuses. Max acquiesces and they go to Florida, with Carol and Eve, for a vacation. While there, Max suggests robbing the New York Federal Reserve Bank, but Noodles regards it as a suicide mission.

Carol, who also fears for Max’s life, convinces Noodles to inform the police about a lesser offense, so the four friends will safely serve a brief (“probably one year”) jail sentence. Minutes after calling the police, Max knocks Noodles unconscious during an argument. Regaining consciousness, Noodles finds out that Max, Patsy, and Cockeye have been killed by the police, and is consumed with guilt over making the phone call. Noodles retrieves the suitcase in which the gang had stored their money, now finding it empty. With his friends killed, and himself hunted, a despondent Noodles then boards the first bus leaving New York, going to Buffalo, to live under a false identity, Robert Williams.

In 1968, Noodles receives a letter informing him that the cemetery where his friends are buried is being redeveloped, asking him to make arrangements for their reburial. Realizing that someone has deduced his identity, Noodles returns to Manhattan, and stays with Fat Moe above his restaurant. While visiting the cemetery, Noodles finds a key to the railway locker once kept by the gang. Opening the locker, he finds a suitcase full of money but with a note stating that the cash is a down-payment on his next job.

Noodles hears about a corruption scandal and assassination attempt on U.S. Secretary of Commerce Christopher Bailey, an embattled political figure, mentioned in a news report.

Noodles visits Carol, who lives at a retirement home run by the Bailey Foundation. She tells him that Max planted the idea of Carol and Noodles tipping him off to the police, because he wanted to die rather than go insane like his father, who died in an asylum; Max opened fire on the police to ensure his own death.

While at the retirement home, Noodles sees a photo of Deborah at the institution’s dedication. Noodles tracks down Deborah, still an actress. He questions her about Secretary Bailey, telling her about his invitation to a party at Bailey’s mansion. Deborah claims not to know who Bailey is and begs Noodles to leave via the back exit, as Bailey’s son is waiting for her at the main door. Ignoring Deborah’s advice, Noodles sees Bailey’s son David, who is named after Noodles and bears a strong resemblance to Max as a young man. Thus, Noodles realizes that Max is alive and living as Bailey.

Noodles meets with Max in his private study during the party. Max explains that corrupt police officers helped him fake his own death, so that he could steal the gang’s money and make Deborah his mistress in order to begin a new life as Bailey, a man with connections to the Teamsters’ union, connections that have now gone sour.

Now faced with ruin and the specter of a Teamster assassination, Max asks Noodles to kill him, having tracked him down and sent the invitation. Noodles, obstinately referring to him by his Secretary Bailey identity, refuses because, in his eyes, Max died with the gang. As Noodles leaves Max’s estate, he hears a garbage truck start up and looks back to see Max standing at his driveway’s gated entrance. As he begins to walk towards Noodles, the truck passes between them. Noodles sees the truck’s auger grinding down rubbish, but Max is nowhere to be seen.

The end returns to the opening scene in 1933, with Noodles entering the opium den after his friends’ deaths, taking the drug and broadly grinning.