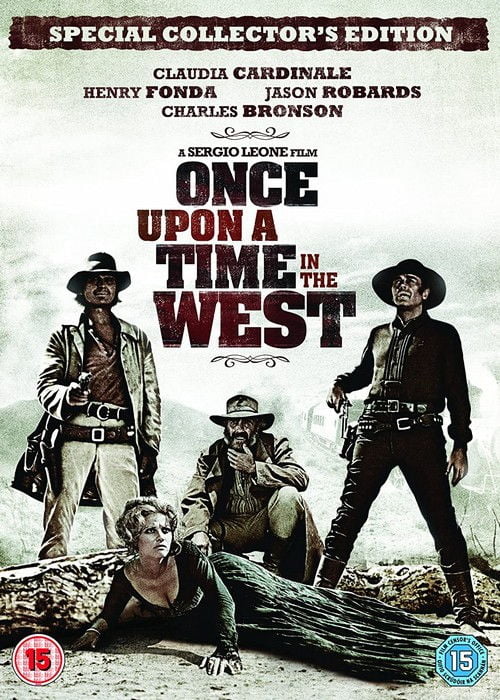 Also Known As: There Was Once the West.

Taglines: There were three men in her life. One knew her past. One wanted her land. One wanted revenge.

Once Upon a Time in the West (Italian: C’era una volta il West, transl. ”Once upon a time (there was) the West”) is a 1968 epic Spaghetti Western film directed by Sergio Leone, who co-wrote it with Sergio Donati based on a story by Dario Argento, Bernardo Bertolucci and Leone. It stars Henry Fonda, cast against type, as the villain, Charles Bronson as his nemesis, Jason Robards as a bandit and Claudia Cardinale as a newly widowed homesteader. The widescreen cinematography was by Tonino Delli Colli, and the acclaimed film score was by Ennio Morricone.

An entrepreneur longs to build a railroad through Flagstone. However, an unyielding farmer, Jill McBain, who refused to sell part of his land, became his path, for which he was killed. The owner of the site is now his wife Jill, but she, too, refuses the dealer to sell. Fearing for her life, the widow turns to the best shooters of the Wild West.

Sergio Leone, after his previous film, The Good, the Bad and the Ugly, wanted to end the Western genre, especially since the director had long been considering a project that eventually turned into a film Once Upon a Time in America. However, the producers refused to finance Leone’s new work until he removes another western, and work on the drama Once Upon a Time in the Wild West began.

A mysterious stranger with a harmonica joins forces with a notorious desperado to protect a beautiful widow from a ruthless assassin working for the railroad.

Jill McBain travels to the wild frontier; Utah – where she and her new husband planned to settle down. Upon arrival, she finds him and his children dead. There’s a lot of land, and potential, but there’s those who want to take it – at any cost. Even if it means killing a man and his kids.


The film portrays two conflicts that take place around Flagstone, a fictional town in the American Old West: a land battle related to the construction of a railroad, and a mission of vengeance against a cold-blooded killer. A struggle exists for Sweetwater, a piece of land in the desert outside Flagstone which contains the region’s only other water source. The land was bought by Brett McBain (Frank Wolff), who foresaw that the railroad would have to pass through that area, to provide water for the steam locomotives. When crippled railroad tycoon Morton (Gabriele Ferzetti) learns of this, he sends his hired gun Frank (Henry Fonda) to intimidate McBain to move off the land, but Frank instead kills McBain and his three children, planting evidence to frame the bandit Cheyenne (Jason Robards). Meanwhile, former prostitute Jill (Claudia Cardinale) arrives at Flagstone from New Orleans, revealing that she is McBain’s new wife and therefore the owner of the land.

The film opens with a mysterious harmonica-playing gunman (Charles Bronson), whom Cheyenne later dubs “Harmonica”, shooting three men sent by Frank to kill him. In a roadhouse on the way to Sweetwater, where he also encounters Mrs. McBain, Harmonica informs Cheyenne that the three gunfighters appeared to be posing as Cheyenne’s men. Cheyenne arrives at Sweetwater soon after and both men seem attracted to Mrs. McBain. Harmonica explains that, according to the contract of sale, she will lose Sweetwater unless the station is built by the time the track’s construction crews reach that point, so Cheyenne puts his men to work building it.

Frank turns against Morton, who wants to make a deal with Mrs. McBain, and immobilizes him under guard on his private train out in the desert. Instead, Mrs. McBain allows Frank to seduce her, seemingly to save her life, and is then forced to sell her property in an auction where Frank’s men intimidate the other bidders. Harmonica disrupts Frank’s plan to keep the price down when he arrives, holding Cheyenne at gunpoint, and makes a much higher bid with the reward money for the wanted Cheyenne. But as Cheyenne is placed on a train bound for the Yuma prison, two members of his gang purchase one-way tickets for the train, intending to help him escape.

Morton now pays Frank’s men to turn against him. However, Harmonica helps Frank kill them by directing his attention to their whereabouts from the room where Mrs. McBain is taking a bath. On Frank’s return to Morton’s train, he finds that Morton and his remaining men have been killed in a battle with Cheyenne’s gang. Frank then goes to Sweetwater to confront Harmonica. On two occasions, Frank has asked him who he is, but both times Harmonica only answered with names of men “who were alive before they knew you”. This time, Harmonica says he will reveal who he is “only at the point of dying”.

As the two prepare for a gun duel, Harmonica’s motive is revealed in a flashback. A younger Frank forces a boy to support his older brother on his shoulders, while his brother’s neck is in a noose strung from an arch. As the boy struggles to hold his brother’s weight, Frank stuffs a harmonica into the panting boy’s mouth. The older brother curses Frank, and the boy (who will grow up to be Harmonica) collapses to the ground. Back in the present, Harmonica draws first and shoots Frank. He then stuffs his harmonica into the dying Frank’s mouth as a reminder.

At the house again, Harmonica and Cheyenne say goodbye to Mrs. McBain, who is supervising the construction of the railway station as the track-laying crews reach Sweetwater. As the two men ride off, Cheyenne falls, admitting that he was mortally wounded by Morton during the fight with Frank’s gang. While Harmonica rides away with Cheyenne’s dead body, the work train arrives and Mrs. McBain carries water to the rail workers.