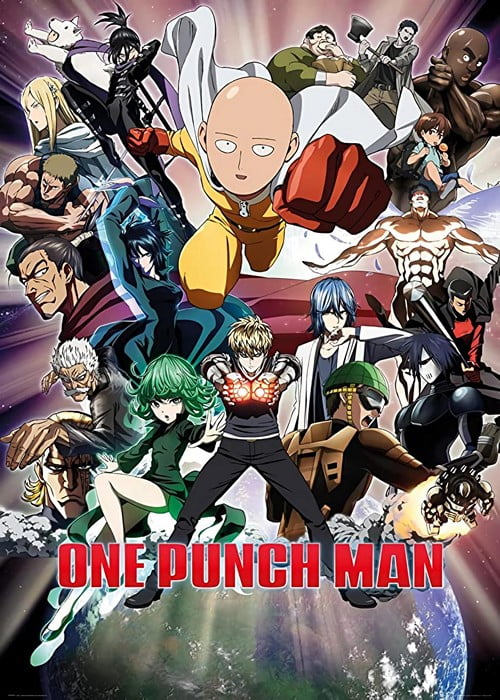 During the meeting, Garou insults both the heroes and the villains, saying that he is on the side of monsters and declares everyone as his enemy. He beats up everyone using his martial arts skill except Sitch as a message to spread the word of Garou. Meanwhile, Saitama is at his house playing video games on the PlayStation Portable that he stole from King, while Genos is doing chores when Genos hears a knock on the door. Genos opens the door to see Speed O Sound Sonic trying to find Saitama to fight him. While Genos and Sonic fight someplace else, Fubuki, going by Hellish Blizzard, is the B-Class Rank 1 hero who tries to persuade Saitama to join her faction. Fubuki fails to convince Saitama, and orders her underlings to attack him, but Saitama easily beats them in one punch. Fubuki uses her psychic abilities to seemingly defeat Saitama, but Saitama remains unfazed from her attacks. He then berates her for surrounding herself with underlings, as she thinks that if she’s surrounded by underlings she would be stronger. However, he tells her she would eventually face a villain that would be stronger than her and her underlings. Saitama proclaims that factions are useless, and warns the esper to never insult heroes ever again. Fubuki ignores his lecture and tries to attack him again, but Saitama sees Sonic and Genos fighting behind her and an imminent explosion. When the explosion clears, it is shown that Saitama saved Fubuki from the blast while remaining unscathed himself. During the scuffle, it seems that there is no clear winner as Sonic is too fast while Genos is way too durable. Genos tries to create a huge explosion which would knock out Sonic, but Saitama knocks Genos down, reminding him that if he made the explosion, it would have destroyed Saitama’s apartment. Saitama then challenges Sonic, and hilariously counters Sonic’s shadow clone move with Killer Move: Serious Series Sideway Jumps (by side jumping really fast). Sonic is shocked, and in the moment Sonic passes through the after images, he crashes to the ground, badly bruised and defeated, while Fubuki watches the whole thing in awe of Saitama’s ease of defeating such an obviously powerful opponent. Later in Saitama’s apartment, Fubuki reveals that she is the younger sister of Tatsumaki, S Class Hero Rank 2 known as Tornado of Terror. Due to Tatsumaki being overwhelmingly strong compared to her, Fubuki gathers underlings to be stronger. Genos asks why she doesn’t strive to be Class A Rank 1, but Fubuki says she can’t because Amai Mask is Class A Rank 1, and he is too strong which would also explain why Atomic Samurai’s disciples can’t join their master in Class S. Elsewhere, Amai Mask brutally kills a monstrous caveman named Suppon, emphasizing her point. Fubuki also says that she would never be Rank Number 1. Fubuki tries to convince Saitama one last time to join her faction, but Saitama refuses. Before Fubuki could insult him, King arrives to retrieve his video game. Fubuki is shocked to be in King’s presence, while Saitama tries to explain that he accidentally destroyed the PSP as well as erased King’s saved data. The Hero Association gives Saitama the hero name Caped Baldy because of his appearance, while Genos is named Demon Cyborg due to his aggressive attacks. In the closing scene, Garou defeats Tank Top Vegetarian in an alleyway.

Garou issues a declaration of war on the Hero Association through terrifying means, Hellish Blizzard gives Saitama an ultimatum, and Genos decides to eliminate his master’s stalker, Speed-o’.