V for Vendetta
Next Video 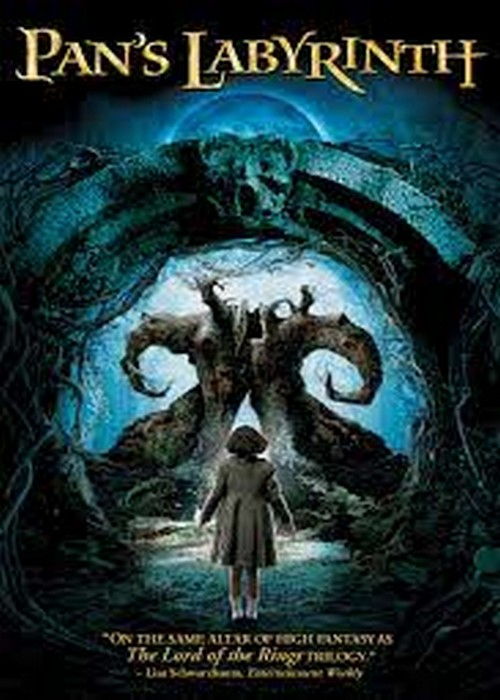 Taglines: Innocence is stronger than evil!

The film takes place in Spain during the Second World War.

A ten-year-old girl named Ofelia, living in a world of fairy tales, magic and miracles and often forgetting about the real world, with her mother named Carmen arrives in the Spanish outback. Not so long ago, Carmen, who lost her husband many years ago, again married an officer of the Spanish army named Vidal. Being a cruel, cynical and indifferent to all troubles man, he does everything in order to clear the territory of rebels on the orders of General Franco. Pregnant Carmen and her daughter are a burden for the officer, but he wants his son to be born next to him.
Soon Ofelia discovers a secret labyrinth, located near the house of Officer Vidal, where they settled. In the evening, she discovers here a strange creature resembling a man from a tree – a pan. He reveals to Ofelia the secret of her true purpose. It turns out that she is the daughter of an underground king who, centuries ago, escaped from her father’s house to look at the moon world. However, then the princess lost her way home and died, because of which her father, the king of the underground kingdom, dug many passages so that his newly born daughter could find her way home. However, before this, Ophelia will have to complete three tasks of Pan.

In the Falangist Spain of 1944, the bookish young stepdaughter of a sadistic army officer escapes into an eerie but captivating fantasy world.

In 1944 Falangist Spain, a girl, fascinated with fairy-tales, is sent along with her pregnant mother to live with her new stepfather, a ruthless captain of the Spanish army. During the night, she meets a fairy who takes her to an old faun in the center of the labyrinth. He tells her she’s a princess, but must prove her royalty by surviving three gruesome tasks. If she fails, she will never prove herself to be the true princess and will never see her real father, the king, again.

In a fairy tale, Princess Moanna, whose father is the king of the underworld, visits the human world, where the sunlight blinds her and erases her memory. She becomes mortal and eventually dies. The king believes that eventually, her spirit will return to the underworld, so he builds labyrinths, which act as portals, around the world in preparation for her return.

In 1944 Francoist Spain, ten-year-old Ofelia travels with her pregnant but sickly mother Carmen to meet Captain Vidal, her new stepfather. Vidal, the son of a famed commander who died in Morocco, believes strongly in Falangism and has been assigned to hunt down republican rebels. A large stick insect, which Ofelia believes to be a fairy, leads Ofelia into an ancient stone labyrinth, but she is stopped by Vidal’s housekeeper Mercedes, who is secretly supporting her brother Pedro and other rebels. That night, the insect appears in Ofelia’s bedroom, where it transforms into a fairy and leads her through the labyrinth. There, she meets a faun, who believes she is the reincarnation of Princess Moanna. He gives her a book and tells her she will find in it three tasks to complete in order for her to acquire immortality and return to her kingdom.

Ofelia completes the first task — retrieving a key from the belly of a giant toad — but becomes worried about her mother, whose condition is worsening. The faun gives Ofelia a mandrake root, instructing her to keep it under Carmen’s bed in a bowl of milk and regularly supply it with blood, which seems to ease Carmen’s illness. Accompanied by three fairy guides and equipped with a piece of magic chalk, Ofelia then completes the second task — retrieving a dagger from the lair of the Pale Man, a child-eating monster. Although warned not to consume anything there, she eats two grapes, awakening the Pale Man. He devours two of the fairies and chases Ofelia, but she manages to escape. Infuriated at her disobedience, the faun refuses to give Ofelia the third task.

During this time, Ofelia quickly becomes aware of Vidal’s ruthlessness in the course of hunting down the rebels. After he erroneously murders two local farmers detained on suspicion of aiding the rebels, Vidal interrogates and tortures a captive rebel. He asks Doctor Ferreiro to tend to the captive, whom Ferreiro then euthanises at the rebel’s own urging. Realising that Ferreiro is a rebel collaborator, Vidal kills him. Vidal later catches Ofelia tending to the mandrake root, which he considers delusional. Carmen agrees and throws the root into the fire. She immediately develops painful contractions and dies giving birth to Vidal’s son.

Mercedes, having been discovered to be a spy, tries to escape with Ofelia, but they are caught. Ofelia, mistaken as a traitor, is locked in her bedroom, while Mercedes is taken to be interrogated and tortured. Mercedes frees herself, stabs Vidal, and re-joins the rebels. The faun, having changed his mind about giving Ofelia a chance to perform the third task, returns and tells her to bring her newborn brother into the labyrinth to complete it. Ofelia successfully retrieves the baby and flees into the labyrinth. Vidal pursues her as the rebels launch an attack on the outpost. Ofelia meets the faun at the centre of the labyrinth.

The faun suggests drawing a small amount of the baby’s blood, as completing the third task and opening the portal to the underworld requires the blood of an innocent, but Ofelia refuses to harm her brother. Vidal finds her talking to the faun, whom he cannot see. The faun leaves, and Vidal takes the baby from Ofelia’s arms before shooting her. Vidal returns to the labyrinth’s entrance, where he is surrounded by rebels, including Mercedes and Pedro. Knowing that he will be killed, he hands the baby to Mercedes and asks that she tell his son the exact time of his death. Mercedes refuses, telling him that his son will not even know his name. Pedro then shoots Vidal dead.

Mercedes enters the labyrinth and comforts a motionless but breathing Ofelia. Drops of Ofelia’s blood fall down the centre of the spiral stone staircase onto an altar. Ofelia, well dressed and uninjured, then appears in a golden throne room. The King of the underworld tells her that, by choosing to spill her own blood rather than that of another innocent, she passed the final test. The faun praises Ofelia for her choice, addressing her once more as “Your Highness”. The Queen of the underworld, her mother, invites Ofelia to sit next to her father and rule at his side. Back in the stone labyrinth, Ofelia smiles as she dies in Mercedes’ arms.

The epilogue completes the tale of Princess Moanna, stating that she returned to the Underworld, ruled wisely for many centuries, and left quiet traces of her time in the human realm “visible only to those who know where to look.”