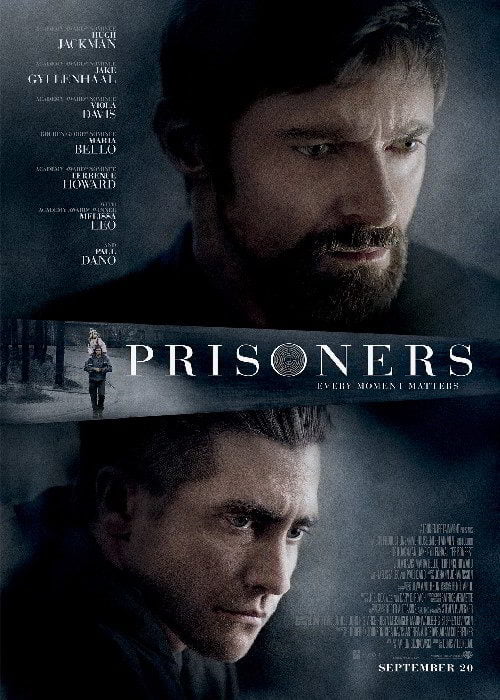 When Keller Dover’s daughter and her friend go missing, he takes matters into his own hands as the police pursue multiple leads and the pressure mounts.

How far would you go to protect your family? Keller Dover is facing every parent’s worst nightmare. His six-year-old daughter, Anna, is missing, together with her young friend, Joy, and as minutes turn to hours, panic sets in. The only lead is a dilapidated RV that had earlier been parked on their street. Heading the investigation, Detective Loki arrests its driver, Alex Jones, but a lack of evidence forces his release. As the police pursue multiple leads and pressure mounts, knowing his child’s life is at stake the frantic Dover decides he has no choice but to take matters into his own hands. But just how far will this desperate father go to protect his family?


In Pennsylvania, Keller Dover, his wife Grace, son Ralph, and daughter Anna celebrate Thanksgiving dinner with their friends Franklin and Nancy Birch and daughters Eliza and Joy. The four children go for a walk and notice a parked RV. After dinner, daughters Anna and Joy go missing. Keller calls the police to report their disappearances. Detective Loki responds, locates the RV at the edge of the woods, and arrests the driver, Alex Jones.

During interrogation, Loki realizes Alex’s diminished IQ prevents him from planning a kidnapping, and that his RV contains no forensic evidence of the missing girls. Loki runs down leads on local pedophiles and finds Father Patrick Dunn, a priest with a corpse in his basement. Dunn admits to killing the man after he confessed to murdering 16 children for his “war on God.”

Loki releases Alex to his aunt Holly. Convinced of Alex’s guilt, Dover assaults him outside the police station. Alex tells Dover that “they didn’t cry until I left them.” When Loki deems the new information inconclusive, Dover kidnaps Alex and begins to torture him in an abandoned apartment building.

At a vigil for the girls, Loki notes a suspicious man in the crowd who subsequently flees. Loki releases a police sketch of the suspect to the local community. That night, the suspect sneaks into the Birch and Dover houses. Grace hears him and calls Loki who learns that Dover spends his nights away from home. He tails Dover to the apartment building, where Dover claims he sleeps to hide his grief and alcoholism from his family. Loki gets a call from a clerk who recognizes the suspect in the sketch. Loki tracks the suspect, Bob Taylor, to his apartment, and finds walls covered in maze drawings and crates filled with snakes and bloody clothes of children.

Loki discovers Taylor was abducted as a child. As Taylor meticulously scribbles maze drawings, Loki assaults him and demands the location of the missing girls. Taylor grabs an officer’s gun and kills himself without revealing their location. The Birches and Dovers view photos of Taylor’s apartment and identify several bloody clothes as Joy’s and Anna’s and conclude the girls are dead. At Taylor’s apartment, Loki realizes many of the clothes are store-bought and are soaked with pig’s blood.

Dover tortures Alex, who cryptically talks about escaping from a maze. Dover visits Alex’s aunt Holly, apologizing for Alex’s disappearance while hiding his own involvement. Holly says Alex’s speech disability comes from a childhood accident involving the snakes her husband kept as pets. While devoutly religious, Holly and her husband lost their faith after their son died of cancer, and adopted Alex as a way to cope.

At the police station, Loki matches the maze pattern in Taylor’s drawings to a necklace worn by the murdered man in Father Dunn’s basement. Joy is found alive and rushed to a hospital. Grilling her for information, Dover hears her mumble: “you were there” and rushes out. Loki gives chase and travels to Dover’s father’s apartment expecting to find Dover but instead finding Alex.

Dover confronts Holly and accuses her of kidnapping the girls. Holly explains that before her husband disappeared, they abducted children as part of their “war on God” to avenge their son’s death and create demons out of the traumatized parents. Alex was their first abduction, Taylor their second. Holding Dover at gunpoint, Holly drugs and imprisons him in a hidden pit in her yard, where he finds an emergency whistle belonging to his daughter.

Loki arrives to inform Holly that Alex has been found and enters her house. A photo of the late husband wearing the same maze necklace as the corpse in Dunn’s basement prompts him to search for Holly who is about to kill Anna. The two exchange gunfire which kills Holly and injures Loki. Loki is able to rush Anna to the hospital in time. Grace thanks Loki, despite the knowledge that Dover will likely go to prison when found. Loki returns to Holly’s house to supervise a forensic excavation. Just after halting work for the night, he faintly hears a whistle blowing.