The Sixth Sense
Next Video 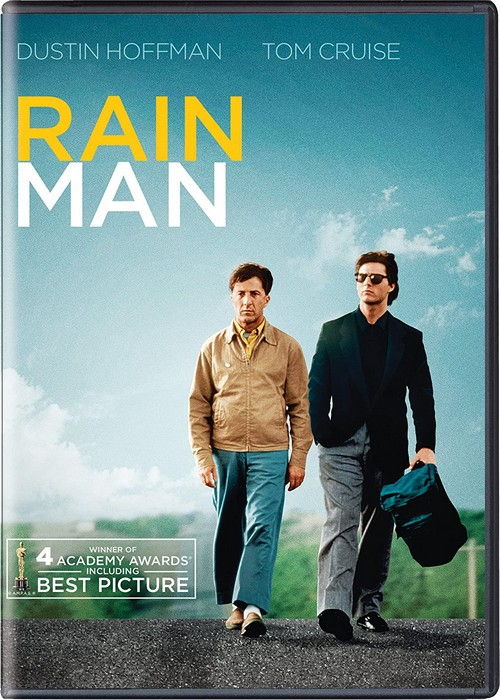 Taglines: A journey through understanding and fellowship.

Selfish yuppie Charlie Babbitt’s father left a fortune to his savant brother Raymond and a pittance to Charlie; they travel cross-country.

Charles Sanford “Charlie” Babbit is a self-centered Los Angeles-based automobile dealer/hustler/bookie who is at war with his own life. Charlie, as a young teenager, used his father’s 1949 Buick convertible without permission and as a result, he went to jail for two days on account that his father reported it stolen. It is then that Charlie learns that his estranged father died and left him from his last will and testament a huge bed of roses and the car while the remainder will of $3 Million goes into a trust fund to be distributed to someone. Charlie seemed pretty angry by this and decides to look into this matter. It seems as if that “someone” is Raymond, Charlie’s unknown brother, an autistic savant who lives in a world of his own, resides at the Walbrook Institute. Charlie then kidnaps Raymond and decides to take him on a lust for life trip to the west coast as a threat to get the $3 Million inheritance. Raymond’s acts and nagging, including repeated talks of “Abbott & Costello”, “Four minutes till Wapner” and refusal to fly on an airline except Quantas drives Charlie insane… and out of his selfish world into a cross-country trek of pure love and understanding that these two both have.


Charlie Babbitt is in the middle of importing four grey market Lamborghinis to Los Angeles for resale. He needs to deliver the vehicles to impatient buyers who have already made down payments in order to repay the loan he took out to buy the cars, but the EPA is holding the cars at the port due to the cars failing emissions regulations. Charlie directs an employee to lie to the buyers while he stalls his creditor.

When Charlie learns that his estranged father has died, he and his girlfriend Susanna travel to Cincinnati, Ohio, in order to settle the estate. He learns he is receiving the classic 1949 Buick Roadmaster convertible which he and his father fought over, but the bulk of the $3 million estate is going to an unnamed trustee. Through social engineering, he learns the money is being directed to a mental institution, where he meets his elder brother, Raymond Babbitt, of whom he was previously unaware.

Raymond is autistic, has savant syndrome, and adheres to strict routines. He has superb recall, but he shows little emotional expression except when in distress. Charlie spirits Raymond out of the mental institution and into a hotel for the night. Susanna becomes upset with the way Charlie treats his brother and leaves. Charlie asks Raymond’s doctor, Dr. Gerald R. Bruner, for half the estate in exchange for Raymond’s return, but he refuses. Charlie decides to attempt to gain custody of his brother in order to get control of the money.

After Raymond refuses to fly back to Los Angeles, they set out on a cross-country road trip together. They make slow progress because Raymond insists on sticking to his routines, which include watching Judge Wapner on television every day and getting to bed by 11:00 PM. He also objects to traveling on the interstate after they pass a bad accident. During the course of the journey, Charlie learns more about Raymond, including that he is a mental calculator with the ability to instantly count hundreds of objects at once, far beyond the normal range of human subitizing abilities. He also learns that Raymond actually lived with the family when Charlie was young and he realizes that the comforting figure from his childhood, whom he falsely remembered as an imaginary friend named “Rain Man”, was actually Raymond. He then figures that Raymond was sent away to the institution after an incident where Raymond was believed to have accidentally nearly injured a young Charlie in a scalding hot bath. Charlie realizes that to the contrary it had been Raymond’s actions which had saved himself from being scalded in that bathtub, but that Raymond had been unable to speak up for himself and undo the wrong caused by the misunderstanding.

After the Lamborghinis are seized by his creditor, Charlie finds himself $80,000 in debt and hatches a plan to return to Las Vegas, which they passed the night before, and win money at blackjack by counting cards. Though the casino bosses are skeptical that anyone can count cards with a six deck shoe, after reviewing security footage they ask Charlie and Raymond to leave. Charlie has made over $86,000 to cover his debts and has reconciled with Susanna who rejoined them in Las Vegas.

Back in Los Angeles, Charlie meets with Dr. Bruner, who offers him $250,000 to walk away from Raymond. Charlie refuses and says that he is no longer upset about what his father left him, but he wants to have a relationship with his brother. At a meeting with a court-appointed psychiatrist, Raymond is shown to be unable to decide for himself what he wants. Charlie stops the questioning and tells Raymond he is happy to have him as his brother.

Charlie takes Raymond to the train station where he boards an Amtrak train with Dr. Bruner to return to the mental institution. Charlie promises Raymond that he will visit in two weeks.