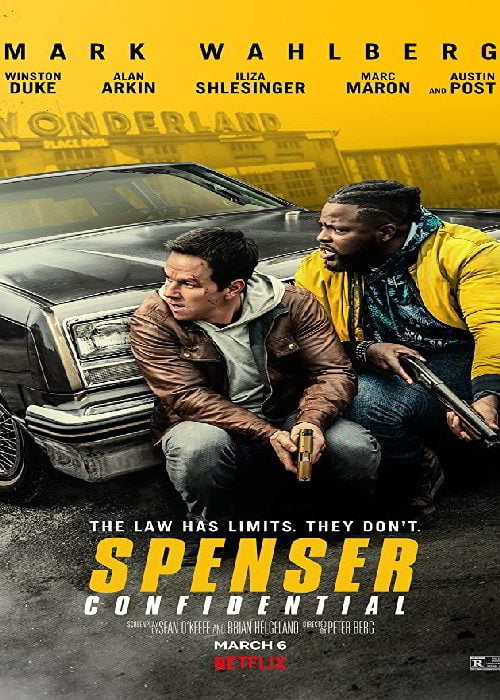 Taglines: The Law Has Limits. They Don’t.

When two Boston police officers are murdered, ex-cop Spenser teams up with his no-nonsense roommate, Hawk, to take down criminals.

Spenser (Mark Wahlberg) – an ex-cop better known for making trouble than solving it – just got out of prison and is leaving Boston for good. But first he gets roped into helping his old boxing coach and mentor, Henry (Alan Arkin), with a promising amateur. That’s Hawk (Winston Duke), a brash, no-nonsense MMA fighter convinced he’ll be a tougher opponent than Spenser ever was. When two of Spenser’s former colleagues turn up murdered, he recruits Hawk and his foul-mouthed ex-girlfriend, Cissy (Iliza Shlesinger), to help him investigate and bring the culprits to justice. From director Peter Berg, SPENSER CONFIDENTIAL is an action-comedy co-starring Bokeem Woodbine, Marc Maron and Austin Post. Inspired by Robert B. Parker’s Wonderland, a best-selling novel by Ace Atkins.

Based on Wonderland by Ace Atkins.


Boston police detective Spenser arrives with his partner, Driscoll, to the home of Captain John Boylan. While questioning Boylan about concerns he had regarding the murder investigation of a woman named Gloria Wiesnewski, Spenser catches sight of Mrs. Boylan’s bloody face and reacts violently, beating Boylan senseless. Spenser is brought up on multiple charges as a result of this incident, to which he pled guilty, and was sentenced to prison for his actions.

During his time incarcerated in MCI Cedar Junction, Spenser studies to become a truck driver and, after five years he is released from prison. Shortly before his release, Spenser is assaulted in the prison library by three fellow inmates in an attempt to warn him to leave Boston and never return. Spenser is met outside the prison by his friend Henry Cimoli, who came to pick him up, though his ex, Cissy, puts in a surprise appearance, and he flees the scene with Henry to avoid her. The duo drive to Cimoli’s residence in South Boston where Spenser is reunited with his former partner, Driscoll, and Spenser’s dog Pearl. Spenser takes up residence in Henry’s home with his roommate, Hawk, while he prepares for his new career and a planned move to Arizona.

At night, Boylan is driving while talking to his daughter over the phone, when he gets a second call summoning him to a mysterious meeting at a bus yard. Boylan continues his conversation with his daughter, helping her with her homework, and upon his arrival at the yard an SUV intentionally collides with his car. Boylan is then dragged from the vehicle by hooded men armed with machetes and murdered, with his daughter a helpless witness via the car’s handsfree mobile phone capability. The next morning, Detective Terrence Graham is discovered dead with a gunshot wound to the head in his SUV (the same SUV used to ram Boylan’s car) by his wife, Letitia, upon her arrival home from work.

Spenser and Henry learn about Boylan’s death on television shortly before Driscoll and his partner arrive at the residence to question him about his possible involvement in the murder given their history and the coincidental timing on the evening of Spenser’s release. Henry provides Spenser with an alibi and cites Hawk as another witness who can verify Spenser’s presence during the time of the murder. Driscoll’s partner expresses his dismay at Driscoll’s easy acceptance of Spenser’s alibi and challenges Spenser, telling him that the District attorney would easily dismiss the alibi if evidence came up to implicate him. Spenser goes to his truck driving class and then meets up with Henry and Hawk at the gym where he agrees to aid Henry with Hawk’s training. Cissy, who has been trying to track Spenser down constantly since his release, shows up and confronts him, only to break up with him. Upon their return home, a news report implicating Detective Graham in Captain Boylan’s murder and the emotional response of his wife Letitia inspires Spenser to investigate the murder due to his past acquaintance with Terrence and his belief that Terrence was unlikely to commit suicide.

Spenser meets up with Letitia and questions her about the night of the murder, before heading to a local police bar where she said Graham had been the night of the murder and meeting with Scotty Traylor, Terrence’s partner. Traylor confirmed Letitia’s story and Spenser’s suspicion that Terrence had suspected Boylan of being dirty. After getting into a brawl with Sergeant Macklin and three other officers and being thrown out of the bar, Spenser gains access to the CCTV footage from the convenience store across the street where he observed Terrence getting into a yellow Corvette while a pair of unknown individuals got into his SUV and followed the Corvette. The next day, Spenser visits the crime scene at the bus yard where he discovers a toothpick on the ground similar to the ones Driscoll often chews on, he then heads to Driscoll’s gym where he asks him about the murder case without mentioning the toothpick, and Driscoll attempts to dissuade him from digging into the case, asserting that it was an open-and-shut case, and denying having even been to the crime scene rousing Spenser’s suspicion.

After lunch with Hawk, and a bathroom encounter with Cissy, Spenser conducts an abortive foot chase of a Corvette similar to the one they saw on the CCTV footage, only to be attacked by a dog. Luckily, Hawk was able to catch the license plate number of the car which a contact of Spenser’s at the RMV traces the ownership back to Charles Bentwood, a name Spenser recognizes from the Wiesnewski case and who has links to the Trinitarios. Spenser, Henry, and Hawk begin surveillance of Bentwood and observe him making a hand off to Macklin where they discover that an FBI team led by Agent Louisa Burton is also surveilling the hand off. A conversation with Hawk leads Spenser to return to MCI Cedar Junction to question Squeeb, one of the men who attacked him just prior to his release, where he’s given a clue that led him to Wonderland Greyhound Park, the site of a future casino development where he’s escorted off of the property.

Driscoll and Macklin have a conversation at Boylan’s funeral about the state of affairs, and decide that killing Spenser is necessary, and a group of thugs armed with machetes attempt to kill him at a local restaurant, only to be rescued by Hawk. Knowing that Henry’s house is no longer safe, Spenser calls Cissy to secure a place for Henry, Hawk, and himself to stay for a few days. In the interim, Letitia’s apartment has been tossed. She calls Spenser for help, and when he shows up she provides him with a recording that Terrence had mailed to her on the day he was killed. The recording, of a meeting between Terrence and Boylan, confirms that Boylan was a dirty cop, that the Trinitarios were doing business with Bentwood, who worked for Macklin, who worked for Driscoll. Spenser confronts Driscoll outside of his house and offers him the chance to turn himself in, which he declines, before bringing the tape to Agent Burton who deems it insufficient evidence to act upon.

Spenser tracks down Bentwood at the nail salon he frequents and violently interrogates him resulting in Bentwood’s confession that there’s a shipment of drugs coming from New Hampshire to Wonderland that very day in a refrigerator repair van. Spenser and Hawk find the van and force it off the road by throwing a sledgehammer off of an overpass, then take down two of the three gang members inside with the third escaping on foot. They uncover the shipment packed inside of gas cylinders in the back, and bring the van back to Cissy’s when Spenser’s reporter contact declares the drugs themselves to be insufficient evidence. Shortly after their arrival, Cissy reveals that Henry had gone home and Spenser gets a video call from Henry’s phone from Driscoll. Driscoll demands a meeting with Spenser, threatening to kill Henry if he doesn’t comply, telling Spenser to meet him at Wonderland in an hour with the drug shipment over Henry’s protests.

Spenser, Hawk, and Cissy resolve to go together and Cissy drives Henry’s car into Wonderland where Driscoll and the Trinitarios are gathered on the track in and around several large SUVs. Cissy escorts him to safety by the infield wall before Spenser and Hawk arrive in a Peterbilt truck and plow through the gang members’ vehicles. Driscoll flees into the race track’s old clubhouse and Spenser pursues him, culminating in a brawl between the two of them that results in Spenser performing a citizen’s arrest making use of Driscoll’s own cuffs to subdue him. They pile all of the drugs and other evidence on the infield and leave Driscoll, Bentwood, and Macklin restrained nearby and streaming the arrival of the police and FBI via a cell phone they left behind on a tripod.

In the aftermath, Terrence Graham is posthumously cleared of all charges and an apology issued to his family, Spenser and Hawk are declared heroes, the casino project funded by the activities of the Trinitarios and the dirty cops is shut down, Boylan and Driscoll are charged in Weisnewski’s murder, and Driscoll is convicted and sent to prison. As the movie closes, Spenser sees a news report at a restaurant reporting on a church fire of two years prior for which a Boston fire chief is under arrest, though he protests his innocence and begs for help. Spenser recognizes him as a man he went to high school with, Henry desperately demands that someone change the channel while Cissy attempts to forbid him from getting involved as Spenser says nothing, with the implication that he’s turning things over in his mind.