Into the Wild
Next Video 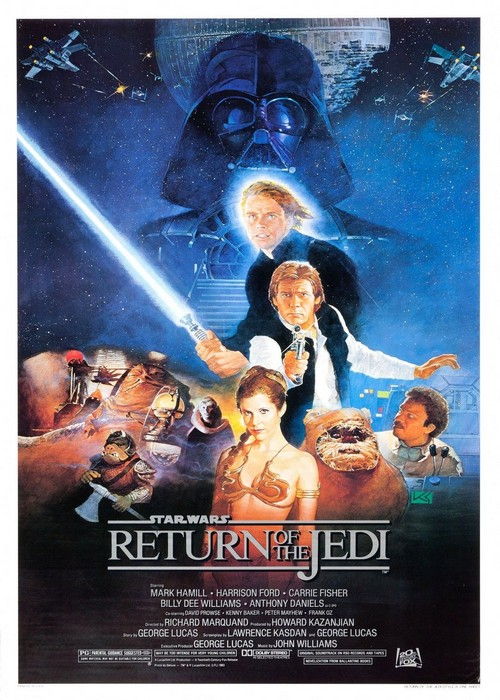 After a daring mission to rescue Han Solo from Jabba the Hutt, the Rebels dispatch to Endor to destroy the second Death Star. Meanwhile, Luke struggles to help Darth Vader back from the dark side without falling into the Emperor’s trap.

Luke Skywalker battles Jabba the Hutt and Darth Vader to save his comrades in the Rebel Alliance and triumph over the Galactic Empire. Han Solo and Princess Leia reaffirm their love, and team with Chewbacca, Lando Calrissian, the Ewoks, and droids C-3PO and R2-D2 to aid in the disruption of the Dark Side, and the defeat of the evil emperor.


C-3PO and R2-D2 are sent to crime lord Jabba the Hutt’s palace on Tatooine in a trade bargain made by Luke Skywalker to rescue Han Solo. Disguised as a bounty hunter, Princess Leia infiltrates the palace under the pretense of collecting the bounty on Chewbacca and unfreezes Han, but is caught and enslaved. Luke soon arrives to bargain for his friends’ release, but Jabba drops him through a trapdoor to be executed by a rancor. After Luke kills the rancor, Jabba sentences him, Han, and Chewbacca to death by being fed to the Sarlacc, a huge, carnivorous plant-like desert beast. Having hidden his new lightsaber inside R2-D2, Luke frees himself and battles Jabba’s guards while Leia uses her chains to strangle Jabba to death. As the others rendezvous with the Rebel Alliance, Luke returns to Dagobah to complete his training with Yoda, whom he finds is dying. Yoda confirms that Darth Vader, once known as Anakin Skywalker, is Luke’s father, and becomes one with the Force. The Force ghost of Obi-Wan Kenobi reveals that Leia is Luke’s twin sister, and tells Luke that he must face Vader again to finish his training and defeat the Empire.

The Rebel Alliance learns that the Empire has been constructing a second Death Star under the supervision of the Emperor himself. As the station is protected by an energy shield, Han leads a strike team to destroy the shield generator on the forest moon of Endor; doing so would allow a squadron of starfighters to destroy the Death Star. Luke and Leia accompany the strike team to Endor in a stolen Imperial shuttle. Luke and his companions encounter a tribe of Ewoks and, after an initial conflict, gain their trust. Later, Luke tells Leia that she is his sister, Vader is their father, and that he must confront him. Surrendering to Imperial troops, he is brought before Vader, and fails to convince his father to reject the dark side of the Force.

Vader takes Luke to the Death Star to meet the Emperor, intending to turn him to the dark side. The Emperor reveals that the Imperial forces are prepared for a Rebel assault on the shield generator and that the Rebel Fleet will fall into a trap. On the forest moon of Endor, Han’s team is captured by Imperial forces, but a counterattack by the Ewoks allow the Rebels to infiltrate the shield generator. Meanwhile, Lando Calrissian in the Millennium Falcon and Admiral Ackbar lead the rebel assault on the second Death Star only to find that the Death Star’s shield is still active, and the Imperial fleet waits for them.

The Emperor reveals to Luke that the Death Star is fully operational and orders the firing of its massive superlaser, destroying one of the Rebel starships. The Emperor tempts Luke to give in to his anger. Luke attacks him, but Vader intervenes and the two engage in another lightsaber duel. Vader senses that Luke has a sister and threatens to turn her to the dark side. Enraged, Luke severs Vader’s prosthetic hand. The Emperor entreats Luke to kill Vader and take his place, but Luke refuses, declaring himself a Jedi like his father before him. Furious, the Emperor tortures Luke with Force lightning. Unwilling to let his son die, Vader throws the Emperor down a reactor shaft to his death but is mortally electrocuted in the process. At his father’s last request, Luke removes Vader’s mask, and the redeemed Anakin Skywalker dies in his son’s arms.

After the strike team destroys the shield generator, Lando leads a group of Rebel fighters into the Death Star’s core. While the Rebel fleet destroys the Super Star Destroyer Executor, Lando and X-wing fighter pilot Wedge Antilles destroy the Death Star’s main reactor. As the Falcon escapes the Death Star’s superstructure and Luke escapes on a shuttle with his father’s body, the station explodes. On the Forest Moon of Endor, Leia reveals to Han that Luke is her brother, and she and Han kiss. Luke cremates his father’s body on a pyre before reuniting with his friends. As the Rebels and the galaxy celebrate the fall of the Empire, Luke sees the spirits of Yoda, Obi-Wan, and Anakin watching over him.