The Martian
Next Video 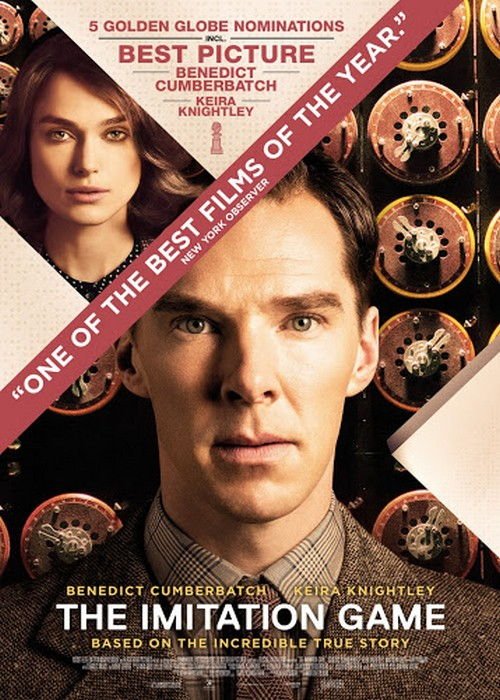 Based on Alan Turing: The Enigma by Andrew Hodges.

The plot of the film takes the viewer to the UK in 1939. There is World War II, the British intelligence services are working day and night, but the Germans have the opportunity to exchange information with each other using the Enigma encryption machine.

The government is recruiting Alan Turing – an outstanding talented mathematician, logic and cryptographer with analytical thinking. Alan and his team face an incredibly difficult task – to crack the code of German encryption technology, which only a real genius can do. The difficult relations and friction between the members of the secret government laboratory impede the achievement of the goal, but gradually the situation stabilizes. Turing concludes that only another similar device can handle the Enigma and plunges into work on the decoder.

The mathematician was able to fulfill his great mission, according to analysts, his discovery brought closer the victory over Nazi Germany for 2 years, but brought severe suffering to its creator. Representatives of the government decide to get rid of the scientist that has become unnecessary, he is accused of homosexuality and is tried. In 1954, a man who saved millions of human lives commits suicide.


In 1951, two policemen, Nock and Staehl, investigate the mathematician Alan Turing after an apparent break-in at his home. During his interrogation by Nock, Turing tells of his time working at Bletchley Park during the Second World War.

In 1928, the young Turing is unhappy and bullied at boarding school. He develops a friendship with Christopher Morcom, who sparks his interest in cryptography. Turing develops romantic feelings for him, but Christopher soon dies from bovine tuberculosis.

When Britain declares war on Germany in 1939, Turing travels to Bletchley Park. Under the direction of Commander Alastair Denniston, he joins the cryptography team of Hugh Alexander, John Cairncross, Peter Hilton, Keith Furman and Charles Richards. The team are trying to analyze the Enigma machine, which the Nazis use to send coded messages.

Turing is difficult to work with, and considers his colleagues inferior; he works alone to design a machine to decipher Enigma messages. After Denniston refuses to fund construction of the machine, Turing writes to Prime Minister Winston Churchill, who puts Turing in charge of the team and funds the machine. Turing fires Furman and Richards and places a difficult crossword in newspapers to find replacements. Joan Clarke, a Cambridge graduate, passes Turing’s test but her parents will not allow her to work with the male cryptographers. Turing arranges for her to live and work with the female clerks who intercept the messages, and shares his plans with her. With Clarke’s help, Turing warms to the other colleagues, who begin to respect him.

Turing’s machine, which he names Christopher, is constructed, but cannot determine the Enigma encryption settings quickly enough; the Germans reset them each day. Denniston orders it to be destroyed and Turing fired, but the other cryptographers threaten to leave if Turing goes. After Clarke plans to leave on the wishes of her parents, Turing proposes marriage, which she accepts. During their reception, Turing confirms his homosexuality to Cairncross, who warns him to keep it secret. After overhearing a conversation with a female clerk about messages she receives, Turing has an epiphany, realising he can program the machine to decode words he already knows exist in certain messages. After he recalibrates the machine, it quickly decodes a message and the cryptographers celebrate. Turing realises they cannot act on every decoded message or the Germans will realise Enigma has been broken.

Turing discovers that Cairncross is a Soviet spy. When Turing confronts him, Cairncross argues that the Soviets are allies working for the same goals, and threatens to retaliate by disclosing Turing’s sexuality. When the MI6 agent Stewart Menzies appears to threaten Clarke, Turing reveals that Cairncross is a spy. Menzies reveals he knew this already and planted the messages Cairncross leaks to the Soviets for British benefit. Fearing for her safety, Turing tells Clarke to leave Bletchley Park, revealing that he is a homosexual. Clarke states she always suspected but insists they would have been happy together anyway. Turing then tells her he never cared for her, and only used her for her cryptography skills. Heartbroken, she decides to stay anyway, deeming this the single most important task she’ll undertake, and she now refuses to cow to what Turing or her parents want her to do, or think of her decisions. After the war, Menzies tells the cryptographers to destroy their work and that they can never see one another again or share what they have done.

In the 1950s, Turing is convicted of gross indecency and, in lieu of a jail sentence, undergoes chemical castration so he can continue his work. Clarke visits him in his home and witnesses his physical and mental deterioration. She comforts him by saying that his work saved millions of lives.

The final scene shows an on screen message saying, “After a year of government-mandated hormonal therapy, Turing committed suicide on June 7th, 1954. He was 41 years old. Between 1885 and 1967, approximately 49,000 homosexual men were convicted of gross indecency under British law. In 2013, Queen Elizabeth II granted Turing a posthumous Royal Pardon, honoring his unprecedented achievements. Historians estimate that breaking Enigma shortened the war by more than two years, saving over 14 million lives. It remained a government-held secret for more than 50 years. Turing’s work inspired generations of research into what scientists called “Turing Machines”. Today, we call them computers.”