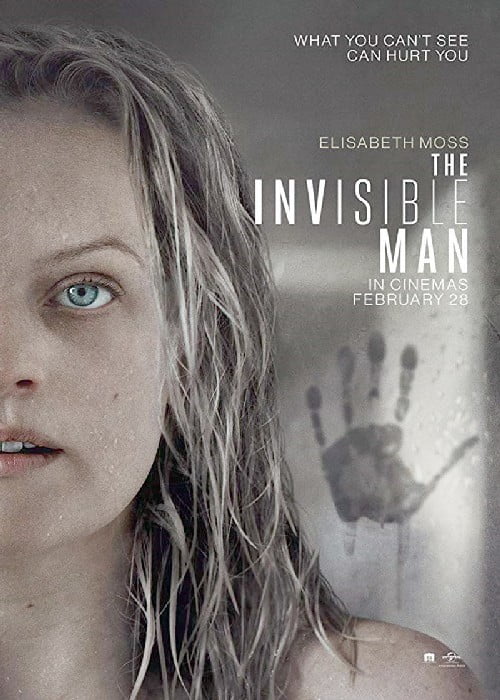 Taglines: What You Can’t See Can Hurt You.

When Cecilia’s abusive ex takes his own life and leaves her his fortune, she suspects his death was a hoax. As a series of coincidences turn lethal, Cecilia works to prove that she is being hunted by someone nobody can see.

The film follows Cecilia, who receives the news of her abusive ex-boyfriend’s suicide. She begins to re-build her life for the better. However, her sense of reality is put into question when she begins to suspect her deceased lover is not actually dead.

Based on Characters and concepts created by H. G. Wells for The Invisible Man.


Trapped in a violent, controlling relationship with wealthy optics engineer and businessman Adrian Griffin, Cecilia Kass drugs him with diazepam one night, and escapes his home with the help of her sister Emily.

Cecilia hides out with childhood friend Detective James Lanier and his teenage daughter Sydney. Two weeks after Cecilia’s escape, Adrian seemingly commits suicide and leaves her $5 million in his will, handled by his lawyer brother Tom. Cecilia suspects another presence in the house after several strange events and calls for James but he assures her she is just traumatized. During a job interview, she faints after finding her work portfolio’s contents removed. The doctor says they found high levels of diazepam in her system. In her bathroom she finds the same bottle from which she drugged Adrian (but dropped during her escape).

Cecilia arranges a meeting with Tom and James, insisting that Adrian faked his death and used his optics expertise to become invisible in order to torment her, but gets rebuffed. Sydney is hit by an unseen force, and she and James assume Cecilia did it; she tries a number of tactics to catch the figure. After finding Adrian’s old phone and covering the figure with paint, she ends up in a violent struggle before escaping to Adrian’s home to investigate. In his lab she finds a suit that confirms her suspicions. The invisible figure attacks again so she flees and contacts Emily. The pair meet in a restaurant, but the invisible figure slits Emily’s throat and places the knife in Cecilia’s hand, framing her for the crime.

Cecilia is remanded to a mental hospital while she awaits her trial, and there a staffer informs her that she is pregnant. Tom offers to get her charges dropped if she agrees to “return to him” and raise the child, implying that he helped his brother stage his suicide and revealing Adrian tampered with her birth control to ensure she became pregnant. Cecilia refuses and steals a pen from his briefcase. That night, she uses the pen to pretend to commit suicide to summon the invisible figure. When the figure tries to stop her, she stabs him repeatedly, causing the suit to malfunction. The security team arrives but the figure incapacitates them before fleeing the hospital with Cecilia in pursuit. Not wanting to harm her because of her pregnancy, the figure instead threatens to attack those she loves.

Cecilia races to James’ house, where she finds the figure attacking him and Sydney. She manages to shoot the figure to death but when she unmasks it, it is Tom in the suit. Police find a captive Adrian alive at his house, tied up and claiming Tom held him prisoner. Cecilia disputes this, insisting the brothers must have shared the suit, with Adrian sending Tom to the house knowing what would happen.

In an attempt to get Adrian to confess, she meets him at his house while James listens on a wire. She agrees to mend their relationship but only if he confesses to being the figure. Adrian insists Tom did kidnap him and claims that the experience changed his outlook on life and how he treated her. When she cries, Adrian alludes to his abuse, using similar phrasing to that of the figure. Smiling, Cecilia departs to use the restroom. Moments later, the security camera captures Adrian seemingly committing suicide. Cecilia returns and apparently distraught, calls the police. Out of the camera’s sight, however, she taunts Adrian during his final living moments, having retrieved the spare suit she had hidden in the house to kill him.

When James arrives, she confirms what the camera saw. He spots the suit in her bag but allows her to leave. Relieved that she’s finally free of Adrian, Cecilia leaves with the suit.