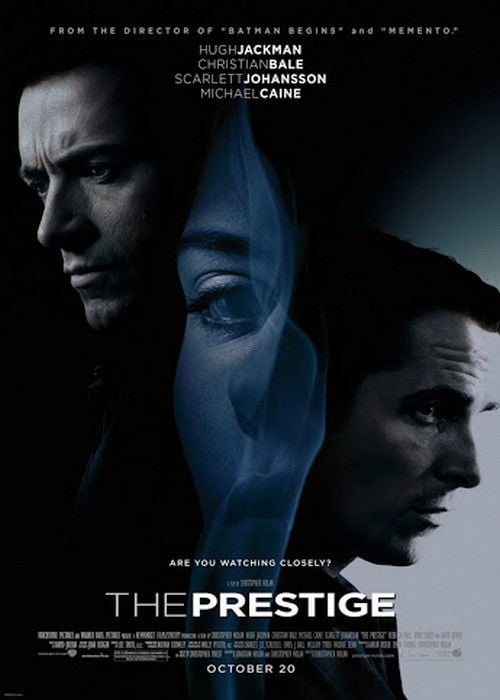 Taglines: A Rivalry That Turned Deadly.

Based on The Prestige by Christopher Priest.

After a tragic accident, two stage magicians engage in a battle to create the ultimate illusion while sacrificing everything they have to outwit each other.

The dramatic movie “The Prestige” is an adaptation of Christopher Priest’s science fiction novel of the same name. The film takes place in London, at the turn of the XIX and XX centuries. The plot focuses on the confrontation between two illusionists – Robert Angier and Alfred Borden, who were once friends. Once they both worked under the guidance of a very famous illusionist, and dreamed of their own glory. But after Angier’s wife dies during one of the performances, enmity begins between them. Since that time, they have been doing everything possible to annoy each other.

Prestige is one of the three stages of focus, which is the last and most basic. This is when the object that disappeared during the number, regardless of what it is, returns. In this final phase, the whole secret of focus lies. So Anger and Borden are doing everything possible to ensure that the prestige of the enemy fails completely.


In 1890s London, Robert Angier and Alfred Borden work as shills for a magician, under the mentorship of John Cutter, an engineer who designs stage magic (a job termed ingenieur in the film). At Cutter’s urging the two aspiring magicians watch a Chinese conjuror (a character inspired by the real-life magician Ching Ling Foo) whose famous trick is to produce a large water-filled fishbowl with fish in it. After the performance, as they watch the old man hobble in his frail state into a carriage Borden explains to Angier that no one can detect the method because the Chinese magician’s real trick was to appear weak and feeble at all times off-stage to conceal that he had the immense physical strength needed to perform the illusion. During a water tank trick, Angier’s wife Julia fails to escape and drowns. The devastated Angier holds Borden responsible for using a riskier rope knot than they normally used in the performance, thereby causing her death. At Julia’s funeral, Borden denies knowing which knot he had tied and the two men become bitter enemies.

Angier and Borden launch their own separate magic careers, with Cutter working for Angier. Borden unveils a trick he developed called the Transported Man, in which he appears to travel instantly between two wardrobes on opposite ends of the stage. As he is unable to discern Borden’s method, Angier hires a double in the form of unemployed actor Gerald Root, in order to perform his own version of the trick. The imitation of Borden’s illusion is a greater success thanks to Angier’s superior showmanship, but Angier is dissatisfied as he ends the trick hidden under the stage while Root basks in the applause of the crowd. Angier pressures his assistant Olivia to spy on Borden to learn how he performs the Transported Man. However, Olivia falls in love with Borden and becomes his assistant and mistress. With her help, Borden sabotages Angier’s act. Confronted by Angier, Olivia gives him a copy of Borden’s encoded diary. Angier acquires the keyword to decode it by abducting and threatening to kill Borden’s ingenieur Bernard Fallon; the keyword is “TESLA”.

The diary takes Angier back to his native America to meet scientist Nikola Tesla. Angier believes Tesla built a transporting machine for Borden, although he later learns the diary is a fiction, planted by Borden through Olivia as a distraction. Tesla does however successfully build a working machine for Angier. Unexpectedly for all concerned, instead of teleporting objects Tesla’s machine duplicates anything placed inside it a short distance away. Tesla is driven out of Colorado Springs by agents of his rival Thomas Edison, but has the machine delivered to Angier. Despite having now adjusted the machine to achieve some version of teleportation, Tesla advises Angier to destroy it, saying it will bring him nothing but misery.

Borden’s wife Sarah is driven to suicide by his contradictory personality and continual secrecy in their marriage. Afterwards, Borden tells Olivia that he never loved Sarah and that he loves her more. Unsettled by Borden’s apparent callousness and tired of his and Angier’s feud, Olivia leaves Borden. In London, Angier debuts his new illusion, The Real Transported Man, to great success, seemingly using Tesla’s machine to teleport across the theater each night. Perplexed by the new trick and obsessed with discovering how Angier does it, Borden sneaks backstage one night, only to witness Angier fall through a trapdoor and drown in a water tank, just as Julia did. Borden is discovered by Cutter and turned over to the police. Unable to prove his innocence in court, Borden is found guilty of murder and sentenced to death by hanging.

Borden is visited in prison by a Lord Caldlow, accompanied by Borden’s daughter Jess. Lord Caldlow (a member of the landed gentry who, off-screen during the trial, has been buying the late Angier’s magical apparatus as well as pursuing Borden’s trick methods via his lawyer) is now revealed to be Angier himself, who had been posing as an American under an alias for his entire performing career. In exchange for his secrets (including how he performed the Transported Man), Borden pleads with Angier to let his daughter go, but Angier is no longer interested and leaves with Jess as his ward. When Cutter contrives to meet Lord Caldlow and discovers that Angier is still alive, he is disgusted at Angier’s plan to frame and kill Borden and steal his daughter, but still agrees to help dispose of Tesla’s machine. That night, Borden is executed for Angier’s murder.

Angier returns to the theater with Cutter, who ponders the agony of drowning while looking at several water tanks that Angier has stored there. Cutter leaves, acknowledging a stranger in the street who then enters and shoots Angier; it is Alfred Borden returned back from the dead. Angier discovers that “Alfred Borden” was an identity shared by identical twins. The brothers performed the original Transported Man together; in life, when one was “Alfred Borden”, the other was disguised as “Bernard Fallon” and the brothers used the performances of the trick itself to swap between both of these identities. The surviving twin loved Sarah while his brother had loved Olivia; but now understood that the life the twins had chosen was never going to be enough for either of the two women.

Borden laments that everything Angier did was for nothing, but Angier denies this, saying that witnessing the audience’s amazement had been the goal all along. Angier dies, smashing his lantern and setting the theater ablaze. Borden leaves to pick up Jess at Cutter’s workshop, but as he leaves he discovers Angier’s sacrifice and the lengths he had gone to; while waiting each night for Borden to enter his trap in the performance, a duplicate Angier would be teleported into the wings by Tesla’s machine, while its predecessor would fall through the trapdoor and drown in a tank beneath the stage – the multiple water tanks all hold corpses of dead Angiers.