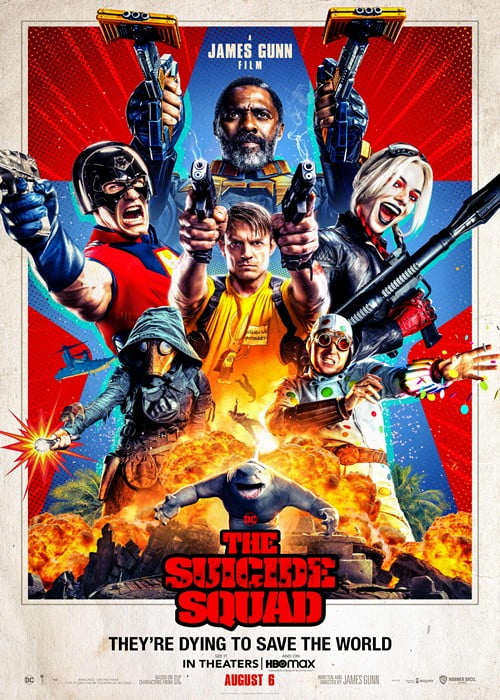 Supervillains Harley Quinn, Bloodsport, Peacemaker and a collection of nutty cons at Belle Reve prison join the super-secret, super-shady Task Force X as they are dropped off at the remote, enemy-infused island of Corto Maltese.

Intelligence officer Amanda Waller sends two Task Force X teams led by Colonel Rick Flag and Bloodsport to the South American island nation of Corto Maltese after its government is overthrown by an anti-American regime. In exchange for lighter sentences, the Belle Reve penitentiary inmates who comprise the squads are tasked with destroying the Nazi-era laboratory Jötunheim, which holds a secretive experiment known as “Project Starfish”. Flag’s team is ambushed by Corto Maltese military, resulting in the deaths of Savant, Captain Boomerang, Blackguard, T.D.K., Javelin, and Mongal, and the capture of Harley Quinn. Weasel apparently drowns and Flag is found by rebel soldiers. This distraction allows Bloodsport and his team of Peacemaker, King Shark, Polka-Dot Man, and Ratcatcher 2 to enter the country undetected. They find Flag at a rebel camp and convince rebellion leader Sol Soria to assist them.

In the Corto Maltese capital, the squad captures the Thinker, a metahuman scientist in charge of Project Starfish. They are joined by Harley when she escapes from the Corto Maltese government after learning of the new regime’s plans to use Project Starfish against other nations. The squad uses the Thinker to break into Jötunheim. Most of the squad rigs the facility with explosives as Flag and Ratcatcher 2 enter the underground laboratory with the Thinker. The two discover Project Starfish is Starro the Conqueror, a giant alien starfish that can remotely control others through smaller versions of itself. The Thinker reveals that Starro was brought to Earth by the American government, who have been secretly funding the experiments on him in Corto Maltese for the past thirty years, using thousands of its citizens as test subjects. An enraged Flag decides to leak a hard drive containing evidence of this revelation, but is killed by Peacemaker who is under secret orders from Waller to cover up America’s involvement in the experiments. Meanwhile, a skirmish between the squad and the Corto Maltese military leads to Polka-Dot Man accidentally setting off the explosives prematurely. As the facility falls apart, Peacemaker attempts to execute Ratcatcher 2 for knowing the truth about Starro, but Bloodsport shoots him and takes the drive.

Starro escapes the destroyed laboratory, kills the Thinker and much of the military, and begins taking control of the island’s population. With the laboratory destroyed, Waller tells the squad that their mission is complete but Bloodsport decides to lead his teammates in battling Starro. Waller attempts to execute the squad for not following her orders, but is knocked out by her subordinates. Polka-Dot Man is killed, but Harley pierces a hole in the alien’s eye and Ratcatcher 2 summons the city’s rats to chew Starro to death from the inside. With the military diverted, Soria takes control of the government and pledges democratic elections. Using the drive as leverage, Bloodsport forces Waller to release him and his surviving teammates from their imprisonment in exchange for keeping its contents confidential, and they are airlifted out of Corto Maltese.