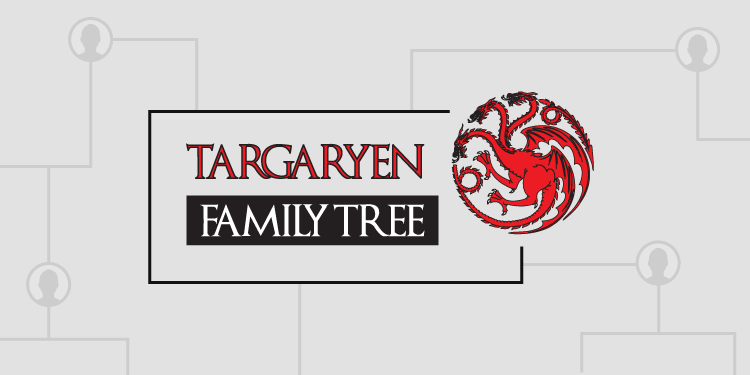 Like the Starks, the Targaryens are one of the most crucial families in the lore of Game of Thrones. They also happen to be the most cunning and terrifying, especially with their history of raising dragons! That being said, most fans are only vaguely aware of the huge family tree that the Targaryen clan represents, since there are very few of them left by the time show starts.

So if like most people, you only really know of Daenerys Targaryen, her crazy brother and her even crazier father, here’s a rundown of the most recent members of the Targaryen family tree (inspired by poly-m). 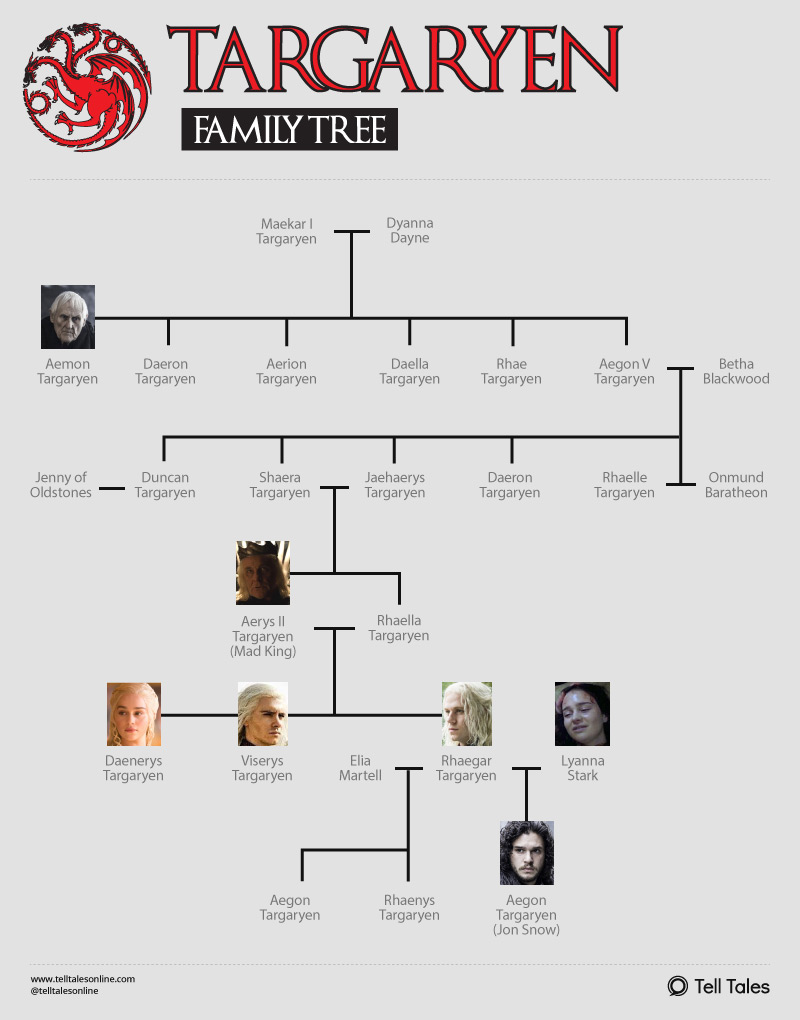 What’s the earliest history of the Targaryen dynasty?

The Targaryens arrived in Westeros after their original home on the continent of Essos was destroyed by a cataclysmic event, the Doom of Valyria.

With the family tree spanning across 16 generations, it’s difficult to explore every family member but one that started it all was King Aegon I Targaryen. Also known as Aegon the Conqueror, as explained in our GoT timeline, he was the first to unite and conquer the kingdoms of Westeros with the help of his 3 dragons.

We could go back very, very far in Game of Thrones history, but unlike the Targaryens, we’re not that ambitious. So, we’ll begin with Aemon Targaryen, the oldest Targaryen we’ve ever met on the show, all the way down to Jon, whom we now know is a Targaryen heir.

First we have Aemon Targaryen, whom we see in the flesh, in his very old age, across the first few seasons of the show. Having served as a Night’s Watch maester for years, people simply forgot he was even a Targaryen. 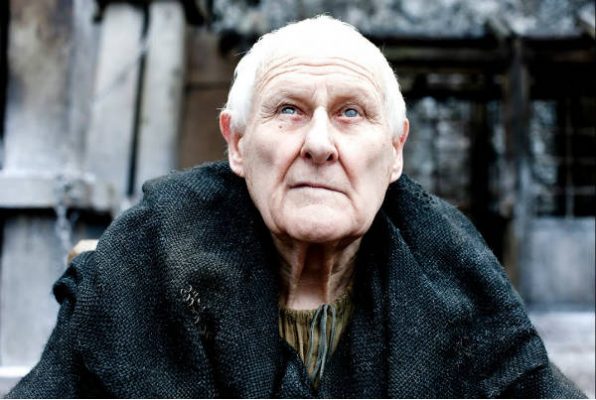 He is the grand-uncle of Aerys II Targaryen, Daenerys’ father, who most viewers know as the Mad King. In his younger days, Aemon was offered the throne but refused it, and it went to his brother Aegon V, who then birthed more children than one can count.

Aegon was the fourth son of Maekar I. He is Aerys II’s grandfather and therefore Dany’s great-grandfather.

Aegon, nicknamed “Egg”, took the throne despite all odds and became the fifteenth Targaryen king to rule the Seven Kingdoms. In addition to being a fairly good king, Aegon V was one of the few sane minds in his family – he believed that incestuous marriages were not the best option (no, really?) and for this reason, had most of his children betrothed to non-relatives.

Unfortunately, a series of unfortunate events led one of his children, Jaehaerys to get it on with his sister, Shaera, and the latter had two children: Aerys II (The Mad King) and Rhaella, who would also get married to each other.

Yeah, we also think Aegon V might have had a good hunch when he thought incestuous relationships weren’t a good idea, but this next part of the tree should speak for itself.

Aerys II, or the Mad King

Skipping his incestuous parents, we have Aerys II. He is one of the most well-known names in GoT, not only because he’s the father (and grandfather, yes we can say that now) of the Targaryens that we know best, but also because his antics were the root of most bloodshed that would begin with Robert’s Rebellion and spill throughout the entire series.

Married to his sister Rhaella, Aerys started off as a promising king who seemed to do right by his subjects and kingdom. Unfortunately, many sorrowful events such as stillborn children, miscarriages, and political troubles including being kidnapped and probably tortured by a rebelling lord, led him to lose his mind for good. 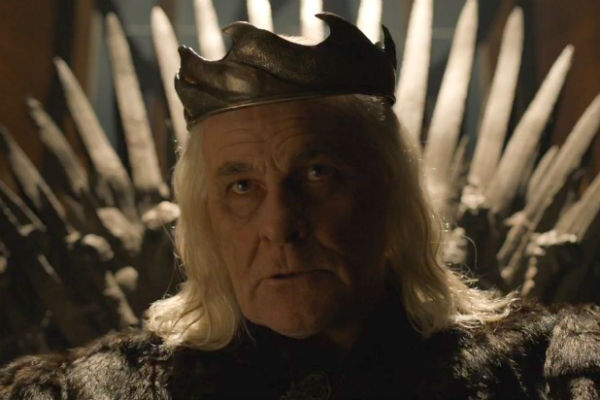 In the latter years of his reign, Aerys became completely unhinged, paranoid, and cruel. Among many others, he had Rickard Stark, father of Eddard Stark, and his oldest son Brandon, killed when the latter came to ask for justice after Lyanna Stark was allegedly kidnapped by Aerys’ son, Rhaegar. Although it was actually a consensual lovers gateway so, you know…the irony.

Then, as most of us know, Aerys was eventually killed by a member of his own guard, Sir Jaime Lannister, thus putting an end to the Targaryen ruling.

Rhaegar Targaryen was the firstborn son of Aerys II, a dashing silver-haired knight who ravished the hearts of all the ladies in Westeros. But it wouldn’t be Game of Thrones if he didn’t ravish the wrong one.

Although married to Elia Martell, Rhaegar truly loved Lyanna Stark, sister of Eddard Stark and wife of Robert Baratheon. Together, the lovebirds left everything behind to get married in secret, leaving everyone to believe that Rhaegar had kidnapped her. This, of course, led to an entire war that was actually built on a lie. 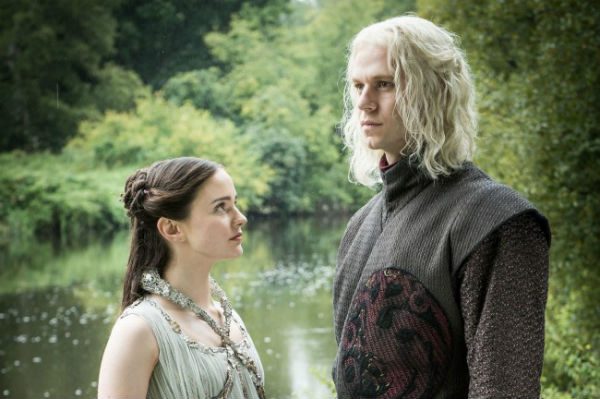 Rhaegar was killed in combat by Robert Baratheon during the Battle of the Trident, while Lyanna died as she gave birth to their son, Aegon Targaryen (Jon Snow, yes we can say it now!). Shortly before her death, Lyanna asked Eddard to protect her son, which he did by raising him as his bastard son, Jon Snow, rather than the royal heir he truly was.

Wife of Rhaegar, Elia Martell was raped and killed by Sir Gregor Clegane during the Sack of King’s Landing, along with the two children she had with Rhaegar, making Jon Snow the last Targaryen heir.

Viserys was the second born son of Aerys II. He was an ambitious but cruel young man who practically raised his younger sister, Daenerys, though definitely not in a healthy way. Exiled with his sister from the Seven Kingdoms after the overthrow of their father, Aerys, the siblings grew up in hiding, and Viserys, determined to get on the Iron Throne, made Dany’s childhood a living hell by abusing her. 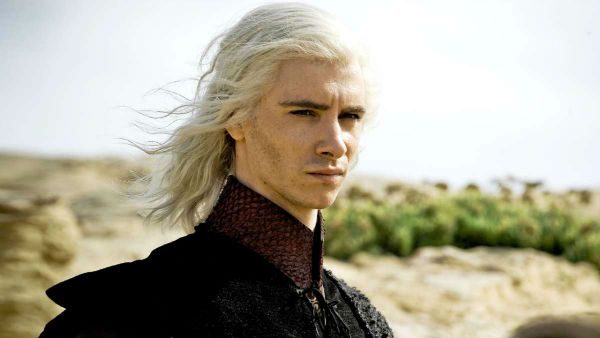 After having practically sold his sister to the warlord, Khal Drogo in order to acquire the allegiance of his people, Viserys began to realize that it was actually Dany who was suddenly getting the royal treatment he so wanted. This drove him to madness and during one of his fits of rage, Khal Drogo poured a crown of melting gold on his head, killing him in front of his very own sister.

Daenerys Targaryen is the youngest daughter of Aerys II. She was born in exile at the end of Robert’s Rebellion, during a great storm, earning herself the nickname of “Daenerys Stormborn”.

Afterwards, Dany and her brother grew up away from prying eyes, though she was abused and treated like cattle by her brother, who only saw her as an opportunity to gain allies in his quest for the throne. 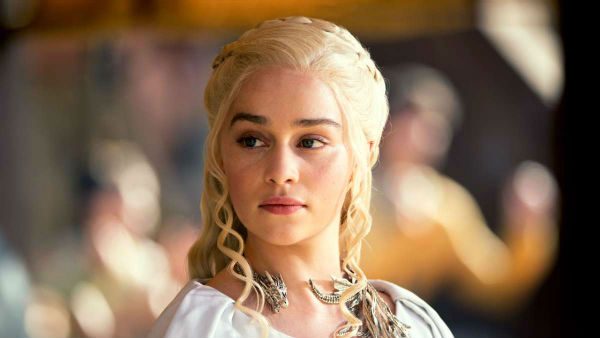 After marrying Khal Drogo and seeing her brother die, Daenerys gained in confidence and soon became mistress of her own fate. With actual dragons by her side, Dany soon became the ‘Mother of Dragons’ which turned her into even more of a badass. Determined to get the throne, Dany cruised across the continent, freed people, gained an army and more allies than she could count.

Dany made her way to Westeros and seduced none other than… Jon Snow. Who was also her nephew (read an explanation of how they’re related). At this point, nothing less surprising.

But following the death of her two dragons, her advisor, Jorah Mormont and dear friend, Missandei, as well as Jon Snow’s threat to the Throne, Daenerys was driven to madness, like her father. The once-was savior burnt down King’s Landing, killing many innocent lives as well as Queen Cersei’s, and Dany was finally ready to steal the throne. Her story soon came to an end when her lover, Jon, killed her in order to protect the Seven Kingdoms.

What happened to Daenerys’ mother?

Indeed, no one really speaks of Dany’s mother, considering her father took most of the limelight throughout GoT history. But apparently, the Mad King’s wife died after suffering complications from Daenerys’ birth.

Jon Snow was born during Robert’s Rebellion and subsequently raised as the bastard son of Lord Eddard Stark in Winterfell, alongside the Stark children that he considered his siblings. Eddard never told him anything about his mother, leading him and everyone else to believe that she was a mere commoner. 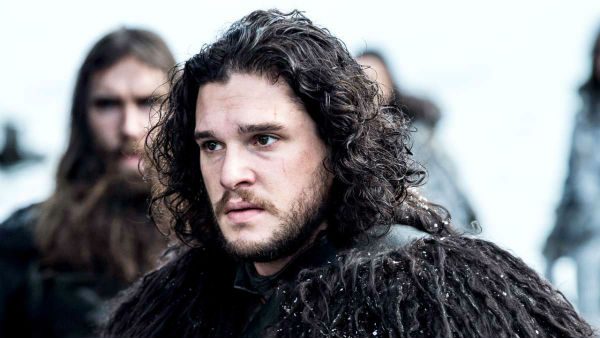 The major part of Jon’s journey happens as he fulfils his duty as a Night’s Watch guard, where he gains the confidence to go from a self-doubting bastard son to a fierce commander.

Jon Snow’s true lineage was heavily hinted at throughout the show, but it was only confirmed in the final episode of season 7. His brother (and actually his cousin), Bran Stark realized that Rhaegar secretly wed Lyanna, making their son a legitimate heir to the Iron Throne.

There you have it, a concise family tree including the most recent members of the Targaryen clan.

Let us know in the comments what details about the Targaryen family you think were also worth mentioning, as well as any theory you might have about this cunning family!