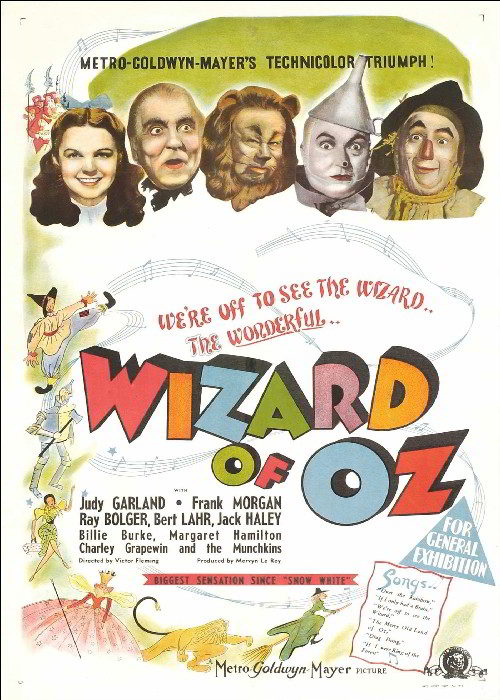 We meet a little girl who, in some incredible way, falls into the most terrible hurricane and finds herself in a fairy-tale country under the strange name of Oz. It turns out that in addition to the world of people that is familiar to us, there is another universe full of miracles and magic. Having set off on a journey, the young traveler meets the Iron tin man, who dreams of finding a heart, a cowardly lion who has not been able to find courage for many years, and the scarecrow who wants to find mind.

Who could know that soon the paths of the heroes unite, becoming the reason for an amazing story, full of intrigue and discovery. Enchanted forests await us, full of evil witches and good fairies. Only the most staunch travelers can survive in these harsh conditions. If you still manage to get through these jungles and swamps, but accept our congratulations, because you are in the Emerald City itself. Here, all dreams become reality, you just have to try a little and really want it.

Dorothy Gale is swept away from a farm in Kansas to a magical land of Oz in a tornado and embarks on a quest with her new friends to see the Wizard who can help her return home to Kansas and help her friends as well.

Based on The Wonderful Wizard of Oz by L. Frank Baum


Dorothy Gale lives with her dog Toto on a Kansas farm belonging to her Aunt Em and Uncle Henry. Although she leads a good life with her aunt and uncle, along with the hard-working farmhands who all care for her, Dorothy feels trapped and stifled on the farm and wants to escape, as she sings “Somewhere Over The Rainbow.” Shortly after, shrewish neighbor Miss Almira Gulch arrives at the Gale farm on her bicycle, declaring she had been bitten by Dorothy’s dog, Toto. She has obtained an order from the sheriff to euthanize him. In spite of Dorothy’s pleas and Aunt Em’s resistance, Miss Gulch takes Toto away but he escapes and returns to Dorothy; she decides to run away in order to ensure that Toto won’t be euthanized. Not far from the farm, she meets Professor Marvel, a fortune teller who uses his crystal ball to make Dorothy believe that Aunt Em may be dying of a broken heart. Horrified, Dorothy rushes home as a storm approaches; a tornado forms, and Aunt Em, Uncle Henry, and the farmhands take shelter in the storm cellar as Dorothy arrives home. In the chaos, she seeks shelter in her bedroom, where the window is blown in from its frame and hits her on the head, knocking her unconscious. The house is sent spinning into the air, and she awakens to see various figures fly by, including Miss Gulch, who transforms into a witch on a broomstick.

The house lands in the colourful Munchkinland in the Land of Oz. Glinda the Good Witch of the North and the Munchkins welcome her as a heroine, as the falling house has killed the Wicked Witch of the East. Her sister, the Wicked Witch of the West, arrives to claim her ruby slippers, but Glinda transfers them onto Dorothy’s feet. Enraged, the Wicked Witch of the West swears revenge on Dorothy and vanishes. Glinda tells Dorothy to keep the slippers on and follow the yellow brick road to Emerald City, where she can ask the Wizard of Oz to help her return home. On her journey, Dorothy meets the Scarecrow, who wants a brain, the Tin Woodman, who desires a heart, and the Cowardly Lion, who needs courage. Dorothy invites them to accompany her to Emerald City, where they can also ask the Wizard for help. Despite the Witch’s attempts to stop them, they reach the city and are allowed to see the Wizard, who appears as a ghostly head. He agrees to grant their wishes if they prove their worth by bringing him the Witch’s broomstick.

As they make their way to the Witch’s castle, the Witch captures Dorothy and plots to kill her for the slippers. Toto escapes and leads her three friends to the castle. They ambush three guards, don their uniforms and free Dorothy. The Witch and the guards surround them and the Witch sets fire to the Scarecrow, causing Dorothy to toss a bucket of water on him, inadvertently splashing the Witch, who melts. The guards rejoice and give Dorothy her broomstick.

Upon their return, the Wizard stalls in fulfilling his promises until Toto pulls back a curtain and exposes the “Wizard” as a fraudulent middle-aged man operating machinery. Admitting to being a humbug, he insists that he is “a good man but a bad wizard.” The Wizard then gives the Scarecrow a diploma, the Lion a medal and the Tin Man a ticking heart-shaped clock, helping them see that the traits they wanted were already within them. He offers to take Dorothy and Toto home in his hot air balloon, revealing that he is also from Kansas and was originally a carnival worker before a tornado brought him to Emerald City, whereupon he accepted the job as Wizard due to hard times.

As Dorothy and the Wizard prepare to depart, the Wizard places the Scarecrow in charge of Emerald City, with the Tin Man and the Lion as his aides. Toto becomes distracted and leaps from Dorothy’s arms. As she pursues Toto, the balloon disembarks with the Wizard, leaving her behind. Glinda appears and tells Dorothy that the ruby slippers have the power to return her home. After Dorothy shares a tearful farewell with Scarecrow, Tin Man, and Lion, Glinda instructs her to tap her heels together three times, and state, “There’s no place like home.” Dorothy complies and wakes up in her bedroom surrounded by her family and friends. Everyone dismisses her adventure as it turned out to be a dream, but Dorothy insists it was real and says she will never run away again before declaring, “There’s no place like home!”

Watch The Wizard of Oz (1939) Movie With English Subtitles