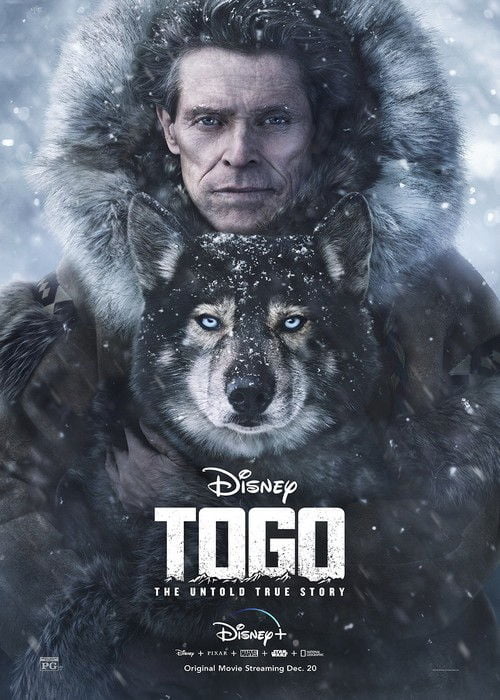 The story of Togo, the sled dog who led the 1925 serum run yet was considered by most to be too small and weak to lead such an intense race.

In the distant 1928, a disaster occurred in the small town of Nome, which is very difficult to find on the map. A diphtheria epidemic has begun, killing many people. Adults and children suffer from the disease, it is not easy for doctors to fight it, being in the middle of Alaska, away from large cities where there are vaccines. Hospitals are crowded, there are no places, and there are more patients every day. An endless stream of people begs for help, the situation becomes critical. Local doctors do not have enough medication available, it is not easy to fix it, because there are many miles to the nearest settlement.

A dangerous snowy desert separates the victims from salvation. In neighboring villages there is a vaccine that can help patients and overcome the epidemic in Nome. A tiny hope is all that remains. The brave Leonhard Seppala and his faithful friend, the dog of Togo, decide to go on a difficult journey to save the doomed inhabitants. The ice valley can only be overcome with the help of a dog team, and the main characters are ready to risk everything. The only thought is to get to the nearest city to get the vaccine, and save the infected. Time is short, it is necessary to act as quickly as possible.


The film flashes between musher Leonhard Seppala raising his dog Togo and the 1925 serum run to Nome.

In 1913, Seppala and his wife Constance welcome a newborn Siberian Husky pup to their sledding dog pack in Nome,Alaska. While Seppala insists on immediately retiring him due to his small and weak state, Constance is strongly supportive of the puppy. The young dog turns out to be close to unmanageable, and refuses to stay at home when the other dogs are working. He constantly escapes when left in the kennel, and seeks out Seppala’s dog team, causing great disruption to Seppala’s training routine. After trying to get rid of the Husky twice, the young dog escapes by crashing through a window pane and again returns to find the other dogs training. Seppala gives up and allows him to run with the others where, to his astonishment, he discovers that he is energetic enough to outrun the other dogs, and a natural leader of the dog team. He realises the puppy has the potential to be a future champion. He decides to call him Togo, after another underdog, Japanese admiral Tōgō Heihachirō. He fully trains Togo to the point where he successfully wins the All Alaska Sweepstakes, earning both Togo and himself some local fame.

In 1925, a diphtheria outbreak occurs in Nome; mostly affecting children. Mayor George Maynard plans to have the serum flown in from Nenana, but this proves to be impossible due to the severity of the weather. A meeting by town officials hears that air delivery is impossible due to the weather, and concludes that only Seppala has the skill to drive the 600 mile journey in such weather to collect the vaccine. Eventually, Seppala is convinced to collect the serum and race back, and decides to take Togo despite the dogs age (Togo is 12, which is old for a dog). Constance becomes concerned due to Togos age, and says the journey will kill the dog, but Seppala insists on going, and tells her that without Togo leading the team, he himself would be unlikely to survive. Seppala and his team tread through stormy weather and take a break at an outpost where a local doctor named Atiqtalik tells him that Togo is tired. Seppala continues on for miles; taking a dangerous shortcut across the melting Norton Sound to save a day’s sledding. In the meantime after he leaves, a relay effort is set up to bring the vaccine back, with different teams running 31 mile stretches each.

Seppala eventually meets up with a fellow musher, Henry Ivanov, who was bringing the serum to Nome as part of the relay, and is therefore able to leave back for Nome the next day. Seppala and his team head back across the Sound again – a high risk attempt to save time and strain on the dogs,by taking a dangerous shortcut across the breaking ice. The team become stranded on a broken piece of ice near the shore, and he is forced to throw Togo to shore, where the dog pulls the entire ice floe to safety. The effort, and the ensuing run through the driving storm, exhausts Togo. Reaching Atiqtalik’s outpost again, she tells him Togo is dying. Nevertheless, Seppala gets his team back to Joe Dexter’s outpost as he, Togo and team recuperate. The serum is passed off to fellow musher Gunnar Kaasen who arrives back in Nome. A reporter, confusing him for being the sole musher, announces his dog Balto as the hero who saved Nome, disappointing Constance.

Seppala returns to Nome later, where the entire town come to his house to celebrate Togo’s success. Seppala later becomes upset when a cured girl named Sally asks if Togo is dying. Seppala intends to continue training his dogs without Togo (who gained a paw injury during the run), but despite age and injury, Togo refuses to stay housebound and chases down Seppala who welcomes him with open arms. Over the next two years, Togo breeds puppies of his own that prove to be famous in their own right. Togo eventually passes away in 1929 with Seppala continuing to train dogs. A title card at the end reveals that while Balto had received a statue in his honor in New York, Togo is remembered in Alaska for making the longest run and for being the true hero of Nome, and his offspring became prized by mushers worldwide for their sledding capabilities.