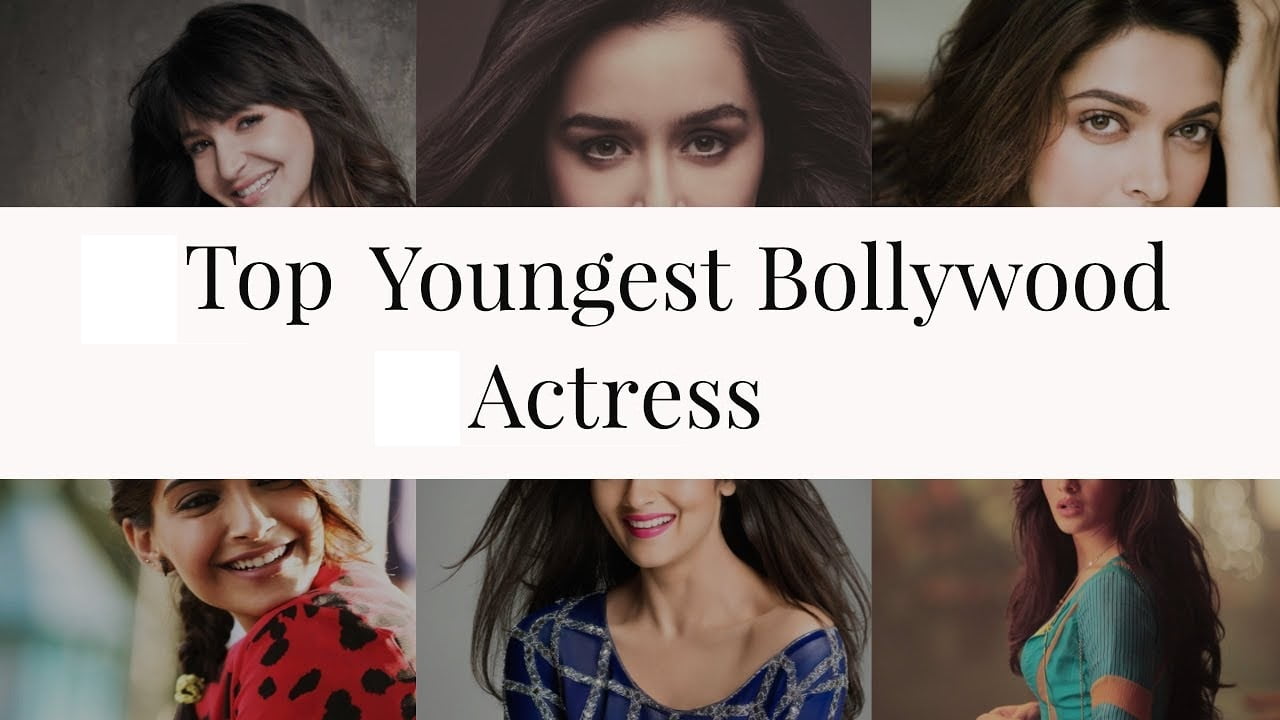 Cinema is one of the powerful media in India. It produces various new talents day by day, some of them succeed, some of them fail. Bollywood introduces some of the bold and beautiful young ladies to the cinema. A movie will be colorful when there is a young and charming heroine on the silver screen. There are a lot of actresses who enter the industry at a very young age and they are known for their charm as well as acting skills. It certainly takes a lot of hard work and it is also important for them to have the right timing while entering the industry. Here are our top picks for the youngest Bollywood actresses in 2020:

SourceShraddha Kapoor was born on 3 March 1987 in Mumbai. Her acting skill in Aashiqui 2 is one of the biggest blockbusters of all time. Made her debut in Teen Patti and later went on to act in many blockbuster films, including Haider, Baaghi and ABCD 2. She is also a singer. Her upcoming projects include Baaghi 2 and Batti Gul Meter Chalu.Check out details of Shraddha Kapoor

SourceKangana Ranaut was born on March 23, 1987, in Mandi District of Himachal state. She is also one of the highest paid actresses in Bollywood industry. She is well known for expressing her honest opinions in public. She is the recipient of three National awards and four Filmfare awards. She first aspired to become a doctor, but after she relocated to Delhi at the age of sixteen, she became a model. Her debut film was Gangster which was released in 2006 earned her first Filmfare award for best female actor debut. She received a National award for best actor female for Queen in 2014.

SourceSonakshi Sinha was born on June 2, 1987, to the legendary actors Shatrughan Sinha and Poonam Sinha. Early in her career, she was working as a costume designer and later went to make her debut in Dabbang opposite Salman Khan and receive a Filmfare award for the best female debut. She has also acted in Tamil movie Linga alongside legendary Rajini Kanth.

SourceBorn on November 1, 1987, she has predominantly acted in the Telugu cinema and she is one of the leading actresses in the Telugu cinema industry. She made her debut in the critically acclaimed Barfi alongside Ranbir Kapoor and Priyanka Chopra and earned her first Filmfare award in Bollywood Industry. She is one of the hottest chicks and fashion freak in Bollywood industry. She has also appeared in many fashion shows and has acclaimed great success.

SourceAnushka Sharma is one of the leading and highest paid actresses in Bollywood industry. She was born 1st of May 1988 in Ayodhya. She was well known for her role in Rab Ne Bana Di Jodi which was her debut film. She also features on Yash raj’s other films, including Band Baaja Baaraat and Jab Tak Hai Jaan. She was praised for his role in Sultan(2106) and Pk(2014).Check out details of Anushka Sharma

SourceKriti Sanon was born on 27th July 1990. She made her acting debut in Telugu Psychological thriller film 1: Nenokkadine. She also has a B.tech degree in Electronics and communication. Her Bollywood debut was in Sabir Khan’s romantic film Heropanti, opposite Tiger Shroff. She later went on to act in ‘Dilwale’ alongside Shah Rukh Khan, Kajol and Varun Dhawan. It was one of the biggest blockbusters of the year.

SourceNidhhi Agerwal is a beautiful and sexy young actress from Bangalore. She was born on 17 March 1993 and is an Indian model, dancer and actress who appears in Bollywood. In 2017, she made her acting debut in the film Munna Michael. She was Yamaha Fascino Miss Diva 2014 finalist. Nowadays, Nidhhi Agerwal is busy shooting for her Telugu Debut Savyasachi which is going to be released in 2020. She is trained in various dance forms like the Ballet, Kathak, and Belly dance.

SourceShe is currently the hot talk of the industry and acted just in two films. She touched the hearts of everyone with her role as Dhoni’s wife in Ms. Dhoni: The Untold Story. She was born as Alia Advani, on 31 July 1992, and made her debut in the 2014 comedy drama Fugly. Her most memorable performance, however, remains as Dhoni’s reel wife.

SourceDisha Patani is one of the hottest youngest sensations in Bollywood right now and she shows promises of making it big in the Bollywood industry. She is only 25 now, being born on 13 June 1992. She was first seen in a Cadbury advertisement that earned her a lot of reviews. Ever since then, she has acted in an album Befikra opposite Tiger Shroff. However, the movie that really brought her to the limelight was M.S. Dhoni: The Untold Story, in which she plays the first love interest of the legendary Indian cricketer. Her death in the movie brought tears to everyone’s eyes.

SourceAlia Bhatt is the youngest and one of the most beautiful actresses in Bollywood industry right now. She was born on 15th March 1993 into the Bhatt Family. She is the daughter of film producer Mahesh Bhatt and Soni Razdan. She is the recipient of one Filmfare and two stardust awards. She made her debut in Student of the Year and has acted in many blockbuster movies like 2 states, Udta Punjab, Highway, Dear Zindagi, and Badrinath Ki Dulhaniya. Check out details of Alia Bhatt

SourceDaughter of Nawab Saif Ali Khan and ex-wife Amrita Singh, Sara Ali Khan was born on 12 August 1993. She is all set to enter the entertainment industry with her upcoming movie “Kedarnath”. Her first print media appearance was on magazine ‘Hello!’ along with her mother. Once an obese, she weighed 96 kilos during her college days, she is now a fit and fab actress with a great fan following on social media.

SourceBorn to legendary actress, late Sridevi, and producer Boney Kapoor, Janhvi Kapoor celebrates her birthday on March 7th. She was born in the year 1997, and exactly 21 years later, made her debut in Bollywood from a romantic-drama movie- Dhadak. From her early childhood, Janhvi was fascinated to become a Bollywood actress. He did a wonderful job in her first film in which he was casted against, Ishaan Khattar.

SourceBorn in the UK, Banita is an Indian origin actress who first appeared in a movie October against Varun Dhawan. She hails from London and was born in the year 1998. She has also appeared in a number of TV commercials including Vodafone, & Double mint. She started her acting career when she was as young as 11 years.  She hails from a Sikh- Punjabi family and is pursuing graduation from King’s College London.

While this may have been the list of the youngest talents in the industry, there are many other actresses that would have made the list but could not because they were born a tad bit too early. Surely, Alia Bhatt would have found a worthy adversary for the top position with Deepika Padukone, had Deepika not been born more than half a decade earlier than Alia Bhatt. Nevertheless, the promise that is displayed by the acting talents of these young actresses surely makes one believe that the film industry in India would surely see new heights in the future. While the content of the movies matters, to a certain degree, the success of any movie is also determined by the popularity of the actors and the actresses that are starring in the movie.