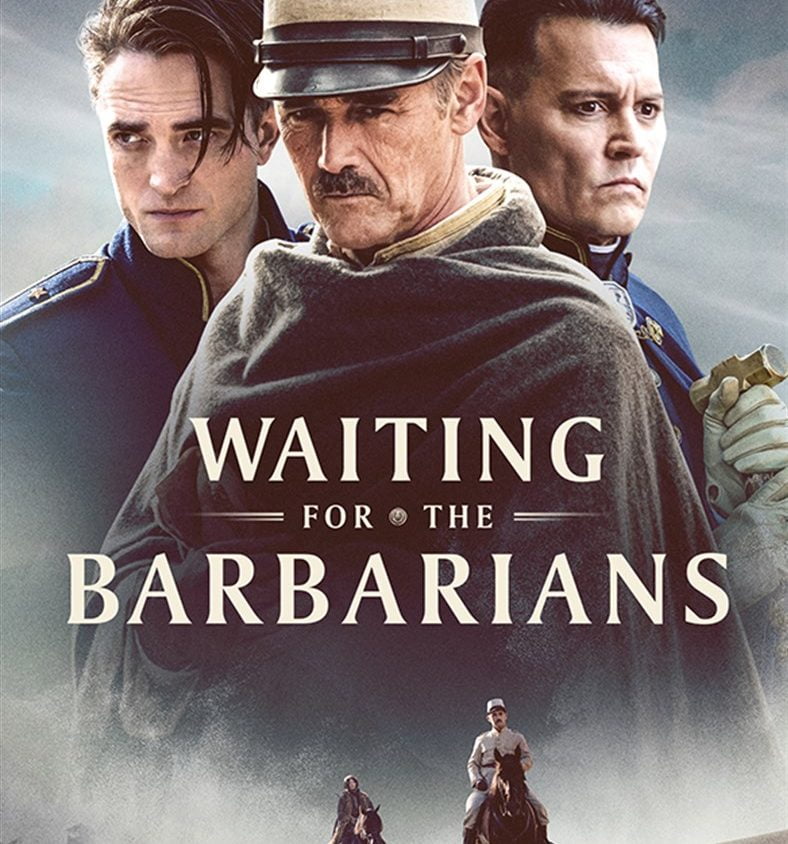 A Magistrate working in a distant outpost begins to question his loyalty to the empire.

If there is land, there will always be those who want to possess it against the wishes of the previous owners. The powerful invaders decided to call the local population of one state barbarians, and build a gigantic Empire. On the outskirts of the imperial territories, there is a frontier fortress city, which lives quite calmly. Flocks of curly sheep grazed peacefully in green meadows, crops ripened in fertile fields. A measured peasant life went on under the competent management of a talented magistrate. The delicate intellectual did no harm to anyone, but suddenly a check came to his residence. Colonel Joll had arrived from the center to investigate an important matter.

The auditor must find out what exactly is hidden behind the rumors of an impending barbaric attack. The tribes are supposedly going to attack, and form their own army. Conducting brutal interrogations, the military man shows inhuman cruelty, torturing prisoners. As the government envoy departs, the leader of the settlement finds a crippled female prisoner. Falling in love with a barbarian is a matter of time, and now the official is ready to renounce his previous views. The poor thing with broken ankles is only part of those tormented poor fellows who were unlucky enough to be interrogated. The rest had to endure enormous suffering that cost them their lives.

At an isolated frontier outpost, a colonial magistrate suffers a crisis of conscience when an army colonel arrives looking to interrogate the locals about an impending uprising, using cruel tactics that horrify the magistrate.


The Magistrate (Mark Rylance) manages an outpost on the frontiers of an unnamed Empire. The state of affairs is pacific and there are minor misunderstandings. At this point in marches Colonel Joll (Johnny Depp) who immediately requests to be briefed on the state of the affairs on the frontiers because of his ignorance. The Magistrate tries his best but Colonel Joll remains pessimistic, apparent when he apprehends, accuses, and incarcerates an innocent man and his nephew for being sheep rustlers. Colonel Joll not only disbelieves in their innocence but proceeds to torture them, resulting in the man’s death. The Magistrate confronts Colonel Joll about the torture and death to which Colonel Joll presents the nephew’s (extorted & false) confession to a fantastical notion of a barbarian uprising. Colonel Joll then forces the tortured nephew to take them to his deceased uncle’s tribe where Joll apprehends women and elderly men as “prisoners of war”.

Colonel Joll departs the next day, which prompts the Magistrate to immediately release all the “prisoners of war”. A few months later one of the prisoners of war with two broken ankles is seen panhandling in the streets. The Magistrate gives her food & shelter, and attempts to heal her broken ankles. Some of the soldiers mistake this act of kindness for an act of lust and the girl for the Magistrate’s concubine. The Magistrate learns of all the tortures she has gone through, including the death of her father. He asks her to stay at the fort but also shows willingness to return her to her people. The girl chooses the latter.

After a long and arduous journey through the desert the Magistrate approaches the nomads in the mountains and attempts to restore relations with them but the nomads are upset at this point and spare him his life and his horses simply for his act of kindness towards the girl. The Magistrate returns to find Officer Mandel (Robert Pattinson), a lackey of Colonel Joll, running the fort. Officer Mandel immediately takes the Magistrate into custody, accuses him of treachery, and incarcerates him.

After some time, the Magistrate exits the prison to see more “prisoners of war” being mistreated. He steps in to advocate for their release but is physically abused and tortured. He is then brought in for questioning and accused of consorting with the enemy and for taking concubines from the barbarians. The Magistrate is then publicly shamed while Colonel Joll departs with a force to drive the barbarians into the mountains. The Magistrate is himself now disheveled and dispossessed of everything. While Colonel Joll is out on the expedition the Magistrate is taken care of by one of his female cooks.

One day a horse carrying the corpse of one of the last soldiers in Colonel Joll’s forces returns. Officer Mandel walks away in fear & then announces a “temporary scaling back of forces” and promptly departs the outpost. The native population feels betrayed and abandoned after the soldiers encouraged the fort’s population to pillory and abuse the nomadic prisoners of war. As Officer Mandel and his men depart, the Magistrate returns to his rooms and his office to continue his studies surrounding the history of the local population.

One day one of Colonel Joll’s men returns asking for horses. They seem to be panicked as they run around and collect provisions. The Magistrate goes to see a pensive and thoughtful Colonel Joll sitting in his carriage. As the soldiers throw some provisions into the carriage the local population begins to pelt them with stones. The soldiers hastily depart into the night.

The Magistrate returns to a town bereft of young men, where boys play-pretend to stand guard around scarecrows dressed as soldiers by the gates of the fort. The movie closes with a shadow approaching the Magistrate standing alone in the courtyard, and a cloud of dust on the horizon – dust thrown up by an army of apparently nomadic warriors headed towards the fort.

Watch Waiting for the Barbarians Movie With Subtitles