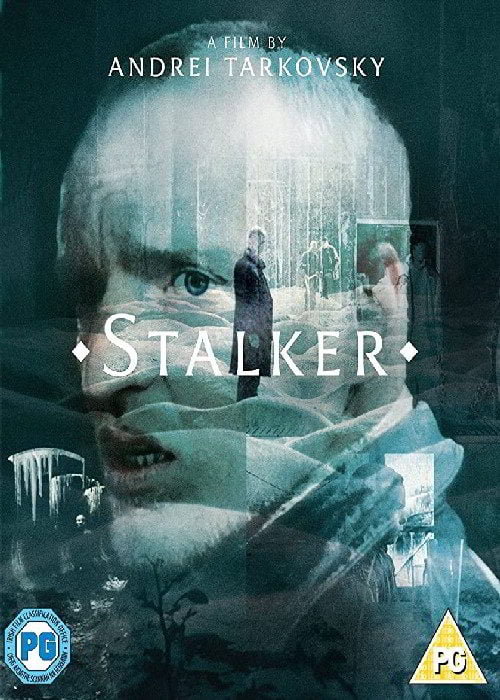 A guide leads two men through an area known as the Zone to find a room that grants wishes.

“Stalker” – a film adaptation of the eponymous work of the Arkady and Boris Strugatsky “Roadside Picnic”. Events unfold on the territory of one gloomy town, whose whereabouts are unknown. Here lives Stalker, who, together with his wife, has long gone through far from good times. They had to survive a huge number of quarrels and crisis situations. And this is largely due to the fact that despite the requests of his wife, the protagonist continues to go to the territory of the restricted area, where he works as a guide for everyone.

And this time, the fashionable Writer and Professor turn to him for help, who have long lost interest in life and are trying to understand whether they are engaged in their lives. Their activities and lifestyle have not brought them any pleasure for a long time. And the Zone is for them the last hope that they will again have a chance to realize their most cherished dreams. There is a legend that there is a secret room in the Zone that fulfills any desire. But is it really so? Ahead of these three people will be waiting for an incredible adventure, during which they will have to rethink many things.

Based on Roadside Picnic by Boris and Arkady Strugatsky.


In the distant future, the protagonist (Alexander Kaidanovsky) works in an unnamed location as a “Stalker” who leads people through the “Zone”, an area in which the normal laws of reality do not apply and remnants of seemingly extraterrestrial activity lie undisturbed among its ruins. The Zone contains a place called the “Room”, said to grant the wishes of anyone who steps inside. The area containing the Zone is shrouded in secrecy, sealed off by the government and surrounded by ominous hazards.

At home with his wife and daughter, the Stalker’s wife (Alisa Freindlich) begs him not to go into the Zone, but he dismissively rejects her pleas. In a rundown bar, the Stalker meets his next clients for a trip into the Zone, the Writer (Anatoly Solonitsyn) and the Professor (Nikolai Grinko).

They evade the military blockade that guards the Zone by following a train inside the gate and ride into the heart of the Zone on a railway work car. The Stalker tells his clients they must do exactly as he says to survive the dangers which lie ahead and explains that the Zone must be respected and the straightest path is not always the shortest path. The Stalker tests for various “traps” by throwing metal nuts tied to strips of cloth ahead of them. He refers to a previous Stalker named “Porcupine”, who had led his brother to his death in the Zone, visited the Room, come into possession of a large sum of money, and shortly afterwards committed suicide. The Writer is skeptical of any real danger, but the Professor generally follows the Stalker’s advice.

As they travel, the three men discuss their reasons for wanting to visit the Room. The Writer expresses his fear of losing his inspiration. The Professor seems less anxious, although he insists on carrying along a small backpack. The Professor admits he hopes to win a Nobel Prize for scientific analysis of the Zone. The Stalker insists he has no motive beyond the altruistic aim of aiding the desperate to their desires.

After traveling through the tunnels, the three finally reach their destination: a decayed and decrepit industrial building. In a small antechamber, a phone rings. The surprised Professor decides to use the phone to telephone a colleague. As the trio approach the Room, the Professor reveals his true intentions in undertaking the journey. The Professor has brought a 20-kiloton bomb (comparable to the Nagasaki nuclear bomb) with him, and he intends to destroy the Room to prevent its use by evil men. The three men enter a physical and verbal standoff just outside the Room that leaves them exhausted.

The Writer realizes that when Porcupine met his goal, despite his conscious motives, the room fulfilled Porcupine’s secret desire for wealth rather than bring back his brother from death. This prompted the guilt-ridden Porcupine to commit suicide. The Writer tells them that no one in the whole world is able to know their true desires and as such it is impossible to use the Room for selfish reasons. The Professor gives up on his plan of destroying the Room. Instead, he disassembles his bomb and scatters its pieces. No one attempts to enter the Room.

The Stalker, the Writer, and the Professor are met back at the bar by the Stalker’s wife and daughter. After returning home, the Stalker tells his wife how humanity has lost its faith and belief needed for both traversing the Zone and living a good life. As the Stalker sleeps, his wife contemplates their relationship in a monologue delivered directly to the camera. In the last scene Martyshka, the couple’s deformed daughter, sits alone in the kitchen reading as a love poem by Fyodor Tyutchev is recited. She appears to use psychokinesis to push three drinking glasses across the table. A train passes by where the Stalker’s family lives, and the entire apartment shakes.