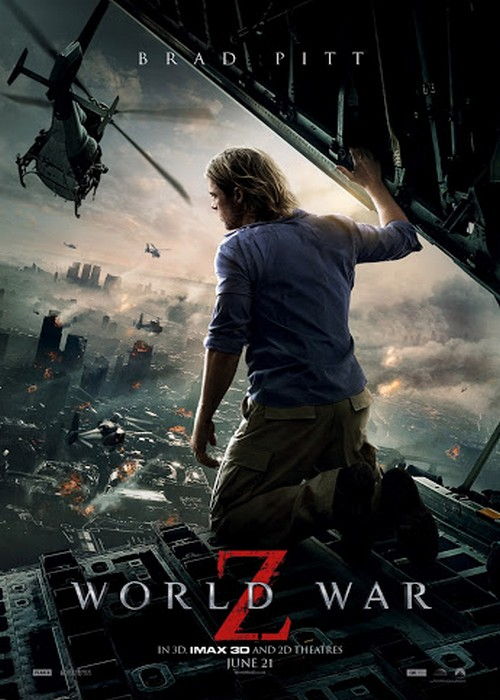 Life for former United Nations investigator Gerry Lane and his family seems content. Suddenly, the world is plagued by a mysterious infection turning whole human populations into rampaging mindless zombies. After barely escaping the chaos, Lane is persuaded to go on a mission to investigate this disease. What follows is a perilous trek around the world where Lane must brave horrific dangers and long odds to find answers before human civilization falls.

Former United Nations employee Gerry Lane traverses the world in a race against time to stop a zombie pandemic that is toppling armies and governments and threatens to destroy humanity itself.

Based on World War Z by Max Brooks


Former UN field agent Gerry Lane, his wife Karin, and their two daughters are in heavy Philadelphia traffic when the city is overrun by zombies. As chaos spreads, the Lanes escape to Newark, New Jersey and take refuge in an apartment with a Hispanic family and their son Tommy, though they are forced to escape once again when a horde of zombies attack the apartment, resulting the Hispanic family being infected and turned to zombies save for Tommy. UN Deputy Secretary-General Thierry Umutoni, an old friend of Gerry, sends a helicopter that extracts the Lanes to a U.S. Navy vessel in the Atlantic Ocean where scientists and military personnel are analyzing the worldwide outbreaks. Andrew Fassbach, a young virologist, posits that the plague is a virus and that the development of a vaccine depends on finding the origin. Gerry is forced to either help Fassbach find the outbreak source or the family will be evicted.

Gerry, Fassbach, and a military team fly to Camp Humphreys, a military base in South Korea—zombies attack—Fassbach turns to enter the aircraft, slips and accidentally shoots himself to death. Surviving American soldiers at the camp rescue the team and Gerry learns the infection was introduced to the base by its doctor. A former CIA operative imprisoned at the base sends Gerry to Jerusalem, where the Israeli Mossad set up a safe zone before the outbreak was officially acknowledged. Zombies attack again as the team returns to the plane, only Gerry and his pilot escape.

In Jerusalem, Gerry meets Mossad chief Jurgen Warmbrunn, who explains that months earlier, the Mossad had intercepted a military transmission claiming Indian troops were fighting the rakshasa, or “zombies.” Israel fortified Jerusalem, erecting huge walls around it. Just as Jurgen shows Gerry survivors entering the city, loud celebratory singing from refugees prompts zombies to scale the walls and attack. Jurgen orders Israeli soldiers to escort Gerry back to his plane. On the way, Gerry notices zombies ignoring an old man and an emaciated boy. Soon after, one of Gerry’s escorts, “Segen” (Lieutenant), is bitten in the hand—Gerry quickly amputates to prevent infection. The pair escape on a commercial airliner as Jerusalem falls.

Gerry radios Thierry, who diverts the flight to a lab in Wales. A zombie stowaway attacks during the landing approach. Gerry blows the infected out of the aircraft with a grenade, causing the plane to crash. Gerry is injured, but he and Segen reach the lab. He explains he has seen zombies ignore the seriously injured or terminally ill since they would be unsuitable hosts for viral reproduction. He suggests that they test this by deliberately infecting someone. Deadly pathogens are stored in a lab wing already overrun by zombies. Gerry, Segen, and the lead WHO doctor fight their way through but are separated. Gerry continues to the pathogen vault as Segen and the doctor return to the main building. Gerry hurriedly grabs vials of pathogens but a zombie is blocking the door, prompting Gerry to inject himself and open the vault, testing his theory. The zombies ignore him as he returns to the main building where his infection is identified and cured.

Gerry and Segen reach a Safe Zone at Freeport, Nova Scotia and find the other Lanes including Tommy (who is presumed to be adopted since his family got infected). A new vaccine derived from deadly pathogens provides camouflage for survivors and an offensive can begin against the zombies’ plague.