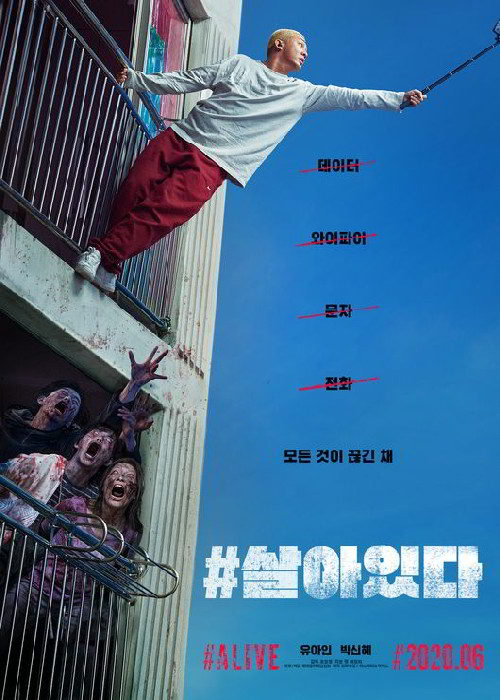 A young man wakes up from a strange noise in the street. A terrifying picture is presented to his gaze. The streets are filled with zombies and people who do not understand what is happening and are trying to fight them. The wave of the epidemic covers everything around. Realizing that it is unsafe in an open area, the hero remains isolated in the trap of his own apartment.
The creatures walking around the area turned out to be quite aggressive and attracted by any sounds. Leaving the shelter is tantamount to death, but soon the boy sees in the house opposite the surviving girl who gave him signs. Realizing that together there is a chance for survival, the heroes decided to unite in the fight against soulless creatures.

The rapid spread of an unknown infection has left an entire city in ungovernable chaos, but one survivor remains alive in isolation. It is his story.

Based on Alone by Matt Naylor

Joon-woo lives with his parents and sister, and spends his days video game live streaming. One day, while his family is out, Joon-woo’s online party members urge him to turn on the TV. The news reports that a mysterious, rapidly-spreading disease is causing the infected to eat one another, and the government has lost control. Joon-Woo looks out from his balcony to see masses of people running and devouring each other. Joon-Woo goes to check outside his apartment, but a neighbour barges in as soon as he opens the door. As Joon-Woo urges him to leave, the neighbour succumbs to infection. Joon-Woo barely manages to push him out and lock the door before a larger infected man passes by and brutalizes his infected neighbour. Joon-Woo receives messages from his parents telling him that they are safe, but that he must stay alive.

Joon-Woo barricades himself in his apartment. Joon-Woo follows the lead of other survivors and posts a rescue request on social media. No help comes. Within days, the neighbourhood has been overrun with infected. Though the power stays on, Joon-Woo gradually loses access to running water, internet access, and phone networks. The news reports on the infection but has nothing to say about rescue. Joon-Woo watches a woman with a pistol attempt to escape the apartment complex from his balcony, but she is overwhelmed and infected.

Eventually, the large infected man returns breaks into Joon-Woo’s apartment. Joon-Woo narrowly survives by baiting the infected man into running over his balcony. Joon-Woo repairs his door barricade, but his food and water supplies run low. He resorts to his father’s liquor cabinet for sustenance. As Joon-Woo hallucinates about his family, his phone network is restored momentarily and he received a voicemail from his family. Joon-Woo is ecstatic at first, only to realize the voicemail records his family’s last moments. In a fit of rage, Joon-Woo destroys his TV and leave the apartment. He successfully kills an infected man, but runs into hordes and barely escapes back to his apartment.

Driven by loneliness, Joon-Woo broadcasts a farewell message and prepares to hang himself but stops when he sees a laser pointer beam. He follows the beam to an apartment opposite his balcony where another survivor, Yoo-bin, is signalling him. They begin signalling to each other daily at their balconies. Seeing that Joon-Woo is hungry, Yoo-bin tries to connect their apartments with a homemade zip line. She first ties string to her table on one end and a baseball on the other, and throws the baseball to Joon-Woo’s balcony. The baseball falls short and drops to the ground. Taking inspiration, Joon-woo uses his flying drone to carry a string from his apartment to Yoo-bin’s. Yoo-Bin uses the zip line to send him food. However, an infected man picks up the baseball and pulls it, causing Yoo-bin’s table to fly across her apartment. The table strikes Yoo-bin, knocking her out, and then gets caught on her balcony railing. The infected then begins to climb up the string to Yoo-Bin’s apartment. Joon-woo tries to stop the infected using his drone, and successfully distracts it long enough for Yoo-bin to wake up and kill it.

Joon-Woo decides to search for food supplies in neighbouring units. He finds the body of the neighbour who barged into his apartment earlier, loots the corpse for his key, and goes into the apartment. There, he finds food, sports gear, and walkie talkies, but is ambushed by the neighbour’s infected brother. Joon-Woo escapes with the supplies and uses a zip line to send one to Yoo-Bin.

Joon-Woo and Yoo-Bin begin talking via walkie talkie. They regain some sense of companionship. One day, the infected hordes becomes agitated and begin charging around the neighbourhood. When Yoo-bin accidentally knocks over furniture, the sound causes a group to converge on her apartment. Joon-Woo distracts them by calling the apartment next door to her and making its buzzer to sound.

Realising that they will eventually die if they stay put, Joon-Woo and Yoo-Bin plan to reach the 8th floor of Joon-Woo’s apartment. Yoo-Bin can see it is empty from her apartment. Yoo-Bin rappels her way down and with Joon-Woo’s help, crosses to his apartment. Joon-Woo picks up the pistol dropped earlier on the way. They make it to the eighth floor together. However, a lone zombie on the floor notices them and alerts the horde, who run up the stairs. A man emerges from an 8th floor apartment and saves them just in time. In his home, Yoo-Bin is initially suspicious but at Joon-Woo’s insistence eventually accepts the man’s food and drink. However, the food is drugged. The stranger cuffs both Joon-Woo and Yoo-Bin, and then tries to feed Yoo-Bin to his locked-up, infected wife. Joon-woo manages to wake up in time and threatens the stranger with the gun. Yoo-Bin manages to get a bag over the infected wife’s head, quieting her, and then releases her upon the stranger when he opens the door to see what happened. Yoo-Bin takes then gun and shoots both the stranger and his wife.

As Joon-Woo and Yoo-Bin are taken to safety, a voiceover by an anchorman explains that wireless networks are being restored and the military has begun rescuing survivors who made social media posts. The film ends with a picture of Joon-Woo’s post from the beginning.