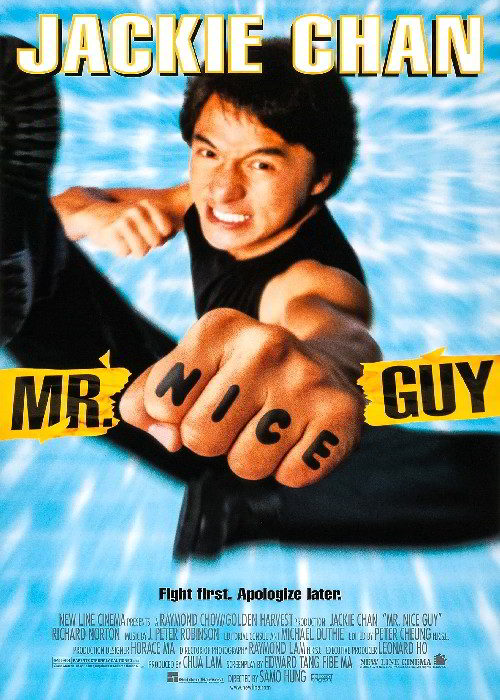 Jackie is a great chef and TV star. He hosts his own culinary show, which is well known throughout Australia. The host of the culinary show rightly believed that the worst thing to expect in his litter in his life is the injury that he can get while performing his culinary tricks. But as you know, life is full of surprises, so Jackie did not stay away from this fact.

The TV presenter, returning home one day, became a participant in a difficult situation. A young beauty, who is trying to hide from someone, will get into his car. Jackie sees that criminals are chasing her and decides to help her. It turns out that this girl is a journalist who managed to record the tape. The girl has evidence of the criminal activity of this gang on the cassette, and if the record gets into the media, she will be able to draw attention to this problem.

But in the confusion, the girl accidentally confuses the cassette in Jackie’s car and leaves after saying goodbye. The guy does not yet know that now he is very much in trouble. He is holding a video cassette for which the most influential criminals of the city are hunting. The angry bandits are already following the trail and the TV presenter will be forced to defend himself as best he can. But is he as bad in combat as he himself thinks?
Also Known As: Yat goh ho yan

In Melbourne, the Chinese Chef Jackie has a successful show on television. The drug lord Giancarlo and his gang are dealing cocaine with The Demons gang, but they fight against each other. During the shooting, the snoopy reporter Diana and her partner are accidentally exposed and they flee with a VHS tape with the footage of the negotiation. On the street, she stumbles with Jackie and he helps her fighting against the gangsters. When they are escaping in his car, her tape accidentally mixes with other videotapes that Jackie has in a box on the backseat of his car. Jackie goes to his apartment and meets his girlfriend Miki while his nephews “borrow” the tape to watch. Meanwhile Giancarlo’s gangsters are looking for the tape and abduct Miki. Jackie’s friend Romeo, who is a police detective, chases the gangsters with other policemen while Jackie teams up with Diana and his friend Lakisha to release Miki from Giancarlo.

Television journalist Diana (Gabrielle Fitzpatrick) records footage of a cocaine deal gone wrong between the Italian mob and a street gang called The Demons. During the deal, mob boss Giancarlo (Richard Norton) kills the Demons’ leader Grank (Peter Lindsay) and a gun fight (with grenades) ensues. Giancarlo spots Diana and her partner Richard and orders his gang to chase them. Richard is captured while Diana flees from the mobsters, bumping into TV chef Jackie (Jackie Chan), who helps her escape. During the chase, she accidentally switches the videotape of the drug trade with one of Jackie’s cooking videos. The children of Romeo Baggio (Vince Poletto), Jackie’s adoptive brother, end up in possession of the tape. His children watch the video, unaware of what it is and that their father is investigating the mob.

The mob, knowing the tape is still out there, force Richard to give them Diana’s address. They ambush Diana at her house, but after realizing she has the wrong tape, they force her to come with them after she reveals that Jackie has the tape. While walking outside with the mobsters, Diana instigates a distraction and flees. The mob believes Jackie has the tape and follows him around, while some Demons follow them, hoping for a chance to kill some of the mobsters in retaliation for killing Grank. Jackie is forced to fend them off and run when they attack him at a benefit event he is hosting at the mall. Puzzled at the mobsters’ actions, one of the Demons asks a mobster why they’re chasing Jackie.

Jackie learns why the mob is chasing him after Diana sneaks into his house searching for the tape. She is attacked by Jackie’s friend Lakeisha, who thinks her an intruder, but Jackie intervenes. Diana begs for the tape, but Jackie is (correctly) convinced that he doesn’t have it. Before Diana can leave Jackie’s apartment building, Giancarlo’s henchmen show up (unaware that Demon members have been following them). Jackie and the women escape from the roof just as the Demons throw grenades in Jackie’s apartment, killing the mobsters and blowing up Jackie’s apartment. The Demons realize afterwards that was Jackie’s apartment, and how serious Giancarlo is about retrieving the videotape. They decide to exploit the situation in order to extort money from Giancarlo. They call Giancarlo to set up a meeting to trade the tape (and the mob’s stolen cocaine) for a large sum of money.

Everyone decides to stay at Lakeisha’s home for safety, but the Demons track them. They kidnap Jackie’s girlfriend Miki (Miki Lee) and give Jackie a cell phone, demanding that he give them the videotape in 12 hours. Jackie turns to Romeo for the police’s help. The next day, Jackie goes to meet the Demons to trade in a (decoy) videotape, but no Demon meets Jackie in person. Instead, they frequently call him on his cell phone and make him go to various locations in the city. The police trace each call, but discover the Demons are trying to thwart their presence, so they follow Jackie instead. However, the gang discovers this and they escape with Miki. Jackie, angry at the cops’ mishandling, refuses to work with them anymore. However, he is kidnapped by the Demons moments later. Jackie fights off the gang and causes their van to crash. Before the police show up, Jackie forces one of the Demons to tell him where Miki is: at a construction site.

Jackie insists to Diana and Lakeisha not to follow him to the construction site, but they go there anyways. While Jackie looks for Miki, Giancarlo and his men show up. A fight ensues between Jackie and the mobsters, which ends in Jackie getting captured. Lakeisha and Miki are also taken, while Diana is injured but escapes. Giancarlo murders the other Demons on site except for Tara, who also escapes but with serious injuries. Meanwhile, Romeo discovers his son watching Diana’s tape, the proof he needs to arrest the mob, and visits the hospital where Diana and Tara are being treated. The women inform him about what happened to Jackie and the others.

At Giancarlo’s home, Giancarlo demands the tape from Jackie one last time. Jackie decides to call Romeo, but he’s not home. Afterwards Jackie is forced into an unfair fight with Giancarlo. After taking a beating, Giancarlo orders his men to kill Jackie and the women at “the guesthouse”, which is code for a mining site used by Giancarlo where he buries people alive. However, they escape and destroy Giancarlo’s home by driving through it in a 120-ton mining vehicle, which also causes incriminating evidence (cocaine) to be spread outside in plain view of the cops. The authorities arrive with Romeo, but they decide to state that they did not witness anything and that it was just another gang battle, so that Jackie can go free while the mobsters are arrested for possession of cocaine.