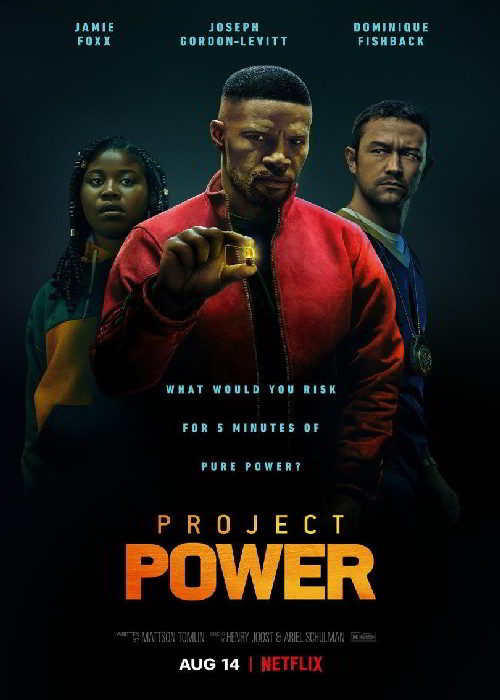 Taglines: What would you risk for 5 minutes of pure power?

An ex-soldier, a teen and a cop collide in New Orleans as they hunt for the source behind a dangerous new pill that grants users temporary superpowers.

When a pill that gives its users unpredictable superpowers for five minutes hits the streets of New Orleans, a teenage dealer and a local cop must team with an ex-soldier to take down the group responsible for its creation.

On the streets of New Orleans, word begins to spread about a mysterious new pill that unlocks superpowers unique to each user. The catch: You don’t know what will happen until you take it. While some develop bulletproof skin, invisibility, and super strength, others exhibit a deadlier reaction. But when the pill escalates crime within the city to dangerous levels, a local cop (Joseph Gordon-Levitt) teams with a teenage dealer (Dominique Fishback) and a former soldier fueled by a secret vendetta (Jamie Foxx) to fight power with power and risk taking the pill in order to track down and stop the group responsible for creating it.


In near-future New Orleans, a mysterious distributor offers a free supply of “Power”–a pill that grants superpowers for five minutes–to a group of drug dealers, including Newt.

Six weeks later, Newt’s teenage cousin Robin, a dealer herself, is nearly robbed by customers seeking Power. She is rescued by NOPD Officer Frank Shaver, one of her regular buyers. Art, a man hunting for the distributor “Biggie”, tracks down Newt, who dies after a struggle when he overdoses on Power. Frank foils a bank robbery by a Power-enhanced thief, but is suspended for using Power himself. His captain reveals that government personnel are pressuring him to terminate any investigation into Power, and gives Frank a picture of the man they suspect to be the source of the drug: Art.

Using Newt’s phone to find and abduct Robin, Art forces her to take him to the drug cartel’s safehouse. He is shot while eliminating several of the cartel’s men, and discovers that Power users throughout New Orleans are being monitored as test subjects for the drug. Art bonds with Robin as they treat his wounds, and reveals that after leaving the military, he was recruited by Teleios, a private defense contractor who experimented on him to create superpowers. His daughter Tracy, born after the experiments, exhibited powers without ever taking the drug, and was abducted by Wallace, a Teleios operative.

Art and Robin find Biggie hosting a private demonstration of Project Power for a potential buyer near the Superdome, where large groups of Saints fans are arriving for a home game. Biggie claims that Power represents “the next evolution of the human species”, with the pill’s powers derived from the abilities of animals, such as the wolverine frog or chameleon. Art interrogates Biggie at gunpoint and learns of a ship, the Genesis, but Frank intervenes, having tracked other users to the demonstration. Biggie takes a dose of Power, forcing Art, Robin, and Frank to flee as Art kills Biggie in an explosion.

Frank arrests Art and informs his captain, but Art explains that the Power epidemic in New Orleans is mass testing to stabilize the drug, and that Tracy is the source of the drug’s powers. Having convinced Frank that his captain is actually taking orders from Teleios, Art purposely has himself captured by Teleios and taken aboard the Genesis. Frank and Robin infiltrate the ship, and Art persuades a guard to free him. Frank and Art kill Wallace, while Robin finds Tracy and reunites her with her father.

As the four attempt to flee, Robin is captured by Dr. Gardner, the head of Project Power, who demands Tracy in exchange for Robin’s life. Art confronts Gardner, revealing that Power gives him the abilities of a pistol shrimp, which he uses to kill Gardner and her men and rescue Robin. Using his power costs Art his life, but Tracy resurrects him with her own powers, and they all escape the ship.

Frank intends to expose Project Power to the press, while Art decides to move on. He gives Robin his truck and a bag full of money to cover her mother’s medical needs, telling her to use the greatness inside of her. Art and Tracy depart, finally free.