Once Upon a Time in the West
Next Video 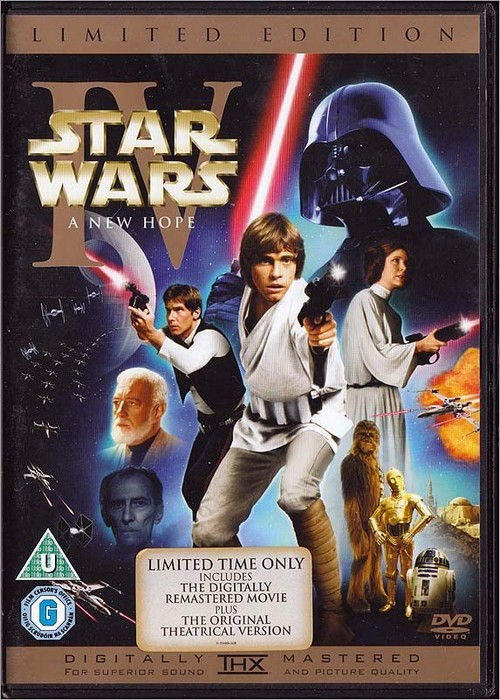 Taglines: May the Force be with you. One year old today.

Luke Skywalker joins forces with a Jedi Knight, a cocky pilot, a Wookiee and two droids to save the galaxy from the Empire’s world-destroying battle station, while also attempting to rescue Princess Leia from the mysterious Darth Vader.


The galaxy is in a period of civil war. Rebel spies have stolen plans to the Galactic Empire’s Death Star, a moon-sized space station capable of destroying an entire planet. Princess Leia, secretly one of the Rebellion’s leaders, has obtained its schematics, but her starship is intercepted by an Imperial Star Destroyer under the command of the ruthless Sith Lord Darth Vader, an agent to the Empire. Before she is captured, Leia hides the plans in the memory of astromech droid R2-D2, who, along with protocol droid C-3PO, flees in an escape pod to the desert planet Tatooine.

The droids are captured by Jawa traders, who sell them to moisture farmers Owen and Beru Lars and their nephew Luke Skywalker. While cleaning R2-D2, Luke accidentally triggers part of a holographic recording of Leia, in which she requests help from Obi-Wan Kenobi. The only Kenobi whom Luke knows is “Old Ben” Kenobi, an elderly hermit. He asks his uncle if he knows anything, but his uncle curtly drops the subject. The next morning, Luke finds R2-D2 missing, and while searching for him, encounters Old Ben. Ben, who reveals his true name to be Obi-Wan, tells Luke of his days as a Jedi Knight, former peacekeepers of the Galactic Republic who derived their power from an energy field called the Force until they were wiped out by the Galactic Empire. Contrary to what his uncle has told him, Luke learns that his father fought alongside Obi-Wan as a Jedi Knight until Vader, a former pupil of Obi-Wan’s, turned to the dark side of the Force and murdered him. Obi-Wan presents Luke with his father’s old weapon, a lightsaber.

R2-D2 plays Leia’s message for Obi-Wan, in which she begs him to take the Death Star plans to her home planet of Alderaan and give them to her father for analysis. Obi-Wan invites Luke to accompany him to Alderaan and learn the ways of the Force, but Luke declines, saying his aunt and uncle need him. Returning home, however, he finds Imperial stormtroopers have killed his aunt and uncle and destroyed their farm in their search for the droids, leaving Luke no choice but to accept Obi-Wan’s invitation. They travel to a cantina in Mos Eisley, where they hire smuggler Han Solo to transport them. Han is intercepted by Greedo, a bounty hunter working for local mobster Jabba the Hutt, to whom Han owes money; the confrontation ends with Han killing Greedo. Obi-Wan, Luke, R2-D2 and C-3PO flee Tatooine, with Han and his Wookiee co-pilot Chewbacca on their ship the Millennium Falcon.

Death Star commander Grand Moff Tarkin orders the destruction of Alderaan, Leia’s home planet, using the Death Star’s superlaser as a show of force.[7] The Falcon crew discovers the planet’s remains and is captured by the Death Star’s tractor beam, which Obi-Wan goes to disable. Luke discovers that Leia is imprisoned on the Death Star and scheduled to be executed, and rescues her with the help of Han and Chewbacca in a swashbuckling series of escapes. His task accomplished, Obi-Wan sees that the others need a distraction to board the Falcon, and sacrifices himself in a lightsaber duel with Darth Vader. They depart the hangar but are caught up by four Imperial TIE starfighters which they fight off. Using a tracking beacon placed on the Falcon, the Imperials follow the rebels to the hidden base on Yavin 4.

Leia’s schematics show that the Death Star might be destroyed by firing torpedoes into a two-meter-wide thermal exhaust port that directly leads into its reactor, triggering a chain reaction. Han collects a reward for his role in Leia’s rescue, intending to leave and repay Jabba. Luke joins the Rebel squadron in a desperate attack against the approaching Death Star. In the ensuing battle, the Rebels suffer heavy losses in several unsuccessful runs. Vader leads a squadron of TIE fighters and prepares to attack Luke’s X-wing, but Han returns and attacks the Imperial fighters, sending Vader spiraling into space. Guided by Obi-Wan’s spirit, Luke turns off his targeting computer and uses the Force to guide the torpedoes into the exhaust port. The Death Star explodes just before it can fire on the Rebel base, killing Tarkin and the Imperial troops onboard. In a triumphant ceremony at the base, Leia awards Luke and Han medals for their heroism.