Farscape: The Peacekeeper Wars
Next Video 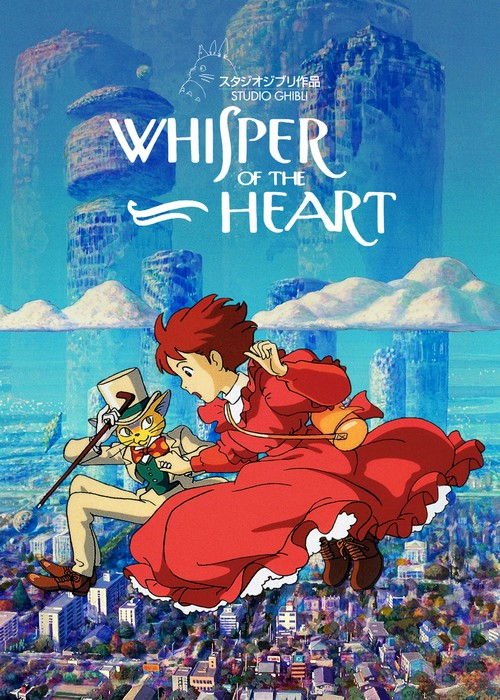 The main character of the cartoon is a girl named Shizuku Tsukishima.Shizuku is a pretty, smart, and silent girl in middle school. She, unlike many of her peers, does not like to discuss boys from the classroom, gossip about other girls and go shopping. Shizuku gets a lot more pleasure when he sits in the library, reads the next book he likes and presents himself in a fictional world. Shizuku, silent and secluded from nature, does not like to spend time in noisy companies, with her friends or classmates. Rest in the library, a mug of hot sweet tea replace her with everything in the world.

Not so long ago, Shizuku noticed that many of the books she liked were marked by a certain boy named Seiji Amasawa. Shizuku is increasingly starting to wonder who this amazing and inquisitive young man has read and loved all Shizuku’s favorite books. She decides to find this boy, and meeting him becomes the most important event in her life. She has a crush on Seiji and realizes that this is her first serious feeling for a boy. Suffering, enjoying, surrendering to her feeling, Shizuku begins to grow up and look for herself.

A love story between a girl who loves reading books, and a boy who has previously checked out all of the library books she chooses.

Based on Mimi o Sumaseba by Aoi Hiiragi


Shizuku Tsukishima is a 14-year-old student at Mukaihara Junior High School, where she is best friends with Yūko Harada. Living in Tokyo with her parents Asako and Seiya, as well as sharing a room with older sister Shiho, Shizuku is a bookworm and is keen on creative writing. During an ordinary evening, she looks through the checkout cards in her library books. She discovers they were all checked out previously by someone named Seiji Amasawa.

Over the next few days, Shizuku encounters a young man, later revealed to be Seiji, who annoys her by teasing her about “Concrete Roads”, a set of original lyrics describing Tama New Town that Shizuku has written to the tune of the song Take Me Home, Country Roads. Finding a cat riding a train, Shizuku follows it to discover an antique shop run by Shirō Nishi. In the shop is a cat statuette nicknamed “The Baron”. Shizuku is ecstatic about finding “a place where stories begin” and asks Nishi if she may return.

Shizuku later finds her way back to the antique shop, where Seiji encounters her. Seiji shows Shizuku the workshop below the showroom, where she discovers that he is learning to make violins to pursue his dream of becoming a master luthier. Shizuku begs Seiji to play violin for her, but he only agrees on the condition that she sing along. Seiji and a mortified Shizuku perform “Take Me Home, Country Roads”, accompanied by Nishi and his friends. Seiji is revealed to be the grandson of Nishi, and Shizuku and Seiji finally befriend each other.

Days after the two meet, Seiji leaves for Cremona, Italy, for a two-month study with a master violin-maker, but not before admitting that he admires Shizuku’s talents and that he had been checking out a large number of books in the hopes that she would eventually notice him. Inspired by Seiji pursuing his dream, Shizuku resolves to test her talents as a creative writer. She decides to pursue her writing seriously during the two months. She asks Nishi if she can write a story featuring the Baron, to which Nishi grants his consent in exchange for being the first to read her finished story.

Shizuku concocts a fantasy story featuring herself as the female protagonist, the Baron as the male hero who is looking for his lost love, Louise, and the cat she followed from the train (a neighborhood stray who is, among other names, known as “Moon” and “Muta”) as the story’s villain who took Louise from the Baron. Devoting her time to her writing, Shizuku eats snacks, stays up until early in the morning, and her school grades drop drastically. Shizuku argues with her family over her grades and whether she will even attend high school. As she continues to push herself into finishing the story before Seiji returns, her anxiety mounts and she begins to lose heart.

When her story is complete, Shizuku delivers the manuscript to Nishi. After Nishi reads Shizuku’s writing and gives her his honest assessment, she breaks down in tears as the stress of the last two months finally turns into relief. Consoling her with udon, Nishi tells Shizuku the real-life story of the Baron. Nishi reveals that when he studied in Germany in his youth, he found his first love, a young woman named Louise. Nishi discovered the twin statuettes of the Baron and his female companion in a cafe, but as the female statuette was away for repairs, the shopkeeper would only allow Nishi to buy the Baron if Louise agreed to hold onto the Baron’s companion so that they could be reunited once Nishi returned to Germany. However, the two lovers and their cat statues were separated during World War II and Nishi could find no trace of Louise afterward. In the English dub, Seiji tells Shizuku that the Baron has a missing partner during her second visit to the shop, but in the Japanese dialogue Seiji says his grandfather won’t tell anyone the story behind the Baron, and it is through coincidence, intuition, or serendipity that Shizuku invents a missing partner for him (much to Nishi’s surprise).

Deciding she needs to learn more about writing, and that she does want to attend high school after all, Shizuku is returned home by Nishi and announces to her mother that she will resume studying for her high school entrance exams full-time. Early in the next morning, she wakes up and looks outside her window to see Seiji on his bicycle. He has returned a day early. In the English dub, Seiji tells Shizuku that he decided to finish high school before returning to Cremona to become a luthier, but in the Japanese dialogue, Seiji says he will return to Cremona after middle school graduation as planned.

The two ride Seiji’s bike to a lookout and watch the sun rise over the city, where Seiji professes his love for Shizuku and proposes that they marry at some point in the future; she happily accepts.

Watch Whisper of the Heart (1995) Movie With English Subtitles