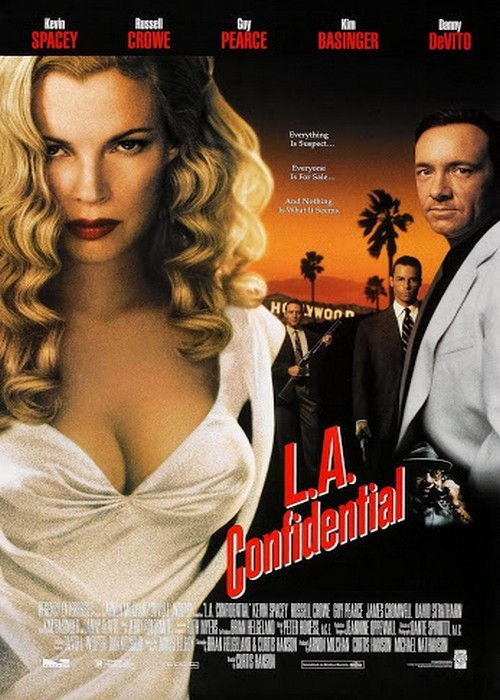 Taglines: Off the record, on the QT, and very hush-hush…

Based on L.A. Confidential by James Ellroy.

As corruption grows in 1950s Los Angeles, three policemen – one strait-laced, one brutal, and one sleazy – investigate a series of murders with their own brand of justice.

The action of the film takes place in the fifties of the last century in Los Angeles. In the center of the plot are three completely different from each other detectives who happened to find themselves in the territory of one police station. And until recently, they worked separately, preferring their own methods of fighting crime. They have a different character and outlook on the situation, so it seemed that there could be nothing in common between the main characters. But after one high-profile crime, the situation will change once and for all.

The first detective is a man accustomed to solving problems through fists and weapons. He has a complex character and regularly goes against all those attitudes given by his superiors. The second is the “right” beginner who knows the theory thoroughly, but rarely holds a weapon in his hands, preferring to work with papers. And for this reason, mutual dislike and suspicion immediately arose between the two people. The third one advises television people at all and is engaged in dubious activities. Once, in a cafe, a mass murder occurs, as a result of which the police killed the perpetrators. But the detectives have doubts about the fact that everything is so simple in this matter.


In early 1950s Los Angeles, LAPD Sergeant Edmund “Ed” Exley is determined to live up to the reputation of his father, famed detective Preston Exley, who was killed by an unknown assailant whom Exley nicknamed “Rollo Tomasi”. Already isolated from other officers by his intelligence and career ambitions, he volunteers to testify against them in the “Bloody Christmas” case in exchange for promotion to Detective Lieutenant, despite the advice of precinct captain Dudley Smith.

Exley soon investigates a robbery and multiple homicide at the Nite Owl coffee shop. Stensland was one of the victims. Exley and Vincennes arrest three African-American felons for the crime; they later escape from police custody and are killed by Exley in a shootout. Exley is decorated for bravery. Although the Nite Owl case appears solved, Exley and White individually investigate further, discovering evidence of corruption all around them. White begins a relationship with Lynn, and recognizes Nite Owl victim Susan Lefferts as one of Patchett’s escorts. Lefferts’ mother tells White that Stensland was Susan’s “boyfriend”; White searches the crawl space under her house and finds Meeks’ corpse. He then interrogates Johnny Stompanato, Mickey Cohen’s ex-bodyguard, who says Meeks was trying to sell a large stash of heroin he had stolen.

Earlier, Vincennes helped Hudgens to set up actor Matt Reynolds in a homosexual tryst with District Attorney Ellis Loew. After Reynolds is murdered, a guilt-ridden Vincennes joins Exley’s investigation to find the killer. Vincennes later confronts Smith with evidence that Meeks and Stensland worked together under Smith’s command a decade earlier, and dropped an investigation on Patchett, who had Hudgens photographing businessmen with hookers in a blackmail scam. Smith suddenly shoots Vincennes, who dies after murmuring “Rollo Tomasi”, a name which Exley told him in confidence.

The next day, Exley’s suspicions are aroused when Smith asks him who “Rollo Tomasi” is. During an interrogation of Hudgens, Smith arranges for White to see photos of Lynn having sex with Exley, which sends White leaving in a rage to find him. At the police station, White and Exley fight, but stop when both realize that Smith is corrupt. They deduce that Stensland killed Meeks over the stolen heroin, and that the Nite Owl killings were to allow Smith to kill Stensland. The three African-Americans were framed by evidence planted by Smith’s men. Finally cooperating, Exley and White interrogate Loew, and learn that Smith and Patchett (aided by Hudgens’ blackmail photos) have been taking over Mickey Cohen’s criminal empire, and that the killings were because of Smith tying up loose ends. They later find Patchett and Hudgens murdered.

Smith lures Exley and White into an ambush. After the pair kills Smith’s hitmen in a gunfight, White and Smith wound each other. Smith tries to surrender to arriving police, but Exley shoots him dead. At the police station, Exley explains what he, Vincennes and White learned about Smith’s corruption. The LAPD thus decides to protect their image by saying Smith died a hero in the shootout, whilst awarding Exley a second medal for bravery. Outside city hall, Exley says goodbye to Lynn and White before watching them drive off to Lynn’s home in Arizona.