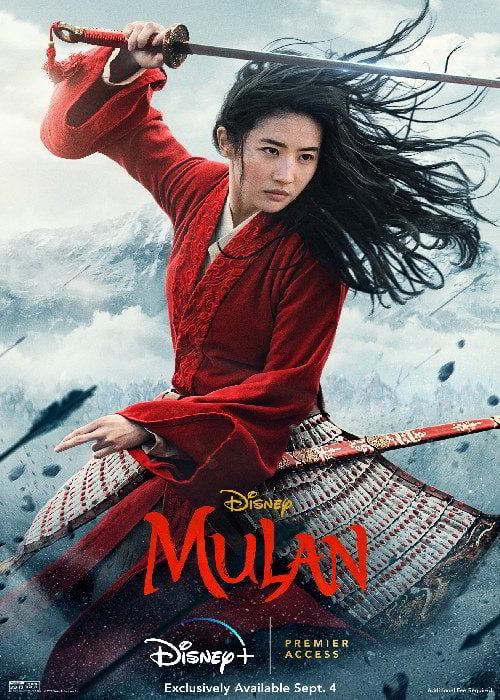 A young Chinese maiden disguises herself as a male warrior in order to save her father.

Purposeful and energetic Mulan was born into the family of a brave warrior Hua, who for a long period bravely defended his country and repulsed the attacks of insidious opponents who encroached on their territory. From a very tender age, the girl studied the art of war and was engaged in martial arts, dreaming of glorifying her dynasty during the next fierce battle. But instead, the parents unexpectedly said that she urgently needed to learn all the qualities of a good wife – meekness, discipline and restraint, because the matchmaker had already picked up a worthy groom from an old family, and the wedding would soon take place.

Fortunately, the news of the approaching enemy prevented the implementation of the parental plans. The northern invaders were advancing rapidly towards China, and the government ordered each family to send one of the men to the Imperial army. The main character had no brothers, so the only candidate was her elderly father, whose death she could not allow. The beauty, secretly changing into men’s clothes and cutting off her beautiful long hair, went to the camp, where young inexperienced youths were trained. None of those around him knew that a fragile girl, whose name would be glorified after centuries, was desperately fighting next to everyone else.


In rural imperial China, Hua Mulan is an adventurous and active girl, to the disappointment of her mother who hopes that one day she will be wed to a good husband. Once Mulan reaches young adulthood, she is forced to meet with a matchmaker and bring honor to her family. In the northwestern regions, an outpost is invaded by Rouran warriors, under the leadership of Bori Khan. They are assisted by the witch Xianniang, who is able to shapeshift to infiltrate the town. Xianniang transforms herself to appear as an imperial soldier to report of the attack to the Emperor of China; he then issues a conscription decree for one man in each family.

Imperial soldiers arrive in Mulan’s village to enlist recruits, and her elderly and frail father, Zhou, is forced into the ranks as he is sonless. Mulan realizes that her father has no chance of survival, flees with his armor, horse, and sword to join in his place under disguise. Mulan arrives at the training camp, which is run by Commander Tung, who had previously served with Zhou in the previous war. Mulan hides her gender and succeeds in training.

Bori Khan’s army continues to advance, causing Tung to end training early and send his battalion to fight. Mulan chases some of Bori Khan’s troops on horseback, but is confronted by Xianniang, who knows that Mulan is hiding her gender. She attempts to kill Mulan, who is saved because of her leather armor that she used to hide her feminine figure. Mulan decides to stop hiding her gender, and rides back to battle, causing many Rourans to flee when they suspect she is a witch. The Rourans begin attacking with a trebuchet, but Mulan routs them and begins attacking from above. The Rourans turn their trebuchets towards Mulan, but their attacks trigger an avalanche, which buries them.

Mulan rides back to camp and rescues Chen Honghui, a fellow soldier who she befriended. When she reveals that she is a woman, she is expelled from the army and begins her return home. On her way, she is confronted by Xianniang, who reveals that she was an outcast for being a powerful woman, and the only way she can gain power is under Bori Khan’s leadership. Additionally, she reveals that the attacks on the outposts have been a diversion, as Bori Khan intends to capture the Emperor, who killed his father. Risking execution, Mulan returns to her battalion to tell them of the impending capture. Tung decides to believe her, and sends a unit to the Imperial City.

Xianniang disguises herself as the Chancellor, and advises the Emperor to meet Bori Khan for single combat, while removing the city guard from their posts. Bori Khan kills the Emperor’s guards, and prepares to burn the Emperor alive in revenge. Mulan arrives in the city as the Rourans begin their attack, and races to free the Emperor. Bori Khan shoots an arrow at Mulan, but Xianniang, who admires Mulan for leading her army openly as a woman, transforms into a bird and sacrifices herself by catching the arrow. Mulan fights with Bori Khan and kills him, but loses her father’s sword in the process. She frees the Emperor, who offers to let her join his personal guard. She declines the offer and returns to her village, where she is reunited with her family. An emissary from the Emperor, under the leadership of Commander Tung, arrives to present Mulan with a new sword, and offer her another chance to join the Emperor’s Guard.