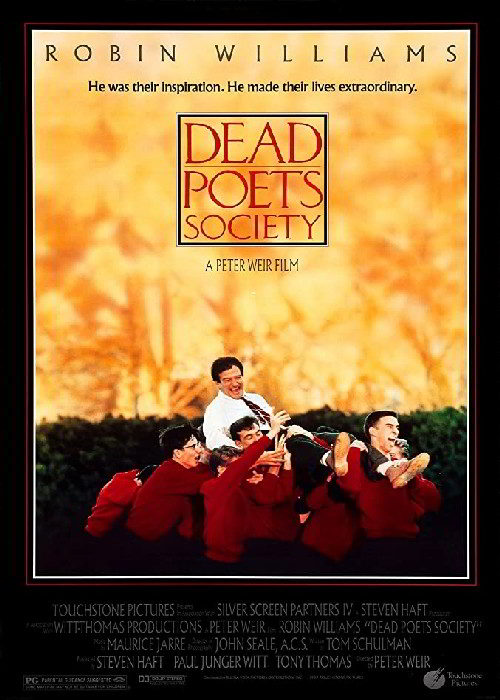 Taglines: He was their inspiration. He made their lives extraordinary.

The events of the movie take place on the territory of a closed college, in which there is a whole set of strict rules, because of which students feel here as if in prison. However, their parents are confident that it is here that they will grow full-fledged citizens who can achieve great success in life. All the teachers in this college are stiff and extremely unpleasant. They follow strict guidelines and do not allow students to develop creatively. But everything changes with the advent of a new teacher.
This man was radically different from the rest. He was extremely easy to communicate and easily found a common language with each of the students. It was possible to communicate with him on any topic, and the teaching methods of the new teacher were much more original than the rest. He immediately liked the whole class. They go to his subject as a holiday, as there is always a place for jokes and breathtaking stories. Soon he devotes several of his students to the secret of the distant past. It’s about a mysterious club called the Society of Dead Poets, which was created many years ago. This will change the lives of these guys once and for all.

In the autumn of 1959, shy Todd Anderson begins his senior year of high school at Welton Academy, an all-male, elite prep school. He is assigned one of Welton’s most promising students, Neil Perry, as his roommate and is quickly accepted by Neil’s friends: Knox Overstreet, Richard Cameron, Stephen Meeks, Gerard Pitts, and Charlie Dalton.

On the first day of classes, they are surprised by the unorthodox teaching methods of the new English teacher, John Keating. A Welton alumnus himself, he encourages his students to “make your lives extraordinary”, a sentiment he summarizes with the Latin expression carpe diem, meaning “seize the day.”

Subsequent lessons include having them take turns standing on his desk to demonstrate ways to look at life in a different way, telling them to rip out the introduction of their poetry books which explains a mathematical formula used for rating poetry, and inviting them to make up their own style of walking in a courtyard to encourage them to be individuals. His methods attract the attention of strict headmaster Gale Nolan.

Upon learning that Keating was a member of the unsanctioned Dead Poets Society while he was at Welton, Neil restarts the club and he and his friends sneak off campus to a cave where they read poetry and verse, including their own compositions. As the school year progresses, Keating’s lessons and their involvement with the club encourage them to live their lives on their own terms. Knox pursues Chris Noel, an attractive cheerleader who is dating Chet Danburry, a football player from a local public school whose family is friends with his.

Neil discovers his love of acting and gets the role as Puck in a local production of A Midsummer Night’s Dream, despite the fact that his domineering father Thomas wants him in the Ivy League (and ultimately medical school). Keating helps Todd come out of his shell and realize his potential when he takes him through an exercise in self-expression, resulting in his composing a poem spontaneously in front of the class.

However, Charlie takes things too far when he publishes an article in the school newspaper in the club’s name demanding that girls be admitted to Welton. Nolan paddles Charlie to coerce him into revealing who else is in the Dead Poets Society, but he resists. Nolan also speaks with Keating, warning him that he should discourage his students from questioning authority. Keating does admonish the boys (in his manner), warning that one must assess all consequences.

Thomas discovers Neil’s involvement in the play and forces him to quit on the eve of the opening performance. Devastated, Neil goes to Keating, who advises him to stand his ground and prove to Thomas that his love of acting is something he takes seriously. Thomas unexpectedly shows up at the performance. He takes Neil home and says he has been withdrawn from Welton, only to be enrolled in a military academy to prepare him for Harvard so he will become a doctor. Unable to find the courage to stand up to his father, and lacking any support from his concerned mother, a distraught Neil commits suicide.

Nolan investigates Neil’s death at the request of the Perry family. Cameron blames Neil’s death on Keating to escape punishment for his own participation in the Dead Poets Society, and names the other members. Confronted by Charlie, Cameron urges the rest of them to let Keating take the fall. Charlie punches Cameron and is expelled. Each of the boys is called to Nolan’s office to sign a letter attesting to the truth of Cameron’s allegations, even though they know they are false. When Todd’s turn comes, he is reluctant to sign, but does so after seeing that the others have complied and succumbing to his parents’ pressure.

Keating is fired and Nolan (who taught English at Welton before becoming headmaster) takes over teaching the class, with the intent of adhering to traditional Welton rules. Keating interrupts the class to gather his leftover belongings. As he leaves, Todd stands up on his desk and says “O Captain! My Captain!”, which prompts the other members of the Dead Poets Society (except for Cameron) to do the same, to Nolan’s fury and Keating’s pleased surprise. Touched by this gesture, Keating proudly thanks the boys and departs.