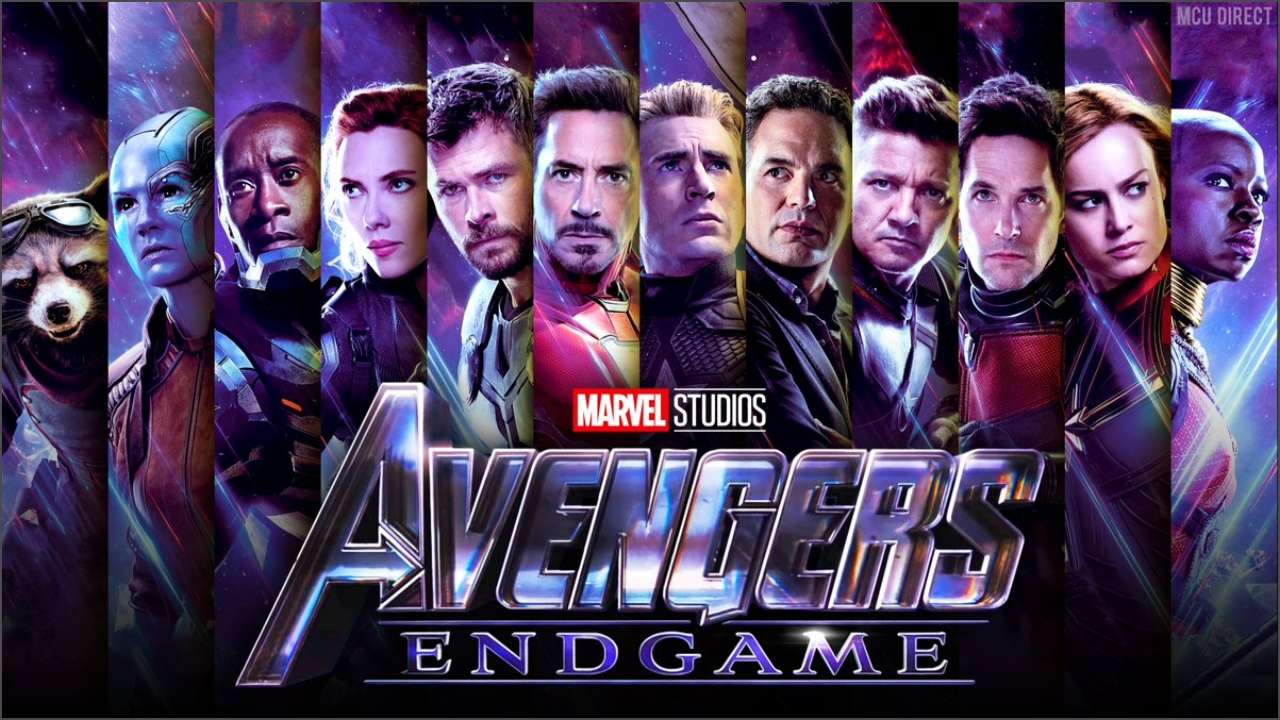 After the devastating events of Avengers: Infinity War (2018), the universe is in ruins due to the efforts of the Mad Titan, Thanos. With the help of remaining allies, the Avengers must assemble once more in order to undo Thanos’ actions and restore order to the universe once and for all, no matter what consequences may be in store.

The film was announced in October 2014 as Avengers: Infinity War – Part 2, but Marvel later removed this title. The Russo brothers joined as directors in April 2015, with Markus and McFeely signing on to write the script a month later. The film serves as a conclusion to the story of the MCU up to that point, ending the story arcs for several main characters. Filming began in August 2017 at Pinewood Atlanta Studios in Fayette County, Georgia, shooting back-to-back with Infinity War, and ended in January 2018. Additional filming took place in the Metro and Downtown Atlanta areas, New York, Scotland, and England. The story revisits several moments from earlier films, bringing back actors and settings from throughout the franchise as well as music from previous films. The official title was revealed in December 2018. With an estimated budget of $356 million, it is one of the most expensive films ever made.

Avengers: Endgame was widely anticipated, and Disney backed the film with Marvel’s largest marketing campaign. It premiered in Los Angeles on April 22, 2019, and was theatrically released in the United States on April 26, as part of Phase Three of the MCU. The film received praise for its direction, acting, musical score, action sequences, visual effects, and emotional weight, with critics lauding its culmination of the 22-film story. It grossed nearly $2.8 billion worldwide, surpassing Infinity War’s entire theatrical run in just eleven days and breaking numerous box office records, including becoming the highest-grossing film of all time. The film received numerous awards and nominations, including a nomination for Best Visual Effects at the 92nd Academy Awards, three nominations at the 25th Critics’ Choice Awards (winning two), and a nomination for Special Visual Effects at the 73rd British Academy Film Awards.


Twenty-three days after Thanos used the Infinity Gauntlet to disintegrate half of all life in the universe, Carol Danvers rescues Tony Stark and Nebula from deep space and returns them to Earth, where they reunite with the remaining Avengers—Bruce Banner, Steve Rogers, Thor, Natasha Romanoff, and James Rhodes—and Rocket. Locating Thanos on an uninhabited planet, they plan to use the Infinity Stones to reverse “the Snap”, but Thanos reveals he destroyed the Stones to prevent further use. Enraged, Thor decapitates Thanos.

Five years later, Scott Lang escapes from the quantum realm. At the Avengers compound, he explains to Romanoff and Rogers he experienced five hours, not years, while trapped. Theorizing the quantum realm could allow time travel, they ask Stark to help them obtain the Stones from the past to undo Thanos’ actions in the present. Stark refuses, thinking about his wife, Pepper Potts, and daughter, Morgan, but relents after musing on the death of Peter Parker. Stark, Rocket and Banner, who has since merged his intelligence with the Hulk’s strength, build a time machine. Banner notes changing the past does not affect their present; any changes instead create branched alternate realities. He and Rocket visit the Asgardian refugees’ new home in Norway—New Asgard—to recruit Thor, now overweight and drinking heavily, despondent over his failure to stop Thanos. In Tokyo, Romanoff recruits Clint Barton, now a vigilante following Thanos’ disintegration of his family.

Banner, Lang, Rogers, and Stark travel to New York City in 2012. Banner visits the Sanctum Sanctorum and convinces the Ancient One to give him the Time Stone. At Stark Tower, Rogers retrieves the Mind Stone, but Stark and Lang’s attempt to steal the Space Stone fails, allowing 2012 Loki to escape with it. Rogers and Stark travel to S.H.I.E.L.D. headquarters in 1970, where Stark obtains an earlier version of the Space Stone and encounters his father, Howard. Rogers steals Pym Particles from Hank Pym to use in returning to the present, and spies lost love Peggy Carter.

Meanwhile, Rocket and Thor travel to Asgard in 2013, extracting the Reality Stone from Jane Foster and retrieving Thor’s hammer Mjolnir. Barton and Romanoff travel to Vormir in 2014, where the Soul Stone’s keeper, the Red Skull, reveals it can only be acquired by sacrificing someone they love. Romanoff sacrifices herself, allowing Barton to obtain the Soul Stone. Nebula and Rhodes travel to Morag in 2014 and steal the Power Stone before Peter Quill can. Rhodes returns to the present with the Power Stone, but Nebula becomes incapacitated when her cybernetic implants link with those of her past self, allowing 2014 Thanos to learn of his fate at the hands of the Avengers. Thanos replaces present-day Nebula with 2014 Nebula.

Reuniting in the present, the Avengers place the Stones into a technological gauntlet Stark, Banner and Rocket have created. Banner, the most resistant to the Stones’ gamma radiation, is chosen to wield the gauntlet and reverses the disintegrations. Meanwhile, 2014 Nebula uses the time machine to transport 2014 Thanos and his warship to the present, where he attacks the Avengers’ compound looking for the Stones. Present-day Nebula convinces 2014 Gamora to betray Thanos but is unable to convince 2014 Nebula and is forced to kill her. Confronted by Stark, Thor, and a Mjolnir-wielding Rogers, Thanos outmatches them and summons his army from his warship. Stephen Strange arrives with other sorcerers, the restored Avengers and Guardians of the Galaxy, the Ravagers, and the armies of Wakanda and Asgard to fight Thanos and his army. Danvers arrives and destroys Thanos’ warship, but Thanos overpowers her and seizes the gauntlet. Stark steals the Stones and uses them to disintegrate Thanos and his army, at the cost of his own life.

Following Stark’s funeral, Thor appoints Valkyrie as the new ruler of New Asgard and joins the Guardians. Rogers returns the Infinity Stones and Mjolnir to their original timelines and remains in the past to live with Carter. In the present, an elderly Rogers passes his shield and mantle to Sam Wilson.